last time Antoine Ruel played Standard at a premiere event, he went 6-0 with Critical Mass at Worlds, a deck he said he was underwhelmed by in spite of his exceptional performance in Yokohama. His new deck, however, is anything but underwhelming. Dubbed Owling Mine by most of the players running it (who seem to be either French or Japanese), it relies on keeping its opponent's hand full and then using both Ebony Owl Netsuke and Sudden Impact to erase their life total. 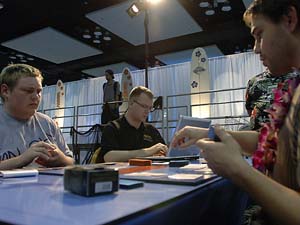 "I don't know why you are covering this one," lamented Rich Hoaen, "I can't possibly win."

Hoaen's slow green-white-black deck would need to get a bit lucky to get enough mana and pressure on the board to trouble Ruel. Loxodon Hierarchs can offset some of the damage from the Owls, but once that deck gets rolling, it can do explosive amounts of damage in very little time.

Ruel led off with the rather filthy start of Howling Mine and Ebony Owl Netsuke to Hoaen's land and Orzhov Signet. This meant Richie was immediately taking four from the piece of Japanese kitsch, an issue further complicated by Gigadrowse on his land and then Exhaustion plus Eye of Nowhere a turn later. Hoaen gained an extra turn by casting Loxodon Hierarch, and then another by doing it again, making an interesting race of things. Meanwhile, Ruel kept doing his thing, using Mikokoro to keep Hoaen's hand full for the Netsuke, even when Rich was casting instants in his upkeep with the Owl's trigger on the stack.

Things were extremely tense, with Ruel having to Remand and then Eye one of Hoaen's Hierarchs just to stay alive at two life, but that gave him just enough time to find Sudden Impact and end Hoaen's hope for a comeback.

Hoaen mulliganned to four on the play in Game 2, while Ruel also took a mulligan, noting that if there were any deck where Hoaen had a decent chance of winning after a mulligan to four, it's against Owling Mine. 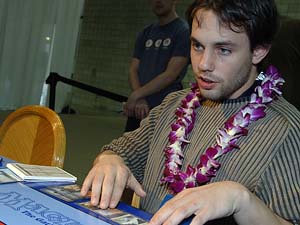 Antoine's Exhaustions were the difference

It looked like that prediction would prove fortuitous, with Ruel stalling on two lands, while Hoaen just played lands and Signets until he could cast a Loxodon Hierarch. Ruel had a Netsuke on the board from the start, but Hoaen was hardly in danger of having seven cards in his hand. However, a well-timed Exhaustion plus a Howling Mine made that more of a danger, and suddenly Hoaen looked like he could be in danger.

Hoaen's Hierarch began to beat down, joined shortly by a saproling token, and then another Hierarch, but Ruel again found an Exhaustion to slow the beatings before casting Kami of the Crescent Moon. Hoaen was still at a comfortable 24 life when he cast Distress, stealing a Boomerang and revealing Gaze of Adamaro and Sudden Impact in Ruel's hand.

Hoaen attacked Ruel to seven with his Hierarch, but was hit by a third Exhaustion on Ruel's turn, giving him just enough time to Impact and Gaze Hoaen out of the match.

"Three Exhaustions? Hooow lucky," was Hoaen's lament, as he dropped to 5-2 on the weekend. Ruel is now 6-1 and looking to put himself in great position for another Sunday appearance.