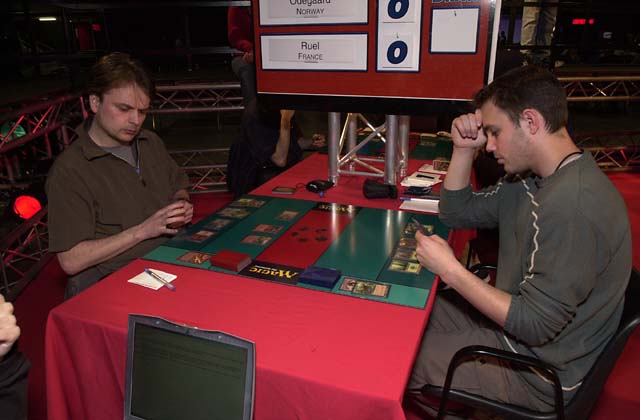 Ødegaard made to the seven round cliffhanger with three round wins: a bye, a match win because of ejection and an actual normal round win. Antoine, on the other hand, had to face Jon Finkel, Kai Budde and Gary Wise! After such a different Day 1 they crossed paths in the Feature Match area for what Mark Rosewater deemed the Battle for Day 2.

Ødegaard played a Fertile Ground on his second turn while Antoine showed his offensive colors with an unkicked Kavu Aggressor. After some moments to consider his options the Norwegian used a Tribal Flames to kill the helpless Kavu. He then played a Quirion Sentinel and a Thunderscape Master (with mana to use any of the two abilities).

Ruel used an Aggressive Urge on the Sentinel to dig deeper into his deck looking for an answer. A Kavu Scout joined Ødegaard's army. A semi-answer finally came in the form of a Stone Kavu. While this obviously didn't solve the Master problem it enabled Antoine to trade it for the Sentinel on the next attack thus slowing his massive bleeding.

Øyvind was not seating idly on the pure strength of his Master and added a Yavimaya Barbarian to his horde. Antoine had another big creature in Sulam Djinn, which unlike the Stone Kavu could take out attackers with impunity. Ødegaard didn't give it any time to do anything interesting though, simply swinging in, then draining Antoine and delivering the finishing blow with a Darigaaz's Charm.

Despite the loss in such important match, Antoine still made a few jokes before sinking into silence for the always-important period of sideboarding. After a few more jokes and complains about the spotlights they started the second game with Antoine playing a second turn Firebrand Ranger. 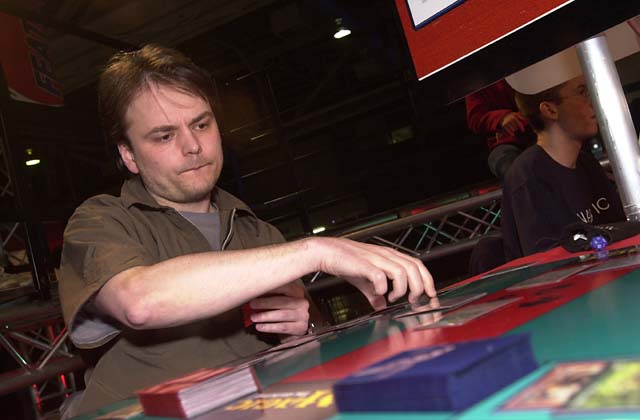 Øyvind's first creature was a Thornscape Familiar quickly followed by a Quirion Sentinel and a Fires of Yavimaya. The Familiar walked into the Ranger on the next turn. Antoine seemed unable to draw any playable spells and the Fires gave Øyvind some extra speed.

Then the fabled Plains showed up and Antoine finally got the chance to play his Crimson Acolyte.

Øyvind: "Not too bad Antoine."

Ødegaard added another Phyrexian Bloodstock to his ever-attacking damage machine. Antoine then found his long lost friend Sulam Djinn to stop the Norwegian swarm. Ødegaard simply peeled his Master once again and after much noise played it, drawing a huge frown from a scared Antoine. 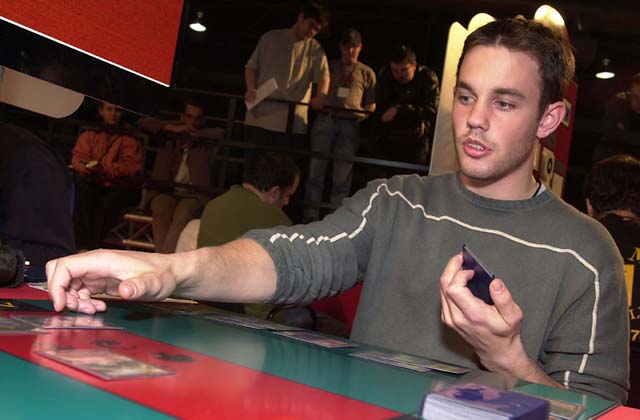 The attack, now powered by the Master, forced the Djinn to chump block the Bloodstock. Despite his highly problematic situation, Antoine against found a blocker in Verdeloth, the Ancient with two tokens but to no avail. He was now in Master drain-Tribal Flames range. That was his destiny in the next turn thus ending an extremely fast and bloody round.

Øyvind made it to the second day and Antoine was relegated to the stands to cheer for his brother, Olivier. Despite that they left the Feature Match in a very good mood doing what Magic players do best: complain about their luck.