Neither of these players is a stranger to the spotlight of the feature match area. Belgium's Christophe Gregoir has a Grand Prix as well as a Pro Tour Top 8 from a couple of years back, while Fabrizio Anteri made it to the Top 4 of two Grand Prix last year. This time, however, they met with scores of 4-2 each, needing three straight wins to even clinch a Day 2 berth!

The match-up here was Elves, played by Gregoir, versus Anteri's Storm. Both combo decks are capable of killing within the first three turns, but where Elves offers a little more resilience and can win in various ways, Storm is clearly ahead in pure speed. This, of course, bodes ill for Gregoir. 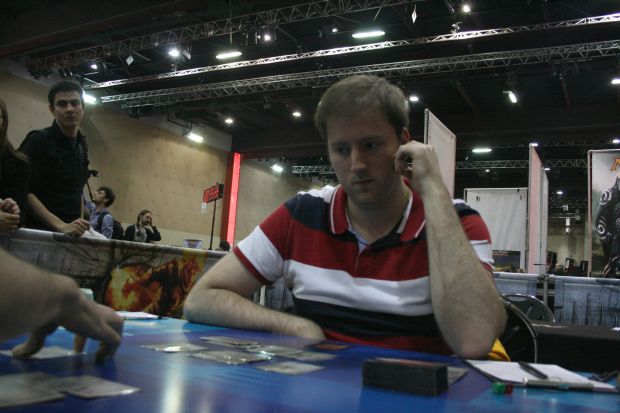 Anteri went first, but Gregoir had the first play in Deathrite Shaman. Then Anteri's Gitaxian Probe revealed another Deathrite Shaman, Heritage Druid as well as Crop Rotation and two Green Sun's Zeniths in Gregoir's hand. Zeniths and Crop Rotation were quickly discarded with two copies of Cabal Therapy, though.

With his hand thus demolished, Gregoir made some Elves, but those were getting nowhere, while Anteri had all the time in the world to set up his combo. Preordain, a pair of Lotus Petals, a pair of Lion's Eye Diamonds, and Infernal Tutor for Past in Flames sealed the deal. 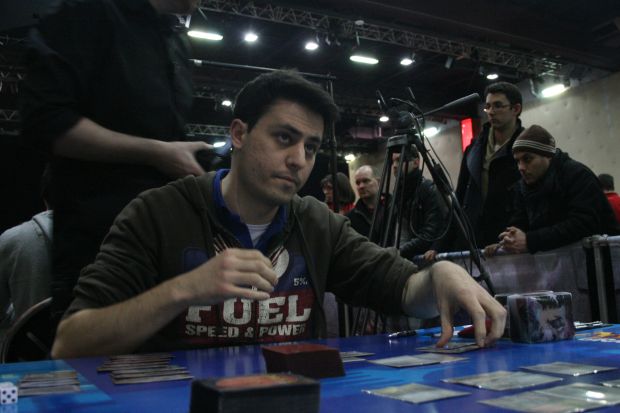 Unfortunately, Gregoir was forced to mulligan seven cards which included some sideboarded discard spells, and was left with the rather slow start of Llanowar Elves on turn one, Dryad Arbor and Scavenging Ooze on turn two.

When asked about the six-card hand he kept, Gregoir explained that it wasn't great but, "It did have a turn-three Natural Order."

"What do you get with that?" Anteri asked. "I'm sorry. I don't know the format very well." Gregoir showed him Ruric Thar, The Unbowed. Anteri was impressed. "Yup, that would have been game."