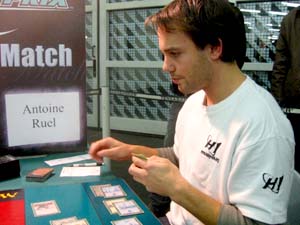 match was a tale of classic European rivalry - Germany against France. Kuhn has been around for a quite a while and he is one of those German names you notice at the top of the tables every once in a while. His two Worlds Top 8's might have something to do with that.

Antoine is mostly known for his Team. Together with his brother Olivier and Floreunt Jeudon they are one of the oldest Teams on the Pro Tour. That doesn't mean he can't survive on his own. A long-time Pro Tour regular, he has a number of strong individual finishes to his credit.

Game 1:
Antoine got a gasp out of Janosch when he came out with the classic "Skyhunter Cub, Bonesplitter" start, followed by Neurok Spy. Kuhn opened with a much more pedestrian Banshee's Blade but he did have Goblin Replica to eat up the equipment.

He followed it with Yotian Soldier but Ruel had Viridian Logbow to power his Cub once again. Again, the German spent a few moments considering the board. But this time he had no answer to his problems. With a shrug and a smile he conceded the match, seven minutes into the round. Sometimes there is just nothing you can do.

Game 2:
This time Kuhn was the one who came out screaming. Leonin Scimitar followed by Leonin Den-Guard.

The French went about play Myrs while his opponent brought forth the beatdown, adding Skyhunter Patrol to the mix. Ruel's mana advantage did help him play a Pewter Golem but Janosch was in a rush to reach the third game. Another swing dropped the French to nine before he added Quicksilver Elemental to the mix.

The Golem and the Elemental gang-blocked the armed Den-Guard. In the end only the Golem survived to tell the tale. The Patrol grabbed the loose Scimitar but Antoine had an answer to the flying threat: entwined Betrayal of Flesh bringing back his Elemental.

Kuhn frowned. His best play was Yotian Soldier, now armed with Leonin Scimitar. It seemed little when compared with Antoine Ruel's board. Still, he had the French at seven. All he had to do was find a way to deal those final points.

With only two lands and two Myrs Ruel pumped out Wizard Replica and Viridian Longbow. Kuhn drew his sixth land with a smile.

Right. Triskelion. After attacking with the Soldier. The three shots took out the Elemental (who had blocked the Soldier) and a Myr. Antoine had just lost his best creature and one fourth of his mana. He played Leonin Skyhuner and passed the turn.

Kuhn responded with a new problem: Fireshrieker. This helped the Yotian Soldier drop Ruel to a mere three. The Frenchman was in deep trouble. He played his own Leonin Scimitar send two creatures into the Red Zone.

Assured, he played Goblin Replica and before he could even activate it Antoine Ruel was scooping. 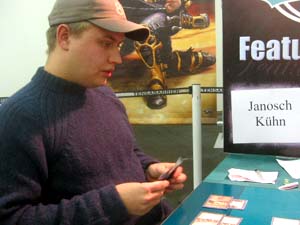 He didn't get exactly the same one... he had an even better one. First turn Bonesplitter, second turn Leonin Skyhunter, third turn Skyhunter Cub. Janosch's Leonin Den-Guard, Banshee's Blade paled in comparison.

On his fifth turn Ruel dropped Kuhn to eight and played Pewter Golem. Janosch tried to fight back with Skuhunter Patrol but the Frenchman was on a pure rampage. Irradiate cleared the skies for his squad and Janosch Kuhn slipped to a mere three.

The German spent a few minutes agonizing during his turn...

This did the math and came to the same conclusion. Janosch conceded.