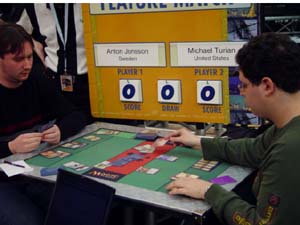 players are 6-0, although Jonsson was quick to point out that he felt he had been getting lucky all day. Turian responded, "Well, you have to get lucky to go 6-0." This is the third draft of the day, and the winner will go to sleep with a perfect 7-0 record, and both will start tomorrow with the exact same deck.

Jonsson played a first turn Auriok Transfixer, and Turian played Sunbeam Spellbomb. The curve continued as Jonsson played a turn two Leonin Skyhunter, and a Viridian Longbow. Raise the Alarm on end step gave Jonsson even more threats, while Turian just had a Talisman and Neurok Hoversail. Altar's Light took care of the Longbow, but Jonsson team still got through for five damage. Arrest stopped the Skyhunter, so the 1/1s attacked for three, bringing Turian to eight. Blinding Beam slowed things down even more, and Jonsson summoned Hematite Golem. Turian played Goblin Replica, and had enough mana left over to activate it if need be. It traded with the Golem, and Jonsson kept the threats coming with Skyhunter Cub. Turian had yet another Blinding Beam, so only the Soldier tokens attacked, bringing him down to five. Electrostatic Bolt and Awe Strike couldn't prevent the inevitable, as Turian ran out of cards that would slow down Jonsson's attack. 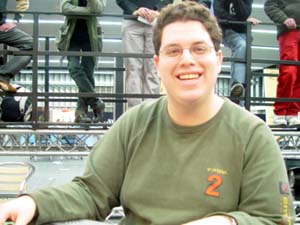 Turian started with a Longbow, and Jonsson cast Chromatic Sphere. Steel Wall came out on turn two, as Turian missed his second land drop. Jonsson played a Talisman and a Longbow, and Turian played a Longbow of his own. Jonsson was stuck at two lands himself, but the Talisman allowed him to play a Cathodion. Turian finally drew a second land, and used it to play a Talisman. The Steel Wall blocked the Cathodion, and Granite Shard came out to deal the final point of damage and kill it. Turian untapped, and used Electrostatic Bolt to kill the Cathodion. Jonsson summoned Goblin War Wagon, and Turian simply cycled through a Spellbomb. Vulshok Gauntlets on the Wagon gave Jonsson a seven damage attacker, and Turian played Goblin Replica. Jonsson chose not to untap the Wagon, and played a second Granite Shard to get a sarcastic "great" out of Turian. The Shards took down the Replica, and Turian attacked with a Berserker for three. The Wagon now untapped and dealt eight damage thanks to a Leonin Scimitar, bringing Turian to three where the Shards would have been able to finish him off. A Sunbeam Spellbomb provided five life to barely keep him alive, and the Shards killed the Berserker. Blinding Beam stopped the Wagon for one attack, since it untapped thanks to its special ability on the following turn. Turian's Skyhunter Cub was tapped down with Blinding Beam, letting the Wagon get through for the win.