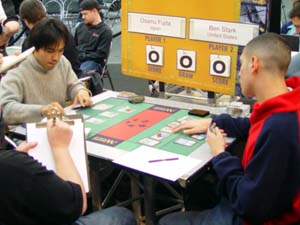 Neither of them has played in the Top 8 of the Pro Tour and at identical 5-1 records thjey were each in good shape to make a run at it this weekend. They were each relying on busty rares-Bosh for Osamu and Broodstar for Stark-to carry them through the draft.

Ben Stark has been one of the few rising stars on the American Magic scene. He has been critical that he does not get enough features despite his recent tear. "Like getting featured but they never give tem to me unless I am like in third place." He considered this for a second and added, "That could be what dirves me to do so well..."

Ben can usually be counted on for some witty banter with his oppoinents before the match but the language barrier and the brutally long day made for an unusually quiet feature, "Sorry not the best chats. We need to get Mike Abraham here to try and get us to form a band."

Stark turned to his opponent who looked every bit as wearly as he did, "Wanna just play one game so we could get to sleep sooner?"

When Fujita declined, Stark shrugged, "Just a thought" and the match was underway.

Ben was on the play and kept a hand with a pair of Myr and a Serum Tank. Fujita kept shopping for a keeper. First he shipped back a five land, Joiner, Bosh debacle and then could not keep a one lander replete with six and seven drops. He finally settled on a two land, Joiner, Archers, Bolt hand.

Ben was drawing two cards a turn thanks to his Serum Tank but the Archers kept his army of artifact creatures at bay including Myr Enforcer and Cobalt Golem. Even his turn seven Beserkers chose not to attack and when Fujita's steady stream of lands allowed him to cast a seventh turn Bosh it looked like all of Ben's card drawing my have been in vain but when he paid two blue to counter it with Assert Authority a loud "Ding!" came from spectating Gabriel Nassif.

Stark played a Mask of Memory and put it on an Iron Myr ans sent his entire team into the middle of the table. Fujita's Condor ate the masked Myr and the Archers ate a Beserker. Ben played a Neuok Spy.

When Ben masked the Spy and attacked, Fujita used the Bolt he had been clinging to for so long. Despite his double mulligan, Fujita was flooded with land and could not cope with a 10/10 Broodstar with Mask of Memory.

Ben won the game with less than ten cards in his deck. It was the eleventh turn of the game. 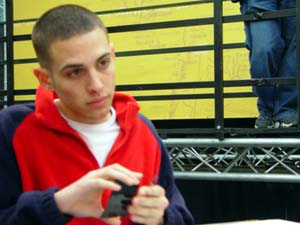 Fujita did not mulligan this time and opened with a Bonesplitter and played a Gold Myr on turn two. Ben had three Spellbombs in play by the end of his second turn-green, black and blue. Fujita did not have a third land but was able to play his Spikeshot Goblin. Stark's Spellbombs allowed for a fourth turn Myr Enforcer.

Osamu had the Deconstruct-although still no land-and he used one of his green to equip the Goblin and attack. He took two burn from the remaining green not realizing he could simply reequip the goblin twice more. Ben had no creatures but played a Mask of Memory. Fujita remained stuck on two lands and attacked for one with his Myr. Ben cycled a spellbomb and then bounced the Spikeshot EOT and fell to thirteen from the goblin's activation.

He played an Iron Myr and passed the turn back to Fujita who was wary of Assert Authority. He chose not to play the Spikeshot and played a Krark-Clan Shaman and equipped it instead. Ben played an Atog and sent the turn back still representing the counterspell.

Fujita missed his seventh straight land drop and passed the turn back with a scowl for his deck. Ben played a Chromatic Sphere and attacked with a masked Atog. The Jpanese player blocked with his 3/1 Shaman and Stark was content to trade.

Fujita finally found land and cast Vulshok Beserkers but Stark broke his Sphere to counter it with Assert Authority. Ben put the mask on his Myr and snuck in for a point and two cards. He pitched a Neurok Spy and played a Pewter Golem.

Fujita was clear to play the Spikeshot and did so. Ben's masked Pewter Golem came in unmolested and he played a Chromatic Sphere and a 5/5 Broodstar. Fujita used Battlegrowth on his Goblin EOT. He untapped and used a Viridian Shaman to smoke the Mask and with the help of the Bonesplitter shoot down the 4/4 Broodstar.

Ben could not find anything that could get around the four point ping machine and they were soon onto Game 3.

Ben opened with a Talisman and a Mask of Memory on turn three but no third land or creatures. Fujita had the third turn Spikeshot but no equipment. Ben's land came back and he was able to play a Cobalt Golem. Fujita responded with a Clockwork Condor. 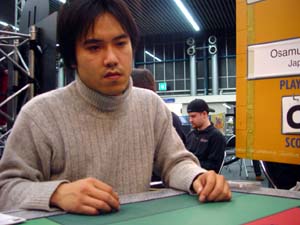 Ben dropped a Great Furnace, Myr Enforcer and Lodestone Myr and Masked up his now 8/8 flier. "I am trying to remember if you have Grab the Reins but I guess we'll find out."

Tomi Walamies was the lucky opener of Grab the Reins and Osamu could not contend with the jewel of the affinity crown or the Lodestone Myr much less both.