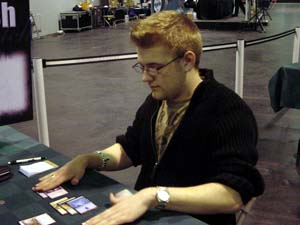 Areliursarson used to be a fairly frequent visitor to the GP scene but hasn't been seen much recently. The Icelander has played on his national team twice. Tom Harle was the last English national champion before the UK national championships were devolved into their respective countries. He also made the national team back in 2000.

Both players have fairly strong decks so unsurprisingly some fairly broken things happened. Harle started out with a Leaden Myr and then used affinity to accelerate out first a Razor Golem then a Frogmite and Somber Hoverguard.

Areliursarson decided his Spikeshot Goblin wasn't powerful enough and upped it with an Oblivion Stone.

Harle tried to block the Slith only for Arielursarson to brutalise him by sacc'ing the Bruiser to Shrapnel Blast Harle to the head and use Modular to make the Slith a much bigger 4/4.

Harle found a Raise the Alarm, but by this time Arielursarson just had too many monsters to hold back.

The second game carried on from where the first had left off. Harle Deconstructed a Bonesplitter. Areliursarson replied by Shattering a Arcbound Fiend. Areliursarson found the Spikeshot Goblin that had proved so elusive for most of the tournament only for Harle to up it with a Pentavus. Harle then got to untap with the Pentavus in play. This is usually a "very bad thing" for any opponent.

Somehow Areliursarson managed to deal with it. Harle took off a couple of tokens to block a Stinger but when one tried to return a Barbed Lightning left it with nothing to return to.

The game then settled into a more normal limited match as Harle kept Areliursarson's Somber Hoverguard under control with a Loxodon Mystic while nibbling with the one remaining Pentavite token.

Areliursarson then bantered with the two spectators, asking them who they were supporting and saying it was one for each.

The game was tied up with Areliursarson at 5 and Harle at 7. A Spire Golem looked to give the Icelandic player the upper hand. Harle tried to force through the Firehrieker equipped Mystic. Areliursarson chumped and then wondered what tricks Harle had. He charged with everything. Harle had Altar's Light, but Areliursarson had a Razor Barrier and the damage knocked Harle to one. He followed with a blocker, an Arcbound Slith, to deal with Harle's Mystic.

He drew Oxidize and suddenly the game was onto a decider.

As if enough broken cards had been seen already Areliursarson decided to make Arcbound Ravager on turn 2. That was followed by another nice rare, Leonin Battlemage, and a Somber Hoverguard.

Harle had a Hoverguard of his own as well as a Frogmite and Neurok Prodigy.

The first real pause in the game came as Areliursarson pumped his Hoverguard twice with the Battlemage (casting Thoughtcast and Arcbound Slith). He sent the Ravager and Hoverguard in. Harle didn't block and Areliursarson thought for a long time. He pumped the Ravager up to 5/5 and pumped it with the Battlemage to do Harle a total of 10 damage. Harle was left at a precarious 7 life. He was fortunate as Areliursarson has miscounted and not realised he could kill him with the Shrapnel Blast in hand. 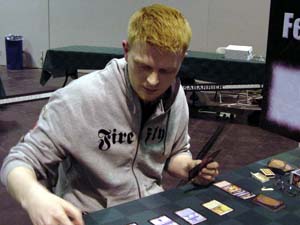 A Deconstruct on the Ravager gave Areliursarson fodder for the Shrapnel Blast and then he'd realised his mistake. Harle looked to make him pay as he added a Spire Golem to a menacing looking airforce.

Harle was only on a meagre two life. Areliursarson ripped a Spikeshot Goblin off the top and suddenly Harle had one turn to find an answer. He didn't and extended his hand.