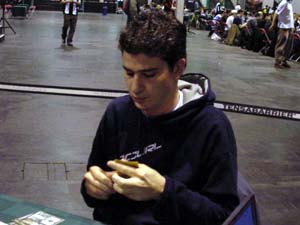 Jose won the flip, and elected to play. He kept his opener, as did Markus.

Jose led with a Forest, but Markus had the first play with a Swamp and a Pyrite Spellbomb. Both players accelerated with Myr, Jose's Iron, and Markus' Silver. Jose swung and made a third Myr. Markus cycled his Spellbomb, laid a land, and passed the turn glumly.

Jose swung in with both men and again Markus declined to engage his Myr in combat with Jose's. Jose played Journey of Discovery for two Swamps and passed. Markus played Thirst of Knowledge in Jose's end step, and after some thought discarded a Vault of Whispers.

Markus untapped and played a land, then Promise of Power for a 6/6 flyer! Jose was ready with a Psychic Overload for the Demon, sent his troops in right past it, and ended his turn.

After some consideration Markus made a Neurok Transmuter, a Leaden Myr, and passed. Jose paused to read the Transmuter, then killed it with an Echoing Decay and swung with both men. This time Markus sent his Myr to face Jose's, but a Predator strike made it an unfair contest. Markus untapped on the back foot at a mere 8 life, but with a grip full of cards. He played a Leonin Bola, equipped it to his Myr, and then made a Skullclamp. On Jose's turn the Myr tapped down the Spy, and Markus took one from Jose's Myr. Jose made a Fangren Firstborn and passed.

Markus untapped and considered his options again. He played out yet another land, put the Bola back onto the Myr, and made a Quicksilver Bohemoth. Jose nodded and took his turn.

Jose declared his attack, and Markus' Bola-wielding Myr again kept the Spy at bay. Jose held back, and with one card in hand passed the turn with eight mana open in four different colours. Markus played a Muriok Savaenger to recover his lost Myr, put his Bola to his Myr again and passed. Jose declared an attack and once more his Spy was thwarted by the Bola. After combat he made a Viridian Longbow, put it to his Myr to kill Markus', and after moving it again to the Firstborn passed the turn.

Markus did some maths, then used a Looming Hoverguard to return Jose's Myr to the top of his deck. The Scavenger came in to drop Jose's life total a bit. Jose untapped. He swung, and Markus discarded his Leaden Myr and a Pewter Golem to untap his huge Demon. Both the Behemoth and the Demon blocked the Firstborn, which took town the Bohemoth. Jose made a Myr, put the longbow onto the tapped Spy, and passed.

Markus, now on 5, surveyed the board. He put his Skullclamp on the Demon and swung in for 11. His Bola went to the Scavenger, and a Nim Lasher joined his troops.

Jose's Spy was tangled in the Bola, but shot Markus for one in response. Jose made himself a Wizard Replica, moved the bow to the Iron Myr, and passed over the turn.

After some considerable thinking time, Markus used the Skullclamp to draw two cards from the Nim Lasher. The Skullclamp then found it's way onto the Scavenger, and Markus swung in for seven. Jose declined to block, and Markus scooped to the three creatures that would ping him to death next turn.

As the players shuffled, Jose commented "Your deck is good!" Markus smiled and shrugged, "Not good enough."

Both players kept their opening hands, and Markus leads with a Swamp. Jose had a Forest and an AEther Spellbomb and a chromatic sphere.

Jose lays his third Swmp and made a Dross Golem. Come turn 3 Jose is online in all three of his colours. Markus makes an Island and a Lumengrid Augar. Jose announced a Somber Hoverguard, then sacrificed his Sphere to draw a card. Markus swung in for 5 and followed up with a Nim Replica, but no fifth land. Jose attacked with his Somber Hoverguard, played out a Swamp, and made a 5-mana Tangle Golem.

Markus' Nim attacked alone and trades for Jose's Tangle Golem, with the aid of it's activated ability. Markus found his fifth land and finished the turn with a Silver Myr.

All Jose had to do was to lay land number six and make a Talisman of Dominance. Markus' Golem went in for 3, and Markus made a most potent Darksteel Gargoyle. Jose laid yet another land and matches Markus with his own Gargoyle - snap!

Markus decided to dig with his Augar and ditched a Nusience Enginne, and then an Island, but with nothing else to do he passed the turn.

At this point Olivier Ruel assaulted me with a small furry puppet, and after surveying the board over my shoulder made a quick get-away.

Jose made a very impressive-looking Glissa Sunseeker, and a thoroughly indestructible Darksteel Pendant. Markus kept digging, ditching a Talisman, a Myr, and then an Island. He made Psychic Overload on Jose's Glissa and passed. Jose returned Glissa to his hand with his Aether Spellbomb at the end of Markus' turn, untapped, and replayed Glissa along with a Neurok Spy!

All Markus' digging with the Augar has left him well prepared, as he made an Echoing decay on Glissa, and then drew 5 cards from Promise of Power! He made a Skullclamp and passed the turn.

Jose used his Pendant for a sneaky peek in his upkeep, and after some deliberation sends Wizard replica to the bottom of his deck. His Spy drops Markus to 10, and apparently with nothing to do, he passed.

Markus untapped looking dominant, and then made a Duplicant! This tricky customer now only gave poor Jose's Gargoyle a good rogering, but also hung around as a 3/3 Gargoyle lookalike, albeit without the Gargoyle's airborne or indestructible properties.

Now with nothing to fear left of Jose's defensive forces, Markus swung in with a clamped Augar, a Dross Golem, and a Darksteel Gargoyle.

Jose thinks for a long time, before surprising us all by entwining a Betrayal of Flesh! He used it to kill the Dross Golem and bring back Glissa, which blocked and killed the Augar with her first strike ability.

Markus passed and Jose untapped and drew. He swung in and Duplicant chumped Glissa. Jose added Mephistic Ooze to his troops and passed again. Markus's Gargoyle dropped Jose to 3, and Consume Spirit finished him off.

A small cheerleading squad in the form of the Ruel Brothers turned up to support Jose, and the players swiftly shuffle and present their decks with but six minutes left on the clock.

Both players keep and Jose leads with Swamp, AEther Spellbomb. Markus had a swamp of his own, and Jose made his pendant once more. Markus has a turn-two Myr, and Jose a Granite Shard, casting a shadow over the Myr's life expectancy.

In a brave effort towards self-preservation, the Myr added it's mana to that of Markus' land in order to Psychic Overload the Granite shard. Jose took a peek at the top of his deck with the Pendant, kept the card, and made a Talisman.

Markus' used his fourth turn to make himself a Pewter Golem. Jose cycled his Spellbomb in response, presumably looking for an Annul but had no other responses. Jose peeked with the Pendant, rejected the card, and drew. He thought, shook his head, made a Wizard Replica, and passed. There were but two minutes left on the clock!

Markus rolled out a mask of memory, equipped it to the Golem and sent it in. Jose took four, and Markus drew two, and discarded an unwanted Island. Leaden Myr joined Markus' troops and he passeed the turn.

Jose untapped, declines to peek with the Pendant in his upkeep, and plays a Viridian Longbow. Echoing Decay killed the golem and with but 40 seconds left in the round, the outlook for a conclusion looked poor. 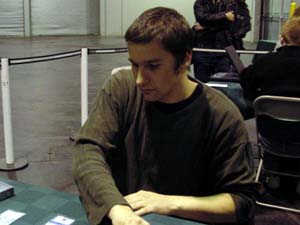 Markus used Looming Hoverguard to return Jose's Wizard Replica. Mark of Memory was equipped to the Hoverguard, and Markus passed.

Jose cast Betrayal of Flesh to kill the Hoverguard on the first turn of extra time, and Markus put a Mask of Memory on the Myr and attacked, desperately looking for a way to win in time. He played out a Nim Lasher, Jose rejected his top card, replayed the Wizard Replica, and passed back. Jose offered the draw, and with no way for either player to win in the allotted turns, Markus accepted.
Markus Joebstl 1 - Jose Barbero 1