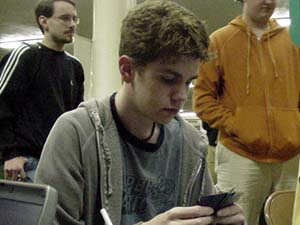 JB Smith is a Virginia area player who frequents the Dream Wizards PTQs in that neck of the woods. He was undefeated to this point--the hard way. He had no byes. His opponent this round was also undefeated without the benefit of byes. Kate Stavola is a former Wizards of the Coast employee and current fiancée of one Patrick Sullivan. Patrick was sitting just to her left in a match-up with Ken Krouner. It was perhaps the first side-by-side match-up of engaged/married players in feature match history.

Kate is among the best of the game's woefully small number of female players but she would hesitate to put herself at that top of that list. In her mind Melissa Del Toro holds the title. The competitive spirit that drives her also bristled at the sexist distinction. She was faring better than her betrothed who had one loss to this point--and he had the benefit of a three round pass.

Kate chose to draw without hesitation when she won the roll. JB's opening hand was not a keeper with six spells and one land. To make His decision even easier almost all of the spells were black and his one land was a Mountain. Kate nodded approvingly at her decision to draw.

Kate played a Viridian Longbow and JB came back with Arcbound Slith. Kate had a Slith Predator for her second turn but chose not to block the artifact man. JB had no third turn play but when Kate attacked he had Wail of the Nim to take out her Slith. Kate smoked his Slith with a Viridian Shaman.

JB had the third Slith of the match--a Bloodletter and passed the turn with mana up to regenerate. Kate equipped her elf and passed the turn. JB attacked and she blocked. When he regenerated she shot it and he chose to regenerate again. She killed it on her turn and played an Arcbound Bruiser. JB made short work of the Bruiser with an Essence Drain.

Kate attacked for two and played the Stangg-like Gemini Engine. JB sullenly cast a Dross Golem and took six from the Engine on the next turn. Kate followed up with Mirror Golem choosing to remove the Bloodletter from JB's bin--she could still equip it with the Longbow this way.

Kate showed off one of the reasons she was 6-0 so far when she equipped her Golem with Skullclamp. JB couldn't possibly keep up and glumly moved onto the second game.

Kate was all business and crisply asked, "Play or draw?" JB chose to play.

JB sent back his second hand of the match. This one contained five lands, Leonin Bola, and Vulshok Berserker. He kept his next six and led off with a Swamp. Kate kicked her turn off with a Bonesplitter and had the Slith Predator for turn two. JB overpaid for a Dross Golem with three Swamps in play and manaburned for one.

Kate equipped her Slith and it traded with the Golem. Iron Myr came down post-attack. JB picked up his Dross Golem with Moriok Scavenger but found himself under the gun next turn when Kate played out Tangle Golem and Skullclamp. He was holding an Echoing Ruin and had to decide what to aim it at--Golem or Clamp. He chose the Clamp and was able to replay the Golem with his remaining mana.

Kate forged a Leonin Scimitar and handed it to the Tangle Golem along with the Bonesplitter. It died and took down both of JB's creatures in combat. Kate had a Longbow to add to her arsenal.

So did JB but he had no creatures to put it on. Kate sent her 4/2 Myr into battle and JB fell to fifteen. He played a Copper Myr and Disciple of the Vault on his turn. Kate put all her eggs in the Myr Basket and shot the Copper Myr--taking one from Disciple.

JB untapped and killed the Myr with Essence Drain. Kate took two--one From the Disciple's ability and another from its beats. Kate drew a Mirror Golem off the top and removed the Scavenger from JB's yard. She moved the Scimitar onto to get to nudge it out of Bolt range. 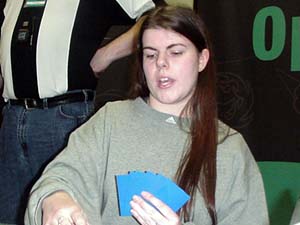 JB was out of gas and took six from the double equipped Golem. Kate looked embarrassed as she cast the Gemini Engine that she had just drawn. She equipped the Engine with a Bonesplitter and he took a boatload of damage on the following turn.

Kate was among the dwindling pool of undefeated players at 7-0 and looked to be in good shape to make Day Two. Patrick lost in short order to Krouner and was in jeopardy of having to cheer from the sidelines tomorrow with his second loss on the day.