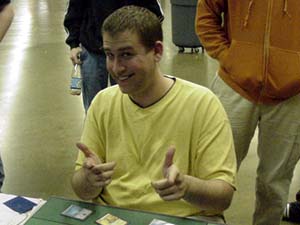 Sullivan is a member of TOGIT, one of the most prominent of today's teams, and has competed on several Pro Tours. Ken Krouner made top 8 at Worlds in 2001, and is known for his writings on StarCity Games as well as other sites. He is no longer on the PT gravy train, though, and made reference to this as he came over to the table.

"This could well be my last feature match of all time," he declared. Patrick replied with, "Me, too," and came around the table to give Ken a hug.

The two of them were obviously friends, and apparently something else they both knew about was the lack of quality in Patrick's deck. As they sat down again, Patrick saw Morgan Douglass standing nearby and called him over to take a look at how bad his deck is. Ken said, "I got to admit, when I heard the feature match - Ken Krouner versus Patrick Sullivan - whoo!" They spent the rest of the shuffling time reminiscing about their match at PT Venice, which according to them was the worst played match in history. "We averaged one play error per turn."

Ken won the die roll, although not before rolling the die right off the table, leading him to say, "What a buffoon." Ken led with an Island and an Arcbound Worker. Patrick had only the Island.

Patrick's third turn found him a Plains and a Neurok Spy, but Ken attacked with the fliers and added to his army with a Somber Hoverguard, also playing a Mountain. This gave Patrick pause, and he thought for a while before attacking Ken and playing a Vault of Whispers and a Pewter Golem.

Ken dropped a Welding Jar on his next turn and attacked with his flyers again, knocking Patrick to eight. Patrick again considered on his turn before attacking, and sent both of his creatures into the red zone. Ken chump-blocked the Pewter Golem with his Arcbound Worker, putting its counter onto the Arcbound Stinger, and took two. Patrick also had an Essence Drain ready for the Somber Hoverguard.

Ken attacked with his remaining flyers, dropping Patrick back down to seven, and played a Neurok Transmuter with one Island left up. When Patrick again attacked with both creatures, Ken blocked the Golem with the Transmuter, then used the Transmuter's ability to make it an artifact so that he could regenerate it with the Welding Jar. Patrick also regenerated his Golem and played a Soldier Replica, but his two available mana did not include any white mana - either a mistake or telegraphing a trick in hand. It didn't seem to matter much, as Ken Shattered the Replica and attacked Patrick down to one. Patrick got in one last, desultory attack before scooping.

One of the spectators called out, "Attaboy, Ken!" leaving Ken to say, "Apparently I'm the fan favorite." Patrick explained that most of his friends were still playing in the tournament. Patrick's fiancée, Kate, was actually playing right next to him in the feature match area, already at 6-0 and looking to improve.

Ken started going through his sideboard to see if he wanted to make any changes, and laughed when he saw that Patrick was not. "No sideboarding for Pat, all of his playables are already in there." Patrick thought for a moment, and then, "…yes."

Patrick decided to draw first. Ken seemed fine being on the play, again leading with Island and Arcbound Worker. Patrick again had only an Island, but Ken's turn two play this game was Iron Myr.

Patrick just played a Plains and passed the turn back. Ken played an Ancient Den and a Juggernaut, attacking for one with the Worker. Patrick had a Purge for the Juggernaut at end-of-turn, and then drew for his turn. He held his card out for a moment, leading Ken to ask, "Is it a good one?" It turned out to be an Island, and Patrick ended his turn with no other plays.

Ken's deck, by contrast, seemed to be firing on all cylinders. He had a Bonesplitter for the Worker, and after his attack played an Arcbound Stinger. Patrick again just played a land and sent the turn back. Ken attacked with his Arcbound creatures, dropping Patrick to eleven, and played a Neurok Prodigy and equipped it with the Bonesplitter. Patrick used a Regress to bounce the Prodigy at end-of-turn.

Patrick nearly gaped at his next draw. "Oh my god, an actual spell!" He tapped his mana for a Pewter Golem, saying "Time to fire back." Ken untapped and attacked with his Stinger for one, then replayed the Neurok Prodigy and also dropped a Somber Hoverguard into play. 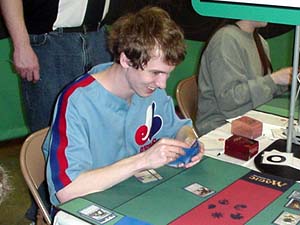 Patrick thought for a while on his turn. Ken tried to bolster his confidence. "You've gotten out of tougher situations than this." Patrick replied, "They all involved my opponent drawing extra cards or something." He finally tapped out to play a Quicksilver Behemoth, then debated attacking with his Pewter Golem before deciding to hold back.

"Pat, you're really not going to like this turn," Ken warned as he untapped. He played a Crystal Shard and used it to bounce the Quicksilver Behemoth, then attacked with his team, leaving Patrick at two life. Patrick made a show of it with a Soldier Replica, but Ken played out a Welding Jar and a Thoughtcast before attacking, and Patrick extended the hand before he finished tapping his attackers.