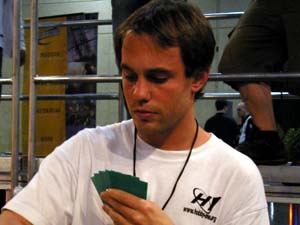 Ruel is one half of France's Fabulous Ruel Brothers, two Pro Players who have been ripping up the Tour since their humble beginnings as two-thirds of Team Black Ops. Antoine is currently doing the family name proudest, since he's undefeated after two drafts. The slacking Olivier slouched into Day 2 with a 4-2 record, and will have to put the jets on if he wants to catch his brother.

Right now Ruel faces Gerard Fabiano, armed with his ubiquitous hand-towel in a bid to reach 7-0. A Team TOGIT player of some distinction, Fabiano first grabbed the public eye when he, Scott McCord and Jon Sonne (together, Slay-Pillage-Gerard) finished fourth at Pro Tour Boston 2002.

Ruel got on the table first with Copper Myr, but Fabiano answered with a Tel-Jilad Chosen. Ruel didn't have a third land, and spent his turn making a Darksteel Ingot. Fabiano hit for two and dropped Krark-Clan Grunt. Electrostatic Bolt took care of the Chosen at end of turn.

Ruel untapped and played out a Darksteel Pendant, and then a criminally cheap Somber Hoverguard. Fabiano kept swinging and played out Clockwork Condor. Ruel got his third land after a Thoughtcast and played a Neurok Spy. Fabiano brought him to eleven attacking with both his men and played a mighty Ogre Leadfoot. Ruel even 'Oooh'ed to make him feel better.

He untapped and bashed for five. Neurok Prodigy joined his team. Fabiano hit with his Ogre, bringing Ruel to eight, and he played a Goblin Replica. With the help of Echoing Truth on the Condor, Ruel's unblockable squad evened the score. He counted his artifacts and played a Rust Elemental. Fabiano wasted no time targeting it with Shatter. He untapped and started thinking. The path he chose was to play the Condor and swing with all his creatures.

Unfortunately for him, Ruel had Shrapnel Blast in hand, and with enough flyers to get past the Condor, the first game was his.

Fabiano started the carnage in Game 2 with Goblin Replica. Ruel made a Neurok Spy, but Fabiano went one better with the mighty Juggernaut. Ruel had a Somber Hoverguard ready, though, and the two traded when Fabiano failed to have a trick. He had no follow-up, and passed back on five mana. Ruel hit for two and made a Spire Golem.

Fabiano Deconstructed and brought out a sizeable Tangle Spider. Ruel thought he was safe behind a Mirror Golem imprinted with Juggernaut, but Fabiano had Shatter and hit for more damage. That noise had to stop when Ruel came up with Stalking Stones. Fabiano wasn't about to trade his Golem for it with the help of Ruel's Myr.

For a few turns they both drew unhelpful cards. Fabiano made a Condor, but Ruel had Barbed Lightning. Vedalken Engineer for Ruel barely affected the board. Finally, Fabiano drew a breaker: Loxodon Warhammer. He suited up his Spider and got in there. Ruel lost his Engineer and Stones, and the life totals stood seventeen to four. An Echoing Ruin put away the Warhammer, but the damage had been done. Fabiano played Arcbound Worker, and the next turn checked life totals. He shrugged and spent his Electrostatic Bolt to axe Ruel's 1/1 and allow his worker to dock him a point.

Ruel's next draw? Spire Golem. Fabiano was not pleased.

Fortunately, his deck was forgiving. It served up Goblin Charbelcher that took one more point right away and given time would put things away. After all, Ruel was only at two. Ruel hit with his Golem and played a Somber Hoverguard. Another Belcher activation, and it sputtered. Ruel made a Cobalt Golem and dared dream he could win this one. Fabiano turned on the Belcher one more time. This time it hit two spells, and they were on to Game 3.

Fabiano had a first-turn Bonesplitter, but nothing to follow it, while Ruel busted out Silver Myr and Cobalt Golem. He played another Myr on his third turn and passed it back. Fabiano stopped him cold with Tel-Jilad Outrider. Ruel hit for two in the air, then tapped four and showed him a Rust Elemental.

Fabiano hit for three and played a Clockwork Condor which inherited the axe. Ruel crippled him with Echoing Ruin, busting through for eight, having fed Rusty an artifact land. Fabiano stood at just seven. He did some quick counting, then hit for another three and played a post-combat Vulshok Berserker and put the axe on it. 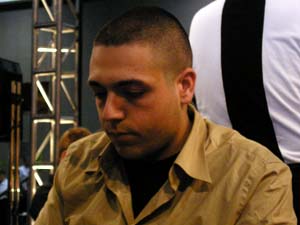 Ruel ate a Myr and hit for six, leaving Fabiano at one. He played a Darksteel Ingot and was done, in a seeming indomitable position. Fabiano untapped, attacked with his creatures and threw down an entwined Savage Beating! Before the spectators had time to calculate how much damage that was, Ruel calmly showed him Electrostatic Bolt.

Fabiano's face fell. After checking that Ruel had more than twelve life, he picked up his cards.