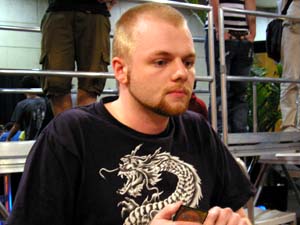 spending years on the competitive Magic circuit with an impressive number of top finishes, Nicolai Herzog finally won a Pro Tour last season, beating Osamu Fujita in the finals of Amsterdam. In fact, Herzog has been cleaning up in Limited Pro Tours, placing in the Top 24 of every one since Barcelona. With a 5-1 start so far, his consistency shows no signs of faltering. Jin Okamoto, "The Last Emperor", played in the Invitational a few days ago, and is also on his way to another strong finish thus far. Japanese Magic has been growing in strength with every passing event, and Okamoto, who came in second at Worlds last summer, is definitely a candidate to carry that trend even further.

At this point the game slowed down, as Herzog simply played Slagwurm Armor and ended his turn. Okamoto made an Arcbound Bruiser, and Herzog looked to break the stalemate with Nim Shrieker. It attacked on the following turn, and Okamoto cast Wail of the Nim with entwine to deal with the threat. Okamoto played Nim Shambler, and Herzog used Dismantle to kill the Bruiser. In response, Okamoto sacrificed it to the Shambler, which let him put the counters on a Pest token. He played Vulshok Battlegear on his turn, and Herzog had a Cobalt Golem that began to break the stalemate, attacking through the air for two damage. Okamoto played Leonin Bola and put it on his big Pest token, and used it to keep the Cobalt Golem tapped down.

Both players kept making tokens and neither could mount a successful attack, so both sides continue to grow and stare at each other. Herzog's Thunderstaff made his board a little better, and he eventually drew into Somber Hoverguard. This meant that the Bola would now be tapping down the 3/2 flier, allowing the Cobalt Golem to get through for two damage (he forgot to use Thunderstaff on the first attack). Okamoto summoned Reiver Demon to get a laugh out of Herzog- the only creatures that died were Okamoto's Atog, and Herzog's Hoverguard. Since this left Okamoto tapped out, Leonin Bola wouldn't be an option for Herzog's attack. He sent the Cobalt Golem in, and with the help of Thunderstaff, Pyrite Spellbomb and Electrostatic Bolt, the 6/6 flier headed for the graveyard. The game now went back to where it was before, with the Bola stopping Herzog's Cobalt Golem. Herzog played Talon of Pain, but it wasn't going to do much good without something that could get through for damage. Following turn after turn of "draw, go" on both sides, Okamoto put two Shrapnel Blasts on the table to finally end the game.

Herzog started with Arcbound Stinger, and Okamoto had a Bola. Okamoto's Silver Myr was Annuled, and with the help of Darksteel Citadel Herzog had a fourth turn Somber Hoverguard. Okamoto played an Elf Replica and gave it the Bola, and Herzog summoned Nim Shrieker. Krark-Clan Stoker gave Okamoto a second "Gray Ogre", and Herzog attacked through the air with his team. The Replica attacked back for two, was joined by a second, and the Bola went on the Shaman. On end step, it was killed with Electrostatic Bolt, and Herzog's flying attack brought Okamoto down to four. After seeing his next card, Okamoto conceded. 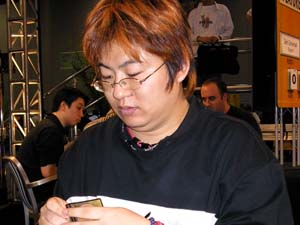 Okamoto once again started with a Bola, and Herzog had Pyrite Spellbomb. Herzog accelerated with a second turn Talisman, while Okamoto's Nuisance Engine was Annuled. Herzog played a second Talisman, followed by Somber Hoverguard. Okamoto summoned an Atog and gave it the Bola, and Herzog's Hoverguard attacked for three. Pewter Golem died to Shrapnel Blast as Okamoto sacrificed a Great Furnace, and Herzog put another creature in the air when he played Neurok Prodigy. Echoing Ruin destroyed the Bola to increase the clock, and even Okamoto's Arcbound Crusher died to Dismantle. Nim Shrieker made a bad situation far worse, giving Herzog the game and the match.