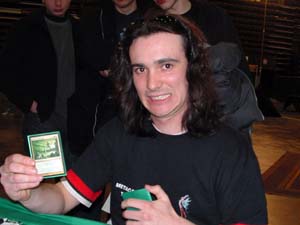 the beginning of the round, both players had 15 points. They knew that another loss would most likely eliminate them from the competition, and both played very deliberately. Canali got the early lead with an Selesnya Envangel, that allowed him to play out a Siege Wurm despite having only three lands. Cabral had a Snapping Drake, a Bramble Elemental and a Surveilling Sprite, but slouched a bit when Canali transmuted a Dimir House Guard to find his bomb, Glare of Subdual. Canali's tokens subdued Cabral's creatures, and the Wurm kept hitting him. When Pollenbright Wings hit the Wurm, Cabral conceded.

In Game 2, Cabral started with the classic turn one basic land, turn two Selesnya Sanctuary, discard. I bet every casual player has done this play at least once at a prerelease, however, Cabral actually didn't have any other lands, so for once it made sense. Both players spent a few turns with mana-artifacts, until Canali opened the game with a Screeching Griffin. Shortly thereafter, it was enchanted by Pollenbright Wings. It got to produce two tokens before Cabral used Leave No Trace, although I'm sure he would have liked to keep it for the Glare of Subdual. When it came a few turns later, Cabral was calm though. He had played an Ursapine and a Bramble Elemental, and still had a Sundering Vitae to deal with the Opposition. Canali kept fighting back for a while, creating hordes of tokens with Selesnya Evangel and Scatter the Seeds, but at the end he had to face defeat - the Ursapine proved too strong. 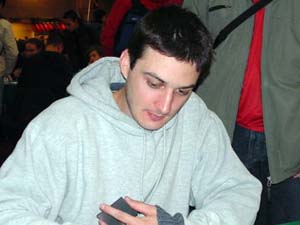 Game 3 started with less than thirteen minutes on the clock. Still both players took their time for every decision. Both played a few more or less insignificant creatures, until Canali drew his Dimir House Guard again and quickly transmuted it into a Glare of Subdual. As both players had the same number of creatures, and Canali's were a bit smaller than Cabral's, all creatures were just tapped each turn. When Cabral got Seed Spark, he was able to use the better quality of his creatures to slowly deal point after point of damage. But when time was called, he still needed to get rid of quite a bit of Canali's life points. Canali drew Recover, and used it to get back his Glare, almost ensuring the draw. A Faith's Fetters stopped the Glare though, and Cabral was able to force through enough damage on his last extra turn.