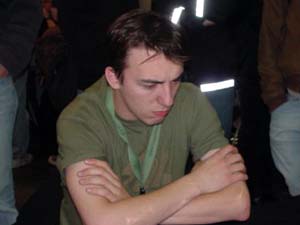 players need very little introduction and are cruising at perfect 6-0 records.
Olivier feels that he is heavily an underdog in this match since he thinks that he always loses to Tiago. Tiago on the other hand isn't quite that confidant in his changes as he also knows this is all part of Olivier act.

After winning the die roll Tiago decides that Olivier should start the match. There seems be a sort of trend in letting your opponent start the match. This is probably due to the fact that Ravnica features very powerful multicolour cards that make your manabase a bit more shaky.

While Olivier was away for a toilet brake I asked Tiago why he let his opponent start. He told me that he feels the only way his deck can lose is due to a manascrew. Also he thinks that tempo advantage is not that big in this format and there is always a chance of your opponent mulliganning.

Tiago is still the first to play a spell in Elves of Deep Shadow that is quickly followed by a Transluminant and a Mortipede from Olivier. Although he was off to a good start manawise, Tiago doesn't seem he can capitalize from it. His second play of the game is a Divebomber Griffin. Meanwhile Olivier develops his board with a Golgari Rotwurm, a Primordial Sage and a Grave Shell Scarab.

An impressive board position you would think but still Olivier feels he can't attack yet because he would lose his fattie boombooms to the Divebomber Griffin.

However his next draw step yields him a Faith's Fetters and without any fear of losing his guys to the Griffin he finally turns his men 90 degrees.

Without showing additional cards Tiago moves on to game 2

Although getting savaged the first game Tiago stays put about letting Olivier go first and is rewarded in the fact that Olivier has to mulligan to 5.

Although being screwed at 2 lands Olivier is very content with his topdecked Transluminant. After Tiago plays 2 Greater Mossdogs though and Olivier still fails to draw a Swamp he declares that the next game will be the game for his deck.

Olivier decides to return the favour in letting Tiago play first this final game… and it shouldn't be a surprise that Taigo has to ship his first 7 back this time. Olivier keeps but it's not the best hand he could have wished for: 5 lands, a civic Wayfinder and a Mortipede, a hand which he later admits he should have mulliganed.

On turn 4 Tiago plays his trademark Mossdog that gets answered by a Centaur Safeguard and a Mortipede from Olivier.

When Tiago comes out of his little think tank the only thing he can muster is returning a land to put a Selesnya Sanctuary in play. 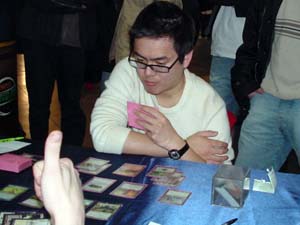 This is Tiego Chan's 'I own Olivier' face

Olivier is very fast putting a Faith's Fetters on Tiago's creature but that was exactly what Tiago was anticipating and Fiery Conclusion's finishes Olivier's Mortipede.

After this nice play Tiago unleashes an Ursapine and a Selesnya Guildmage and within 1 minute the game is totally turned upside down.

Although Olivier still has a Moldervine Cloak enchanting his Safeguard things start to look bad for him.

On the next 2 turns Tiago just makes some Saprolings thanks to a Scatter the Seeds and the Guildmage and with the help of a Flame Fusillade annihilates Olivier's board.