For this round's feature match, we invited the all female team of Kim Sara Morawa, Iris Schwarz and Steph Schwenke to our table who will now go up against Javier Dominguez, Jose Manuel Cabezas and Francisco Javier Camacho. This lead to the following pairings:

"Iris is the brains of this operation", Kim Sara Morawa admitted at the start of the match. "Without her, we wouldn't be here."

Let's find out whether that was an understatement and if the other girls did also bring something to the table. 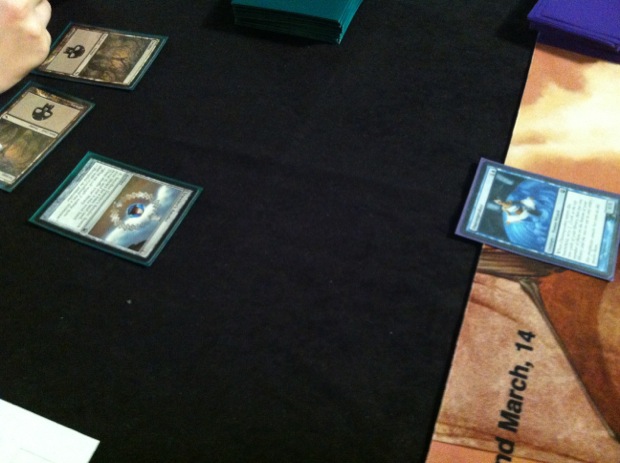 Morawa had a great start with Traveler's Amulet that helped her fix her mana base while Dominguez opted to choose a slightly more aggressive approach, inviting Omenspeaker to his party. 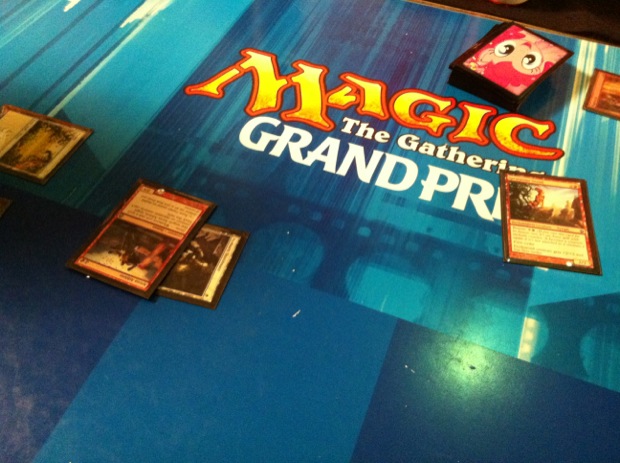 Schwenke went up against Francisco Javier Camacho on the third table and she was also off to a good start with Spearpoint Oread. Camacho was able to match her play with Nyxborn Shieldmate that got enchanted with Arena Athlete. The following turn, he added Nyxborn Rollicker and a Cavalry Pegasus, easily putting him ahead in the race. 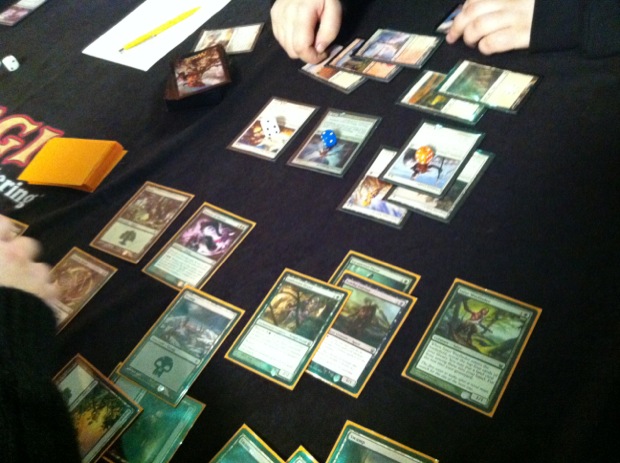 Schwarz, who was playing the Heroic deck in the ladies team, had a Phalanx Leader that already had 2 enchantments on it. She went for an attack with Oreskos Sun Guide and Akroan Skyguard and Glimpse the Sun God made sure Cabezas couldn't block the attacks, making it 1 - 0 for the ladies! 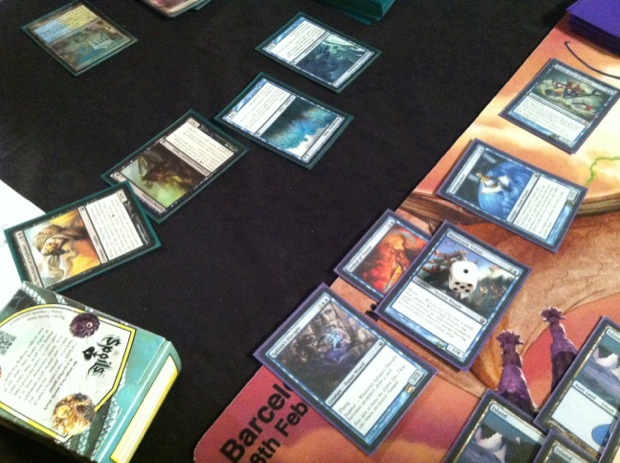 Back to table 1, where Morawa now sported a field of Deepwater Hypnotist, Mnemonic Wall, Baleful Eidolon and Gray Merchant of Asphodel. She was staring at Thasssa, God of the Sea, Omenspeaker, Wavecrash Triton and Sphinx's Disciple.

Sip of Hemlock targeting Wavecrash Triton made sure that Thassa, God of the Sea was no longer a creature, a crucial difference maker. Attacks followed and Dominguez blocked with Omenspeaker so he would only take 1, going down to 11. 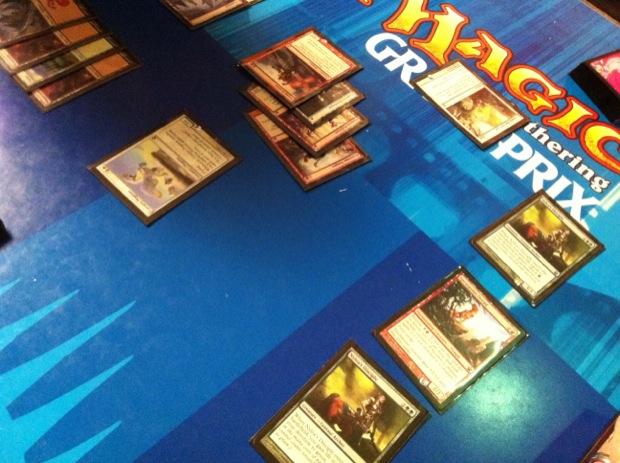 Schwenke went in with all of her creatures, she followed it up with Time to Feed and Camacho lost Cavalry Pegasus. He fought back with Portent of Betrayal, however, and that's when Schwenke knew it was time to shuffle up and go looking for some options in her sideboard.

This made the game between Kim Sara Morawa and Javier Dominguez all the more important. Both had been trading creatures the last few turns, leaving Morawa in a slightly better position, but a Stratus Walk on Deepwater Hypnotist provided Dominguez with a threat of his own. Morawa kept attacking with Gray Merchant of Asphodel and Baleful Eidolon, however, leaving her opponent on just 7 life. She also cast Archetype of Finality and he certainly deserved the name since Dominguez was quick to shuffle up after that.

Schwarz had Elspeth, Sun's Champion on the field and Cabezas tried to get rid of it, however, Schwarz was not running out of tokens anytime soon to protect her Planeswalker. Dominguez then simply went for a more extreme approach, throwing all of his cards on the table: 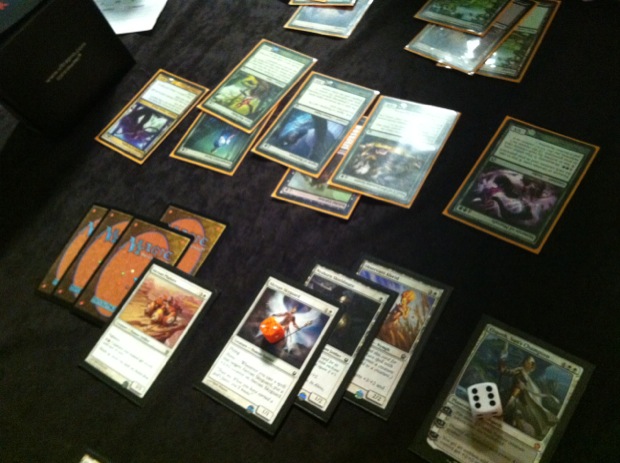 Schwarz simply continued to activate the Planeswalker's ability and when Cabezas didn't find an out on his following turn to fight back the Schwarz' forces that would soon grow wings, he extended the hand. 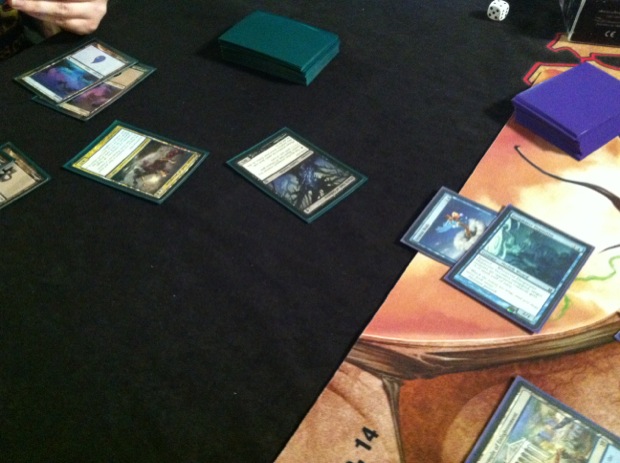 Morawa wasn't quite sure whether to make a particular play. Schwarz asked: "Did he see it already?", which Morawa declined. That was reason enough to cast Phenax, God of Deception, who seemed like a perfect way to wrap things up in no time!

The following turns, Dominguez tried to rush his opponent with Deepwater Hypnotist and a second copy that was enchanted with Stratus Walk. Morawa had an Archetype of Finality to fight back and she added Scholar of Athreos. She considered her blocks carefully, always making sure she could still send cards from the top of her opponent's deck to the graveyard.

Dominguez added Ephara, God of the Polis, but Schwarz kept a level head, counting counting the number of cards in her opponent's deck and telling Morawa that this game was over. "He's dead", she summed up the situation. Morawa then invited another creature to her party and when she announced that she would continue to tap her creatures for the effect of Phenax, God of Deception, Dominguez extended the hand. 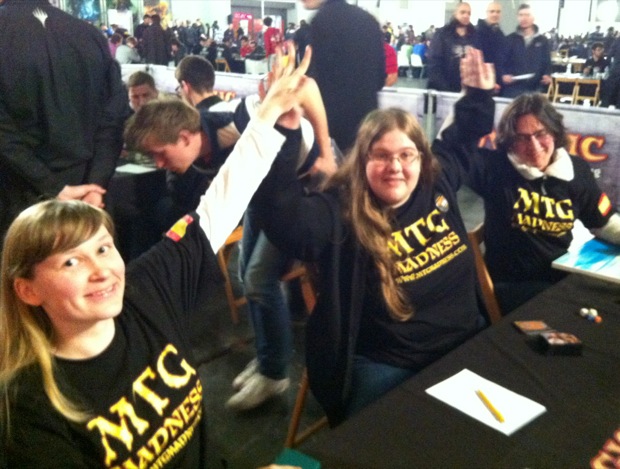 Francisco Javier Camacho and Steph Schwenke agreed that there was no reason dragging this out any longer, so they shook hands before they got together with their respective teammates again to prepare for the last 2 rounds in today's competition.