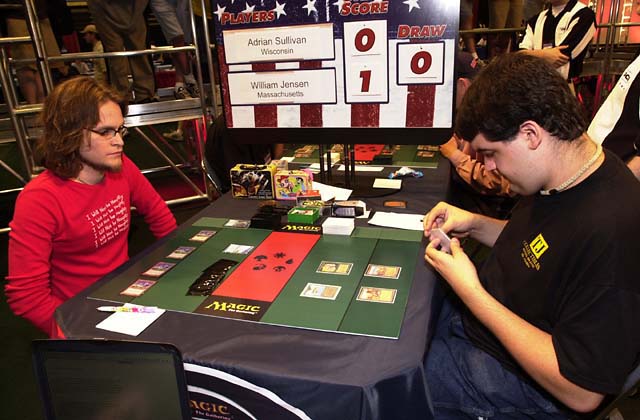 Adrian Sullivan is a player well known for playing rogue decks, and this tournament is no exception. Today he is running a monoblue deck with eighteen lands, and many cantrips. The deck also utilizes an impressive amount of time advantage thanks to Memory Lapse and Wash Out. Jensen is playing a metagamed green-red deck with tech such as Yavimaya Barbarian, which is a response to a field where monoblue decks such as German Prison are becoming increasingly popular

Jensen won the coin flip, and chose to play first. He played a City of Brass and an Elf, ending his turn. Sullivan simply played an Island. Jensen followed up with a Mountain, and Yavimaya Barbarian. In response, Sullivan played Opt, and Foiled the Barbarian, discarding Temporal Adept. Jensen then played another Llanowar Elf. During his main phase, Sullivan Opted again, and missed his second land drop. Jensen took full advantage of the situation, playing a Saproling Burst on turn three. A Port later meant that the game was locked up.

Sullivan got to play first this game. Yet again, Jensen started off with mana acceleration, playing City of Brass, Birds of Paradise. Sullivan responded with Opt. Jensen played another mana creature in Llanowar Elves, followed up by a Port, which tapped down one of Sullivan's Islands on his upkeep. The Llanowar Elf served on the following turn, and Jensen played another, which was Memory Lapsed. Jensen once again Ported down one of Sullivan's islands on upkeep. After some thought, Adrian tapped out for Glacial Wall.

Jensen drew the Elf that was Lapsed on the previous turn, and replayed it. Sullivan untapped, and played Sleight of Hand. Jensen drew and ended his turn, choosing not to Port Adrian on upkeep. Instead, Jensen played Blood Oath on Sullivan's end step, which was countered with Foil. With Adrian now tapped out, Jensen played Shivan Wurm, bouncing back an Elf which was immediately replayed.

However, Adrian had the answer on his next turn, as he Repulsed the Wurm. Jensen went into tiny beatdown mode, serving with two Elves, and one was blocked by Glacial Wall. During the end step, Sullivan tapped out to play Accumulated Knowledge, and Jensen then played Blood Oath, which was Foiled (discarding Misdirection). Jensen summoned Blastoderm on his next turn, and it resolved.

Adrian then played a key card in Tsabo's Web, which shut down both of Jensen's Ports. Blastoderm served on the next turn and was blocked by Glacial Wall, and Urza's Rage finished it off. Sullivan played Accumulated Knowledge for two on end step. During the main phase, Adrian played Wash Out on green, which slowed down Jensen dramatically, as his only lands were two unusable Ports and a City. Adrian took full advantage of the situation by playing Thieving Magpie, which was Raged away. In response, Sullivan Accumulated some more Knowledge for three.

Sullivan continued to improve his board position with Glacial Wall, and he Memory Lapsed Llanowar Elf on Jensen's turn. On the next turn, Jensen had replayed all his mana creatures, finally getting back to the same amount of mana he had prior to Wash Out. He then played Blastoderm, which resolved. On the next turn Llanowar Elf and 'Derm attacked, and the wall blocked the fatty. A second Blastoderm did not resolve. However, on the following turn, Shivan Wurm was summoned and hit play, only to be Repulsed. When it was cast on the following turn, Adrian countered it. A follow up Yavimaya Barbarian did manage to hit play. Sullivan then increased his defense further with Glacial Wall. Jensen played Thornscape Battlemage with both kickers, hoping to smash Sullivan's Web and gain back the use of his three Ports, but it was countered. The Barbarian served for two, and Sullivan once again played Wash Out on Green, countering the Barbarian when it was replayed. A second one played immediately after was Thwarted. On the next turn, Jensen replayed two Llanowar Elves, which was followed up on the next turn by two Birds. Saproling Burst resolved on the next turn, and a second one as well. Jensen was now at four, due to his City of Brass damaging him for most of the game. Wash Out on green bounced back all the Bursts and mana creatures, and Sullivan played a third Glacial Wall.

The four-mana creatures were replayed, and in response to the fourth, Sullivan Repulsed a Bird. Jensen replayed it, going down to two. On the end step, Sullivan played Accumulated Knowledge for four, followed up by Mahamoti Djinn on his following turn. Jensen untapped, and played two Bursts which resolved, and Sullivan Repulsed Jensen's Bird to clear the way for his Mahamoti.

Jensen played first, opening with forest and Birds of Paradise. On the following turn he played Yavimaya Barbarian, which resolved. However, he missed his second land drop. The Barbarian served, and a second Bird resolved. Sullivan played Opt on his end step, thought for a bit, and put the card on the bottom of his library. He then untapped, and played Sleight of Hand. The Barbarian continued to swing, and Jensen dropped a second Forest. On the following turn, Sullivan tapped out for Thieving Magpie. During the end step, Jensen played Blood Oath. Sullivan thought, commenting "I wish that card said 'Target player'". He finally decided to let it resolve, and took nine damage, revealing Repulse, Counterspell, Thwart, and three Islands. With Sullivan tapped out, Jensen played a Blastoderm on his turn, which resolved.

Thieving Magpie now attacked, and Sullivan drew a card, hoping to find an answer to the pressure on the table. He soon realized the game was over, and conceded.