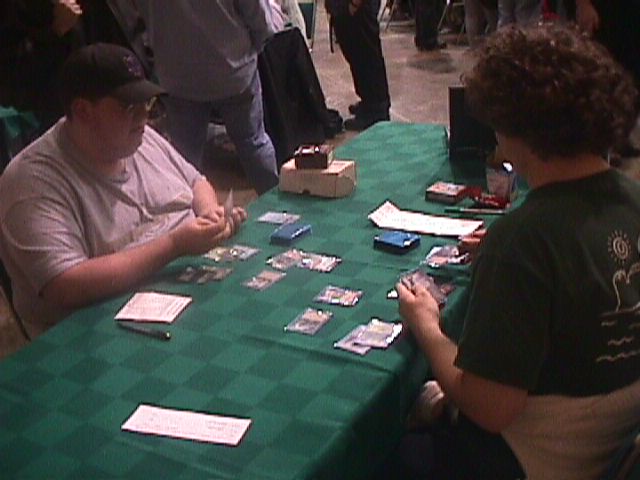 Eric Froehlich vs. Alan ComerWith most of the middle tables choosing to take the safe route into day 2 with intentional draws, we turn our attention to Table 1, where Alan Comer and Eric Froehlich will battle to enter the second day at 7-0.

Comer is PT fixture and has had success at all levels, with Top 8's at Pro Tours, Grand Prix, and a World Championships. Froehlich is a fresher face, but still a worthy opponent, as his Top 16 at PTLA and his Top 8 in the last team PT will attest to.

Comer had a Werebear, Crypt Creeper and Zombie Assassin in play before Froehlich did anything. But Froehlich's first play was a good one, an Elephant Ambush that Comer correctly predicted. The token killed Alan's Werebear, and then the two players traded Patriarch's Desires until the Crypt Creeper was the only man standing. 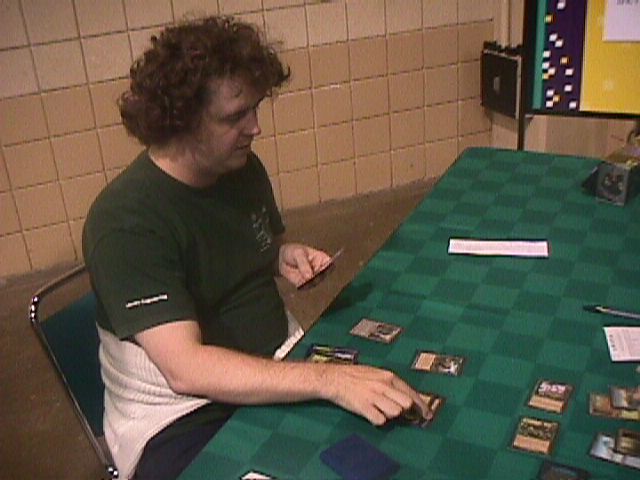 Alan ComerGreen monsters hit the table on both sides, but Comer's Rabid Elephant was the most impressive - it was keeping him ahead in the damage race until Eric put Seton's Desire on his Cartographer and used Deluge like a fog to put Comer into the low single digits. Comer used Innocent Blood to kill his own Elephant and Froehlich's Springing Tiger, and then traded a 4/4 Werebear for the enchanted Townsfolk.

Both players were then living off the tops of their decks, drawing and playing creatures and running them into one another. The life totals were 1 to 1 when Comer drew the trump: Roar of the Wurm. With seven mana in play, the two tokens were far more than Eric could handle, forcing him to comment, "You are VERY good at this game" as he scooped up his cards.

After a quick shuffle, game two was underway. Comer played out a turn-two Werebear, but was one-upped by Froehlich's Wild Mongrel. Both players cast turn-three Leaf Dancers, turning the game into a straight race.

The two players traded spells and creatures in combat, and the Leaf Dancers marched on, interrupted only when Comer tried to Seton's Desire his only to have it Aether Bursted. Froehlich's Mongrel kept him ahead in the life race, and when Comer tried to stabilize with a 6/6 Wurm token, Froehlich had Deluge to force the last 6 points through.

Alan decided that Eric should play first in the final game, prompting Eric to bring up the subject of an intentional draw. Comer would have nothing of it, and the game commenced. 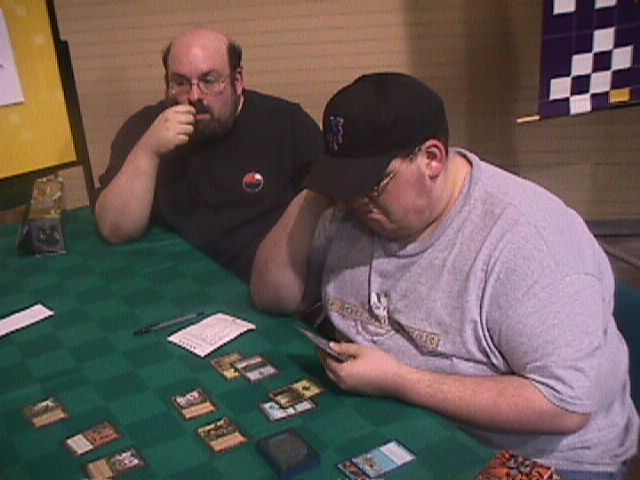 Eric FroehlichFroehlich was happy with his turn-2 Mongrel, but was less happy when a Peek revealed a Patriarch's Desire in Comer's hand - one of the few answers for the green dog in this format. But by the time Alan got around to casting the black enchantment, Froehlich had an Aether Burst handy to save his doggy.

Froehlich upped the ante with a Metamorphic Wurm that was threatening to go large at any time thanks to his Mongrel. But Comer had the Roar of the Wurm again (he actually has two in his deck). Froehlich attacked, expecting Comer to trade, but instead Alan Vivified one of his own forests and blocked with the land. Comer then swung with his 6/6, which Eric chump-blocked, and then flashed the Roar back.

It looked like Froehlich was on the ropes until he tapped seven mana and cast the devastating Upheaval, replayed a land, and cast his Mongrel.

Comer remained calm however, and took one hit from the dog before dropping a 4/4 Werebear. Froehlich attacked into it and discarded to make his dog bigger, but Comer played another bear. After a few more creatures and lots of trades, Eric looked to win when he recast the 7/7 Metamorphic Wurm. But Comer slyly commented that it didn't trample, and played a Squirrel Nest, eliciting gasps from the gathered crowd.

Froehlich added a couple more men to the table, but Comer played an unblockable Whispering Shade and then raised his Leaf Dancer from the grave with Morgue Theft. If his squirrels could hold down the ground, he'd win via landwalk.

With Comer at 7 life and Froehlich at 16, Eric peeled Aether Burst and used it to return Comer's Krosan Archer AND kill his lone squirrel. Eric's troops marched over and reduced Alan to 2, reducing Comer's affable mood to a more grim one in the process.

The nest did its job, keeping Alan alive. But Froehlich had a Cephalid Looter, and was racing through his library. Froehlich looted once more, and had to laugh when he had to discard, as "all of these cards win the game." He showed Comer the truth of that statement by Seton's Desiring his Springing Tiger, and walked the last points of damage past Comer's useless defense.

Eric Froehlich finished Day 1 at 7-0 and is the current leader in the standings.