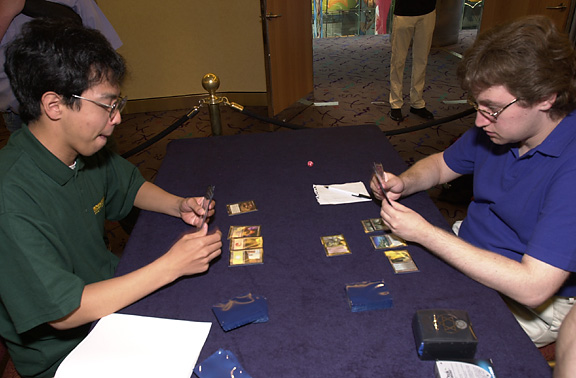 Yoshikazu Ishii looked a little inexperienced during the draft with Alex commenting that he felt many of the choices were in his favor. But with the multi-colored assortment of spells made available by Mark Rosewater (every non-mana provider was a gold or split card), mana screw would likely be the decider in many matches today. Alex played every color but green and Ishii played every color but blue and both players let their opponent go first so that they would have a greater chance of drawing the mana they needed.

Alex came out quickly (for this format) with a turn three Urborg Drake. Ishii played a Tigereye Cameo followed by a Raging Kavu followed by a Rock Basilisk. Alex was unable to draw a red mana source and had to use his Barrin's Spite to slow down Ishii's momentum. Ishii destroyed the Kavu and picked up the Basilisk. Ishii replayed the Basilisk and cloaked it in armadillo skin to give it +2/+2. Alex looked to be in real trouble but, like the foreign Grand Prix master he is, topdecked a Stalking Assassin that would save him at two life.

But Ishii has done well at foreign Grand Prix himself and had different ideas as he cast Meteor Swarm. Alex attempted to assassinate the Basilisk but before he could it suddenly Spontaneously Combusted and cleared the board. Alex knew that he was going to die in a Meteor Storm, but he forced Ishii to reveal two cards from his hand before he conceded with seven cards he couldn't cast in his hand.

Ishii brought out a turn two Meteor Storm and a turn three Raging Kavu to begin the second game. Alex answered with Unfulfilled Desires but apparently, all his desires were fulfilled, as he never activated its ability as he wanted to keep his life totals high due to the Meteor Storm.

Both players brought out a variety of creatures but Alex made the play of the game when he drew his sixth land and Plague Spored Ishii's Ranger En-Vec as well as his only source of red mana! Alex continued to draw and play creatures and eventually Ishii ran out of kill and conceded, revealing that in a reverse of the first game, now *he* had a bunch of red cards in his hand that he couldn't cast.

Alex cast the first two spells early as he played a turn two Angelic Shield and a turn three Urborg Drake. The Drake was conveniently not a white creature as Ishii played Shauku's Minion the next turn. Alex played an unblockable Forestwalking Slinking Serpent and then Absorbed Ishii's Segmented Wurm.

Ishii's motives behind his next play were difficult to ascertain. He played Armadillo Cloak on his Minion and in response Alex sacrificed Angelic Shield to unsummon the Minion. Ishii looked surprised and it appeared that he had missed the play, but in response he cast Spontaneous Combustion, sacrificing the Minion, and killed Alex's Drake and Serpent now that the Shield was gone. Ishii apparently had everything well in hand.

Alex was again screwed for red mana and looked like he was in serious trouble as Ishii played a Rock Basilisk and Kjeldoran Frost Beast. But Alex's deck pulled through and finally gave him a Mountain. With the Mountain, Alex was able to Plague Spore the Rock Basilisk as well as Ishii's only white source. Ishii tapped six lands and played Pavel Maliki - perhaps the first time in a serious tournament in six years that Pavel was actually cast. Using his Mountain again, Alex used Fire Covenant to clear the board and played Samite Archer and Smoldering Tar in the following turns.

Ishii drew and cast Cauldron Dance and spent a couple of minutes trying to determine which creature he wanted to bring back in to play with Alex at nine life. At this point Alex realized that Ishii believed Smoldering Tar could be activated as instant as he saw Ishii trying to figure out which creature could survive a Tarring. Ishii went with the Segmented Wurm, and Alex pretended to think about using the Tar, even though he knew he couldn't.

Ishii brought the Segmented Wurm back to his hand and recast it on the next turn. Alex looked like he was in desperate straits as he was at three life with no creatures while Ishii was at seven with a Segmented Wurm. But things were not as they appeared as Alex not only had Kaervek's Purge to deal with the Wurm, he also had Energy Bolt so if he could draw one more land he could just burn Ishii for the win.

Despite the cloudy skies, it's Alex's day in the sun as he draws the land for the win. Ishii resignedly showed his hand to reveal the 3/1 Raging Kavu (with haste) that he could have cast and won with if only he had realized Smoldering Tar could not be activated as an instant! Alex is having a very good day!