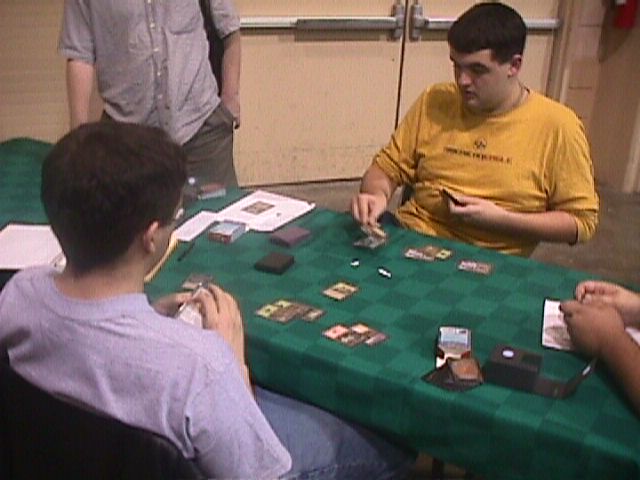 Andrew Johnson vs. William JensenWilliam "Baby Huey" Jensen and CMU's Andy Johnson sat down in round 7 with a lot on the line: the loser of this match would probably not make Day 2. But instead of taking the easy road and drawing, these two proud souls decided to put it all on the line. This match promised to be fast-paced with lots of banter and didn't disappoint.

In the first game, Huey played first, and had no plays on turn one or two with his B/G deck, while Johnson dropped a Werebear, and Huey answered with Krosan Avenger. Andy J cast a Thaumatog and it cost Johnson two land, when Huey swung in and Refreshed his Avenger. 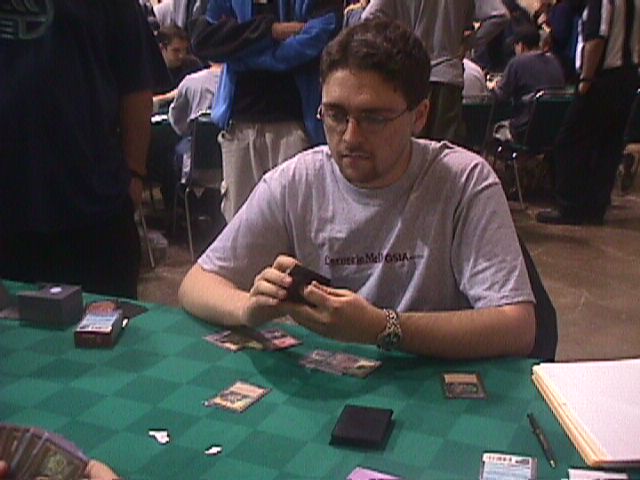 Andrew JohnsonSeveral turns later, Huey threatened some offense with the flying Dusk Imp, but Andy J was ready with a Kirtar's Desire. The following turn Huey continued to try and swing the game his way by Afflicting Johnson's Halberdier, but Johnson's Cephalid Broker had a nice surprise waiting. In addition to adding two cards to his graveyard giving him threshold, Johnson also found his win condition in Mystic Enforcer.

Huey put up a valiant fight, knocking Andy J into the single digits, and had Johnson on his heels, but Mystic Enforcer proved too much to handle, and Huey scooped up his cards. At the end of the game, Johnson had only four lands in play, and each of them were a different basic type, so who knows what could come out of his deck in game two. 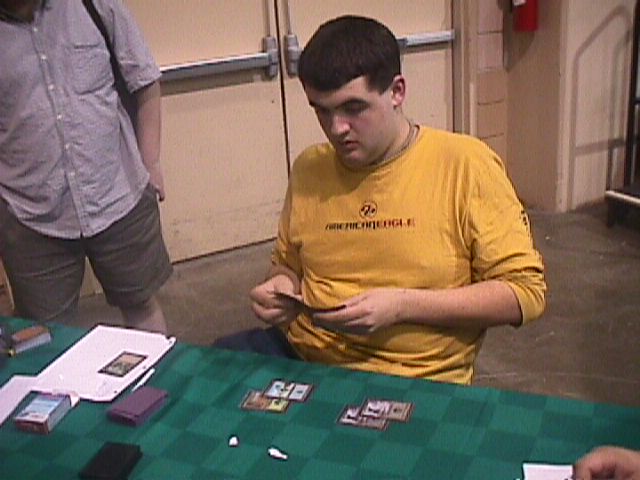 William JensenBaby Huey's Call of the Herd token went swinging into Johnson's Rabid Elephant on turn five when Johnson was tapped out, but Huey left one Call token back. "What could I have?" Huey asked Andy J, and Johnson had to know. After having his Call token blocked, Huey Refreshed the token; used his remaining two mana to enchant the other token with Psionic Gift; and finished off the Rabid Elephant.

A few turns later the game took a turn. No longer a lively, fast-paced contest; the match slowed with Andrew Johnson playing Squirrel Nest, and Huey playing Braids. After drawing no threats, Huey eventually had to sacrifice his Braids. "I don't think game is going to end well for you," commented Johnson. Huey agreed, and just a turn later, conceded the match.

Huey, as predicted, did not make day 2.