By now, Shouta Yasooka should be a familiar name. I mentioned him earlier when I broke down the Players Championsip standings. I talked about how, despite the enormity of his resume, the Japanese community feels as though he remains both underrated and relatively unknown outside of Japan. I hope for the sake of anyone that sits across from him at a table that this is no longer the case. Especially Tomek Pedrakowski, his Round 7 opponent. 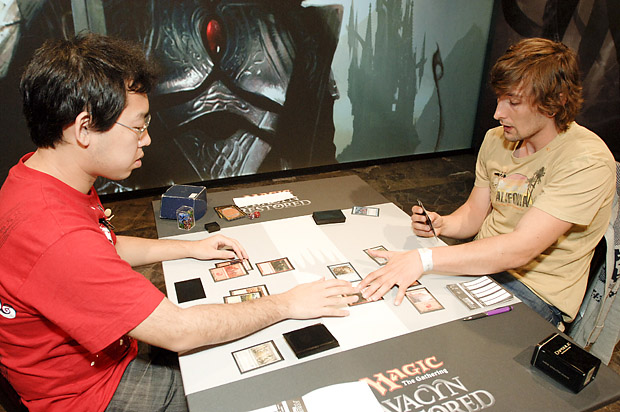 Tomek Predakowski and Shouta Yasooka are both players you do not want to underestimate.

Pedrakowski is a former Polish National team member with Top 16 and Top 32 finishes at Worlds. Qualifying for this event by virtue of his Level 3 Pro Club standing, and he has played enough high level Magic to know not to sell anyone short, especially the Japanese player sitting across from him that looks strangely familiar for some reason...

Yasooka started with a mulligan to six...and followed it up with two more mulligans, eventually starting on only four cards. Pedrakowski managed to stick on six cards, avoiding a trip any lower. Yasooka's opening grip of three lands and a Scroll of Avacyn turned into a third-turn Fervent Cathar that soon picked up a Call to Serve. 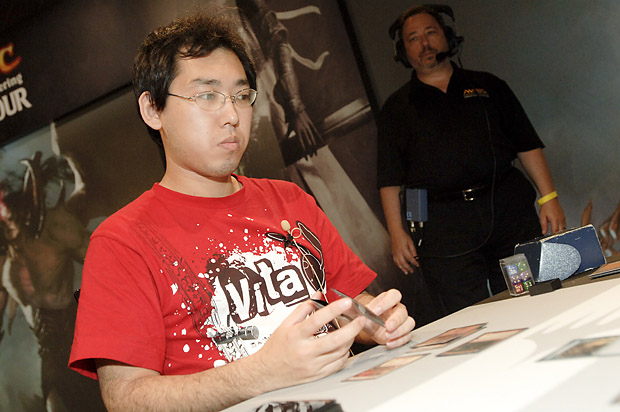 Yasooka struggles to recover from his mulligan to four.

Pedrakowski, on the other side, started with a blazing Wingcrafter into Fervent Cathar. He even had a Mist Raven to remove Yasooka's flying Cathar, grounding it. When Pedrakowski added a fourth creature to his side on the following turn, Yasooka folded in the face of the three fliers he was facing, content to try again, this time with more cards.

While that was undoubtedly a game that Yasooka would love to have back, one of the things that makes Magic great is the touch of randomness inherent in it. Unfortunately for Yasooka, a whole lot of randomness seemed to happen all at once for him.

Fortunately, his opening draw in the second game was far more palatable, opening once more with a Scroll of Avacyn, followed by a Thraben Valiant. Pedrakowski had a Kruin Striker for his turn, and it immediately traded with the Valiant. Yasooka popped his Scroll of Avacyn and replaced it with another. Cycling through his deck at a rapid click, Yasooka found his way to a Riders of Gavony, coming down naming Humans. Pedrakowski made a Somberwald Vigilante on his turn, but a lack of a second Island left him without a play. He passed the turn back, allowing Yasooka to add a Spectral Gateguards to his team, choosing not to pair them up with the Riders to avoid a redundant double vigilance. 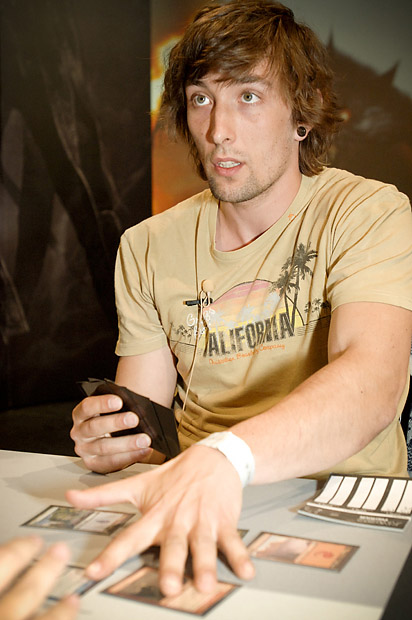 Pedrakowski's deck can come out of the gates swinging, despite talk that the format was slow.

Pedrakowski was in serious trouble. He was forced to make a Lightning Mauler and pass the turn back to Yasooka. Yasooka took advantage of Pedrakowski's troubles to attack him down to 5. Yasooka added a Farbog Explorer to his team and passed the turn. Pedrakowski made a Gang of Devils and passed the turn back to defend. When Yasooka attacked in with his team, Pedrakowski tossed his men in front of what he could, but Yasooka used a Zealous Strike to pump up his unblocked Explorer, dropping Pedrakowski to 1. On the following turn, Yasooka finished him off.

Both players once again kept their opening hands. Pedrakowski started first with a Kruin Striker, powering it up with a Latch Seeker before attacking into Yasooka on the following turn. The Japanese player had a Thraben Valiant that could block, but he chose not to, electing to save it to team up with his Hanweir Lancer on the following turn. Pedrakowski was undeterred, pushing the Lancer back to Yasooka's hand with a Mist Raven, allowing him to attack Yasooka down to 11. Yasooka simply replayed the Lancer and passed the turn after an attack for 2.

Pedrakowski found a stroke of incredible luck in an Elgaud Shieldmate to give his unblockable Latch Seeker hexproof. The powerful combination looked poised to end this game before Yasooka could even really get started. Combined with the Mist Raven that Yasooka couldn't block either, Pedrakowski was attacking for five unblockable damage each turn. Yasooka made a Goldnight Commander, but it was likely to be too little too late, even with a ridiculous Thatcher Revolt turn. Pedrakowski attacked him down to 1. Yasooka untapped and surveyed the board. After some brief phantom-abacus math, Yasooka conceded the final game of the match after an absurdly good draw from Pedrakowski.