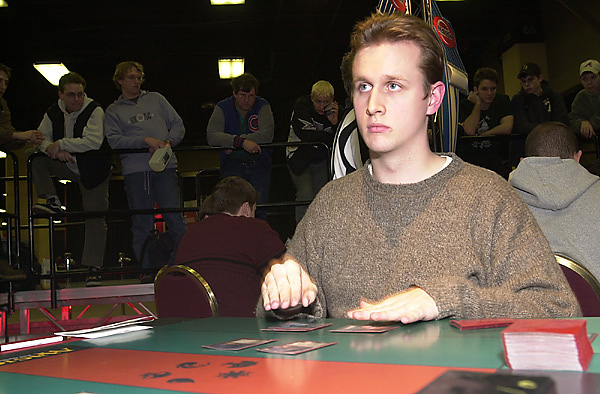 One of the bars to the legitimacy of professional Magic as a "sport" is the randomness inherent in the game. This bias is weakened every time exceptional players do well with consistency. Thus it warms the heart of each of Magic's proponents to see former Pro Tour champions Bob Maher Jr. and Sigurd Eskeland sitting pretty at 4-1-1, all but guaranteed to make Day 2.

Eskeland mulliganed game one and busted out a Ramosian Sergeant. Maher Ported his land on turn two, and then played back-to-back Chimeric Idols turns three and four. He swung for three, and Eskeland searched out a Defiant Falcon.

Maher had stalled at three land. He entered his combat phase, floated UU and activated his Chimeric Idols. Eskeland tapped three land to search with his Sergeant and immediately grimaced, not liking his play. He got a second Falcon and let the Idols through. The Withdraw Maher had telegraphed sent the Sergeant back to Eskeland's hand. Eskeland did not recast it, and passed back to Maher.

Maher played the same gambit again, attacking with UU floating. This time Eskeland searched with a Falcon, bringing out a Defiant Vanguard to block one of the Idols. Again Maher Withdrew, this time saving the blocked Idol and returning a Falcon to Eskeland's hand.

Eskeland Ported Maher on his next upkeep, stranding the bounced Idol. Maher attacked with the remaining Idol, which met another Vanguard. Now it seemed that Maher was stuck. With Eskeland keeping him at two mana, he couldn't bring any great threat to the table, managing only a Spiketail Hatchling and an Ankh of Mishra. Eskeland, on the other hand, was having a field day, building a brutal army that eventually crushed Maher.

Eskeland had to mulligan again in game two, making a Sergeant and Falcon while Maher cast Spiketail Hatchling and Chimeric Idol. Eskeland couldn't find a third land, and had to pass back to Maher, who cast a second Idol and stopped Eskeland's Power Sink by sacrificing his Hatchling. 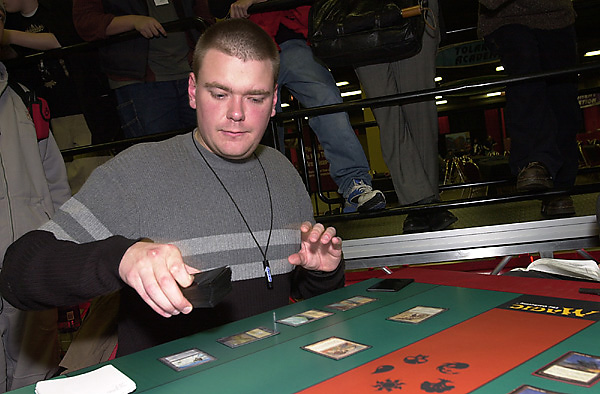 Eskeland Disenchanted one of the Idols on his next turn. Maher played Ankh of Mishra, taking advantage of Eskeland's mana troubles, and attacked again with his Idol. Eskeland found his third land to cast Lin-Sivvi, but Maher had found his fourth and cast Wash Out, naming white, his Idol storming the empty battlefield.

Eskeland went to one playing his fourth land, hoping Parallax Wave would buy him some time, but Maher had a second Wash Out for the win.

Game three saw Eskeland's third mulligan of the match, but his face was a mask of resolve. He played a turn-two Falcon, and Disenchanted Maher's Overburden. Maher made an Airship and attacked, allowing Eskeland to trade-up his Falcon for a Lin-Sivvi. Maher tapped out for Parallax Tide, removing all of Eskeland's lands and limiting Lin-Sivvi's effectiveness. Next turn he completed the "combo" with Ankh of Mishra, as well as casting Troublesome Spirit.

The Tide faded away and Eskeland took eight, his first damage of the game. Maher attacked with the Spirit and Eskeland searched out a Falcon to chump. Maher meanwhile doubled his on-board Spirit-investment.

A couple of turns passed, and Eskeland's side was filling up with quality rebels, threatening to break through Maher's two Spirits. He played his fifth land, dropping to ten, and Maher was ready with the Parallax Tide. Eskeland had no answer and conceded in the face of lethal damage.