The two players with perfect records from the draft day faced off in the first round of the standard constructed to see who could keep their perfect record intact. Both players were packing similar decks, Seck with Nether-Go and Kwan with Eye-Go. 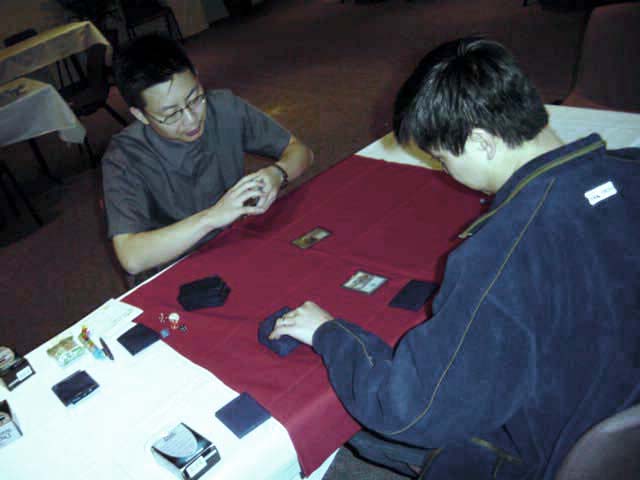 Kwan opened up with a Tsabo's Web on turn 2 but still managed to miss his third turn land drop. Seck went all the way to his fourth land drop before making a play, a hard cast Nether Spirit. Kwan attempted to erect some defense in the form of 2 Walls of Air, but Seck easily dealt with them via a pair of Vendettas.

Over the next few turns Kwan used all sorts of tricks to try and keep the Nether Spirit at bay, including multiple Washouts and Recoil. This wasn't enough to stop the Spirit however, as Seck recast it turn after turn. Seck next attempted to remove another threat from Kwan, using a Tsabo's Decree naming Evil Eye of Orms-by-Gore. The Decree revealed no Evil Eyes but did give Seck the chance to see what Kwan had in his hand.

Kwan looked for answers for the Spirit with multiple Accumulated Knowledge's, while Seck also attempted to fill his hand with a Fact or Fiction. The Fact or Fiction never resolved however, but did open a door for Seck to get Accumulated Knowledge for 5 through. This proved the difference as Seck had multiple Undermines and Spite/Malices available to defend his Spirit and finish off Kwan. 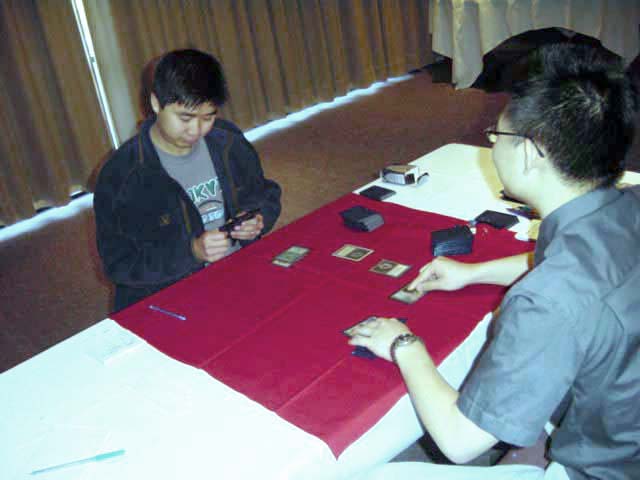 Kwan began game 2 with a Mulligan but settled on his second hand. By turn 3 both players had one of their key sideboard cards in play, a Millstone. Kwan played his stone a turn earlier then Seck so started out the favorite in the Millstone race. Both players agreed that life totals were not be a crucial part of the game. The next turns featured a Rootwater Thief hitting the table for Kwan and then immediately going to the graveyard thanks to a Spite/Malice from Seck.

Kwan used his next turn to play an Evil Eye, which became the target of an end-step Recoil. The Recoil triggered a counter war, including 2 Undermines, a Misdirection and a Counterspell. The Recoil resolved, giving Seck a chance to stop it returning to play. By this point both players had been heavily Milling each other, with Seck's deck looking a little thinner than Kwan's.

Kwan attempted to speed away to victory when he played his second Millstone, which safely resolved. It looked as if life total might become important to the end-game when a Nether Spirit was milled away and then brought into play for Seck, but Kwan had an answer in the form of Evil Eye. The second Millstone didn't last long for Kwan thanks to an unanswered Recoil. The game then went back to "Mill - Draw - Go", with Seck's deck still looking a lot thinner then Kwan's. Seck decided that he wouldn't win this race and scooped. 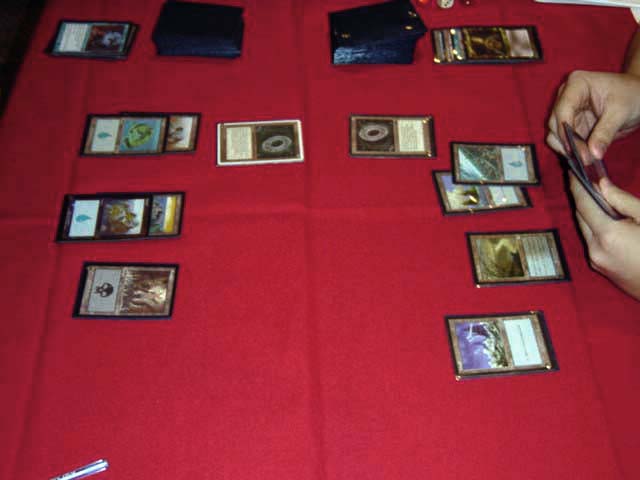 Kwan had mana problems again, missing his second land drop even after a first turn Opt. By turn 5 however, Seck had missed his land drop and both players were even in the mana development category. The first play by Kwan, a Rootwater Thief, sparked a counterspell war which Kwan lost, but opened a path for him to safely cast a Millstone. Seck responded with a Lobotomy, removing all but the Millstone in play from the game. The Millstone wasn't a threat for long as Seck quickly bounced it back to Kwan's hand with Recoil.

A second Lobotomy took out another threat from Kwan's deck, his Evil Eyes. This left only a Rootwater Thief as a victory tool for Kwan. With several Accumulated Knowledge and Fact or Fiction, Seck managed to get a Nether Spirit in play. This Spirit did a lot of unanswered damage before Kwan attempted to erect a Wall of Air as defense. The wall never made it in play however, and only did more damage to Kwan thanks to 2 Undermines. This brought Kwan down to 1 life, and the Nether Spirit finished him.