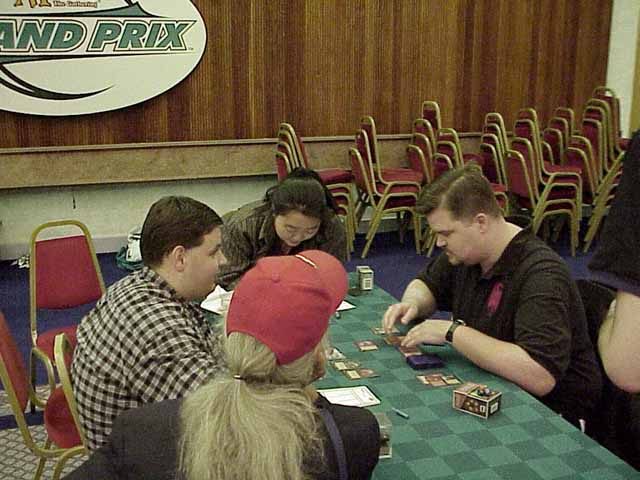 Before the last round of the Sealed Deck portion of Grand Prix Manchester, both Darwin Kastle and Steve OMS were undefeated. Darwin had a very strong red, black and blue deck while Steve had a pretty good green and black deck with a touch of blue and white.

Darwin won the die roll and opted to go first. Unfortunately, he stalled on two lands for one turn and then he stalled on three lands for another two turns. Meanwhile, Steve speeded up his mana by playing Fertile Ground on one of his Forests, and a turn three Slinking Serpent hit the table. Steve then went on to play a Stormscape Apprentice, a Nightscape Apprentice and then a Nomadic Elf on his turn four.

Darwin had been ready to Zap Steve to draw another card so that maybe he would draw a land, but instead he chose to Zap the Stormscape Apprentice. He failed to draw a land though, and had to play a Duskwalker without paying the kicker cost. Steve continued attacking with his creatures, and he also summoned a kicked-up Faerie Squadron that joined the crew.

At this point Darwin still hadn't drawn his fourth land, and slapping his library didn't help. So he chose to Assault the Nomadic Elf to slow down the attack. But Steve had more creatures, he cast a Phyrexian Slayer and then another Nomadic Elf. Darwin finally drew into his fourth land, and he cast Agonizing Demise on the Faerie Squadron. Steve chose to bounce it back to the top of his library using his Nightscape Apprentice, but he still got Darwin down to seven life.

Darwin really needed a land to cast the Void he was holding in his hand, but again he failed to draw a land. He played a Trench Wurm that kept the Slinking Serpent from attacking, but the Slayer took him down to five before the Faerie Squadron was back. When he drew a land the following turn, he knew it was too late to do anything, and he conceded.

The second game started much better for Darwin. Again, he cast an early Zap, but this time to kill Steve's turn two Quirion Elves. Steve had a Nomadic Elf as well, but Darwin cast a Slinking Serpent and started hitting.

Steve Harrowed to get some more lands, and then he dropped a Stormscape Apprentice. The two players attacked each other for a few turns, then Darwin killed the Elf and Steve's one plains with a Plague Spores. Steve got access to white mana by casting a Fertile Ground on one of his forests, but the Serpent kept hitting him every turn. Soon it was followed by an Urborg Shambler that Steve had to tap down, taking one mana burn every turn in addition to the damage from the Serpent.

Steve tried to play a Kavu Climber, but Darwin had an Exclude and was happy to use it. Darwin then cast a Duskwalker with kicker while Steve dropped a Phyrexian Reaper to stall off Darwin's assault. But Assault was exactly what Darwin did - he Assaulted the Reaper. Steve tried to Explosive Growth it, but Darwin had a Repulse and just returned it, sending his critters over to take Steve to nine. Steve recast the Reaper, but when a Vicious Kavu came into play on the other side of the table, he scooped.

The last game was rather fast. Darwin played first and again, he Zapped Steve's turn two Quirion Elves. He then followed up by playing a Trench Wurm and then he Assaulted Steve's newly cast Phyrexian Slayer before starting to attack. Steve again tried to play Kavu Climber, but Darwin didn't want him to draw a card and Excluded it.

Darwin then played a Shivan Zombie, followed by an Exotic Curse that killed Steve's Treefolk Healer. He then searched his library with a Worldly Councel and attacked with his Zombie and his Wurm. Steve blocked the Wurm with his Firescreamer and pumped it to trade creatures, but Darwin had another creature; he dropped a Slinking Serpent. Steve drew, played a swamp, Darwin untapped, attacked to bring Steve down to three - and Steve conceded.