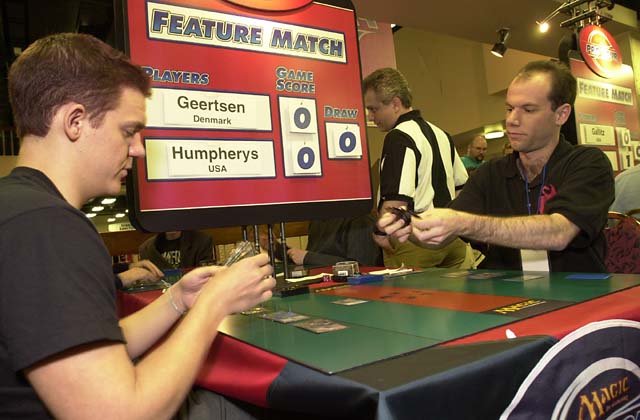 It was close to midnight by the time Round 7 started, and fatigue was hanging heavy in the Queen Mary exhibition hall as the players resigned themselves to the feature match area. Fortunately, both David Humpherys and Svend Geertsen are PT veterans well versed in the art of Magic Marathons. Geertsen, the young man from Denmark considered to be one of the most strikingly handsome figures on Tour, is absolutely on fire today. He went into round 7 wielding a classic blue/black tempo deck with an unusually devastating amount of card advantage. Geertsen had a perfect 6-0 record at the start of this round, and was looking to advance to Day 2 undefeated. Dave Humpherys was only slightly behind him at 5-1, and hoped for the match win to be in prime striking position for the Top 8. The Hump, a quiet, brainy Your Move Games player from Boston, drafted a blue/black/white deck that wasn't quite as fast as Geertsen's, but had some powerful high end spells that could spell victory if the game went long.

The Hump won the die roll and chose to draw. Most players choose to play first in Invasion limited, a format where tempo reigns supreme. Dave's decision to draw reflects his signature controlling play style and his hope to draw into his late game powerhouses. Unfortunately for the Bostonian, Geertsen punished him for his slow start by coming out with quick creatures and brutal card advantage. Geertsen cast a Dream Thrush and an Urborg Drake, and Humpherys, unable to mount a defense, was forced to Recoil the Drake twice just to relieve the pressure. Geertsen retailed with discard of his own, casting Probe with kicker in both of the next two turns. As if double Probe weren't enough, Geertsen used The Hump's next end step to cast Fact or Fiction, and chose a pile with Repulse and two land over a Ravenous Rat and Urborg Phantom. By the end of that three turn exchange, The Scandinavian's hand was stuffed full of cards compared to the American's one. Hump's one card turned out to be Zanam Djinn, which had to hold off Geertsen's growing army. After being Repulsed and cast again, Hump's Djinn was involved in a critical and complex sequence of plays. There were two blue permanents in play: Hump's Zanam Djinn and Geertsen's Faerie Squadron. Geertsen also controlled two black creatures, a Hate Weaver and a Nightscape Apprentice. Geertsen attacked with his 3/3 Faerie Squadron, sending it into the 3/4 Djinn. He used his Hate Weaver to pump up the Fairies to a 4/3, put damage on the stack, and then used his Nightscape Apprentice to put the Fairies back on top of his library. Both Hump and Geertsen expected the Djinn to go to the graveyard, although some of Humpherys' teammates, who were watching, started excitedly screaming "It's a 5/6! It's a 5/6! " Neither player had realized that when Geertsen put the Faerie Squadron back on top of his library, the Djinn would then be the only blue permanent in play, making it a 5/6 again. However, this small moral victory was not enough to swing the game for Humpherys. Geertsen recast the Faerie Squadron, and soon was able to execute a similar play sequence to kill the Djinn, making a flagrant gesture to Hump's teammates in the audience as he did. Humpherys was soon overwhelmed by Geertsen's army and scooped. 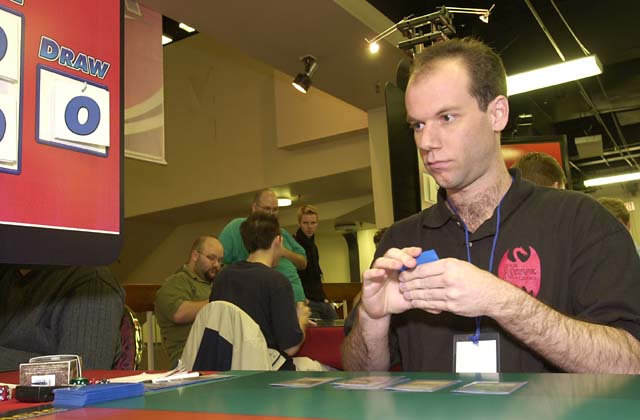 Having seen how fast Geertsen's deck started in game 1, Hump chose to play first in game 2. He came out slow nonetheless, getting his first creatures on turn 5 with an Ordered Migration for 3. Geertsen had another fast start with a Phyrexian Battleflies, Hate Weaver, and Ravenous Rats. If Geertsen had been able to cast the remainder of the spells in his hand, he would have very likely been able to overwhelm Humpherys, but he never got the chance. Geertsen stalled at 4 land while Humpherys emphatically slammed his 6th land onto the table and cast Hypnotic Cloud with kicker. Geertsen was forced to discard Shoreline Raider, Repulse, and Probe, leaving him empty handed. Hump steadily took control of the game from then on, drawing cards with a Benalish Herald and amassing a collection of fatties. There was one moment where Geertsen looked like he might be in the game, when he peeled an Annihilate off the top to destroy the Heralds, but it wasn't enough. Humpherys swept in for the kill with 14 minutes left in the round for game 3.

Geertsen came out with yet another great tempo draw in game three, leading with a Nightscape Apprentice and the third appearance of his Hate Weaver. Realizing that he had very little time to secure victory, he chose to play a Faerie Squadron without kicker on turn 3, hoping he could use the Hate Weaver to pump up the 1/1 Fairies for extra beats. Hate Weaver is a remarkable effective damage source, and Humpherys was at 6 life before he stabilized with a Trench Wurm and Benalish Heralds. Time was called on the turn that Geertsen made his final attack of the game, reducing The Hump to 1. On turn 2 of extra time, Geertsen untapped and calmly Soul Burned Humpherys out of the match. 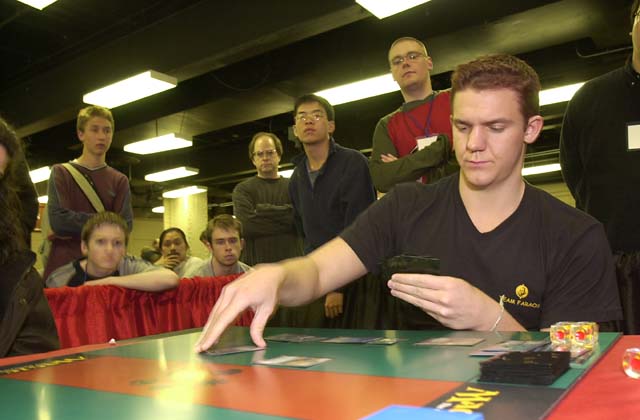 Geertsen advanced to day two at 7-0, the number one seeded player in the swiss, while Humpherys went into day 2 very much alive in 23rd place. If both continue on their current hot streaks, it is very conceivable that The Hump will have the opportunity to avenge himself in a rematch tomorrow.