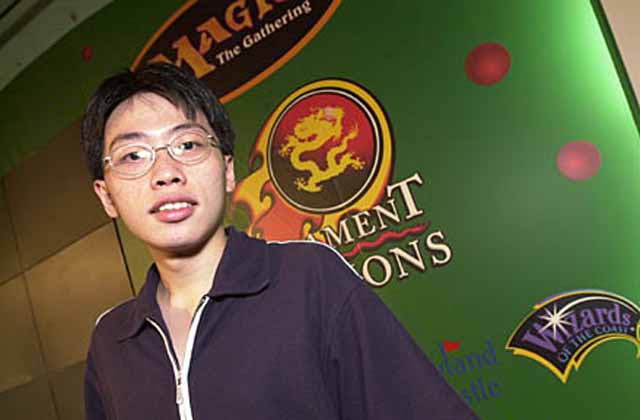 Hon Ming Au Yeung has a reputation as an incredible drafter. This is evidenced by his consistently strong finishes in the draft portion of Worlds. He matches up this round against the exciting Doctor Wong, who made Top 8 at last year's APAC Championships. The winner of this match will advance to Day Two. The loser will have to be content with offering congratulations.

Doctor Wong had a perfect mana draw, but was light on threats. His Phyrexian Slayer was Shackled. His Caldera Kavu traded with one of the Serpentine persuasion. Au Yeung hit his sixth mana and started to drop houses. First there was Sulam Djinn, then a slim-by-comparison Wayfaring Giant. It was a mere 3/5 owing to an absence of Islands for Au Yeung.

The Doctor used bounce to push through damage. He sent both behemoths back with a kicked Rushing River. When one of them reappeared, he Repulsed it. He knocked Au Yeung to 8. When the Djinn came down a third time, joined by an Amphibious Kavu, Doctor Wong looked like he was out of answers. More monsters appeared on the other side of the table, and he conceded.

Au Yeung didn't even need the Repulse and Silver Drake he'd been unable to cast.

Game two began similarly. Doctor Wong had early pressure in the form of Nightscape Apprentice, Sparring Golem and Slingshot Goblin. Au Yeung slowed the bleeding with Shackles and Samite Pilgrim. Neither player developed for a few turns, then both exploded onto the scene with Sea Snidd.

Au Yeung made a Rampant Elephant. His next play of Wayfaring Giant was met with a kicked Agonizing Demise. He needed more creatures to break through The Doctor's defenses. He got them.

Over the next two turns he made a kicked Pincer Spider and a Stone Kavu. He attacked with his best monsters. A kicked Rushing River bought Doctor Wong a couple of turns. Au Yeung was stuck on one Forest. He compensated by playing the game's first flier: Silver Drake. It hit twice before Doctor Wong found a Repulse to slow it. He had been busy summoning Hooded and Caldera Kavu, and hoped to sneak in lethal damage. He had a few chump blockers for Au Yeung's bigger creatures.

Unfortunately, Au Yeung seemed to have a never-ending supply of them. Each attack left The Doctor with a smaller army, while Au Yeung stayed strong. Wong was forced to Recoil to save himself damage, and that's never a good sign. He had removal for two more creatures. The remainder did him in.