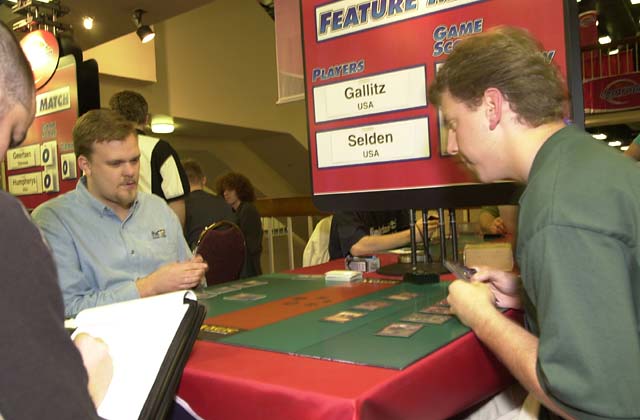 In the seventh round to the first day, veteran Rochester specialist Don Gallitz (who hates it when we call him that; but there you go, he is) and 1998 World Champion Brian Seldon faced off to see who could fall asleep first. 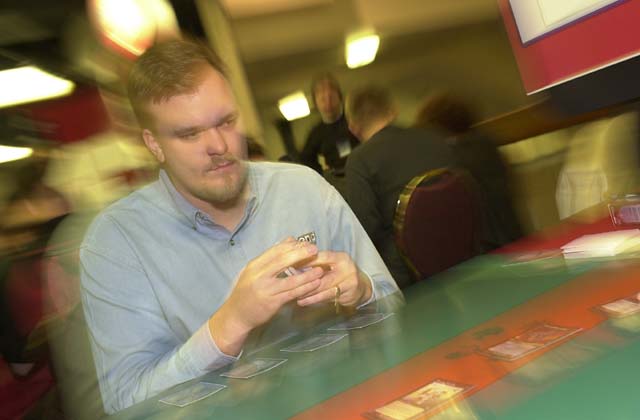 Going first, Don kept a one-Island hand with some good cards in it. Unfortunately for him, the wrong end of the risk calculation came up to bite him, and he went six turns before finding the plains he needed to cast a Galina's Knight with 11 life left. In the face of a Phyrexian Battleflies, Shivan Zombie, Sparring Golem, and Kavu Aggressor, he conceded the following turn, showing three more Galina's Knights in hand.

Again going first, this time Don had a nice distribution of land early, which he used to repair some early damage with Reviving Vapors (for a Shackles), and to cast a kicked Ardent Solider. This Soldier got very hopeful upon being given a pair of Wings, and accompanied a Rainbow Crow to get Brian down to 13 life by turn seven.

Brian had good early creatures but had to Recover the Zombie from an early combat trick (Stand/Deliver). Phyrexian Battleflies and Hooded Kavu completed his early forces. Mana short until the seventh turn, Brian finally drew his second Swamp and Annihilated the Soldier. From there, a Ravenous Rats (to get a Forest), a Scorching Lava on the Crow, and an Ancient Kavu to give additional heft to his assault put Don back on the defensive. Answers such as Samite Archer, Angelic Shield, and Shackles came in a trickle, easy prey for Zap and overwhelming forces. By turn eleven, it was over. 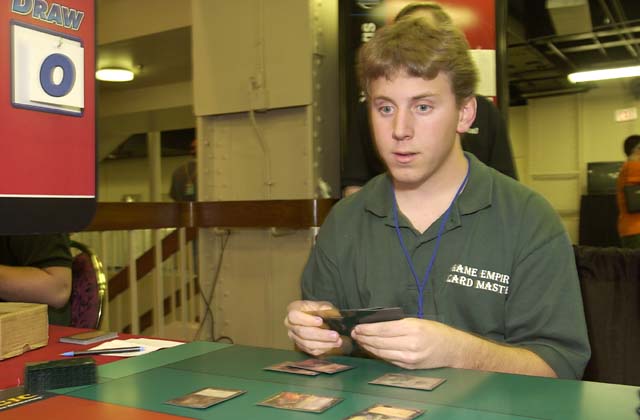 Mr. Gallitz gave a very thoughtful (and completely unnecessary) apology to the author regarding the lack of real contest during the match. The author was, of course, simply grateful to get out of the bowels of the boat before 1 a.m.