Round 7 Feature Match: Ebb and Flow (and a Little Bashing too)

Lebedowicz has been absent from recent Grand Prix because he's taking some time off of the game and focusing on one of his favorite things in life: dating. The acquisition of a new ladyfriend meant he did not make the trip to Grand Prix-St. Louis last weekend, but a promise to close friend Phil Napoli that he would attend U.S. Nats finds Osyp here in Atlanta, and in his natural habitat - the feature match area.

Sitting across from Osyp is one William Moreno, Constructed deckbuilding star. Due to his easy-going nature and occasional hobo-ish appearance, it's easy to give Billy beats, but that doesn't change the fact that he's a good man, an excellent deck designer and one of the better Americans on the Tour lately. 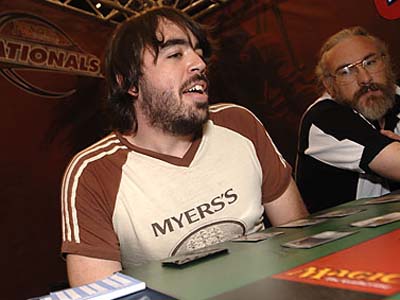 Billy Moreno was in fine form on Friday.

"I'm not sure you want to feature this match," said Osyp. By the grimace on his face, Osyp appeared to be telling me Billy was probably going to win this match, but with Osyp you never know. The action started fast and furious, with Moreno casting Coiling Oracle and Farseek, while Osyp led off with a turn-three Beacon Hawk and Compulsive Research.

"My deck is unreal good," admitted Moreno, as he shipped two men into the red zone who clearly looked like they would lose in combat to Osyp's untapped Helium Squirter and Beacon Hawk. Lebedowicz smelled a trap and chose not to block, running into Moreno's other trap - a bloodthirsty Ghor-Clan Savage.

Three Dreams from Osyp netted him Plumes of Peace, Faith's Fetters and Galvanic Arc, a huge swing in the game and one that might be able overcome Moreno's deck power. That thought was a brief one, however, when Moreno got disgusting the next turn, attacking Osyp to 9, casting Govern the Guildless to steal Osyp's Helium Squirter, and then grafting a token from the Squirter onto a new Elves of the Deep Shadow. This gave him five creatures to Osyp's one.

Osyp used Faith's Fetters to lock down the Savage, bringing him back up to 13. Galvanic Arc on his Hawk killed the stolen Squirter, but Moreno just had too much gas and killed Osyp a turn later with a hellbent Cackling Flames. 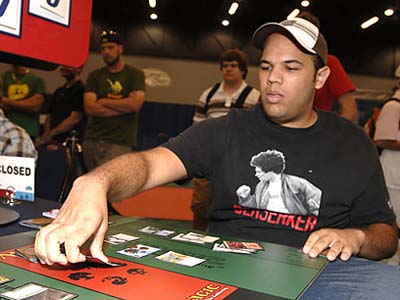 Osyp battled back, but Moreno's deck was fearsome.

This affair was the opposite of Game 1. Where the first game in this battle was all action, nothing happened in the second game until Moreno cast a turn-four Centaur Safeguard. The Centaur and a new Elves of the Deep Shadow from Moreno provided a modicum of beatdown while Osyp used Three Dreams to exhume Plumes of Peace and Galvanic Arc from his deck.

Transguild Courier gave Osyp a blocker, but the multicolor golem went right back to his hand courtesy of Moreno's Ogre Savant. Osyp replayed the Courier only to see Moreno cast a Civic Wayfinder on his turn and then Indrik Stomphowler, who dropped the people's elbow on the Courier, knocking him out for good. The beast also dropped an elbow on Osyp's chance of winning the game.

It's not that Osyp let it get him down, or didn't battle back - he did, and fiercely. In fact, two turns after Billy smashed the Courier, Moreno was down to just his Elves as attackers, courtesy of Carom, Galvanic Arc, and Faith's Fetters. Billy just shrugged, cast Ulasht the Hate Seed, Trygon Predator, and Sundering Vitae on Osyp's Fetters, demolishing all his hard work. Moreno's deck was just absurd, generating card advantage with almost every single play.

"I can't beat your deck ever," admitted Osyp.