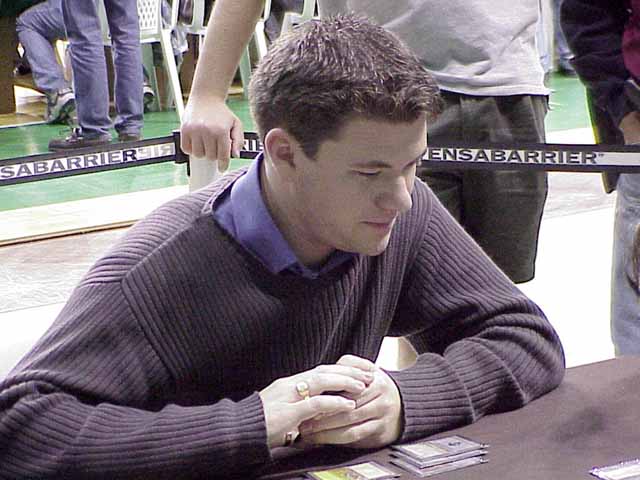 This was a great match to watch as both players were joking around and being light hearted about the whole thing. I guess they were both glad to have already secured a position in day two. Mr. Fear, of course, was spouting absolute rubbish in his own amusing fashion, but Karlsson just smiled and managed to play through it.

Ed wins the toss and elects to play. The beats begin early as his successive drops from, turn two were Spiketail Hatchling, Horned Troll, Giant Caterpillar, Windscouter, Ghar then Bouncer. Amusingly the Hatchling proved to be the most trouble for his opponent though as he stalled on four land. A Cateran Brute and Persuader are allowed to enter play though (Ed had the option of sacrificing his flyer in both instances) and the Windscouter got Arrested for loitering.

The first real mistake of the match came on turn seven when Fear finally sacrificed his Hatchling to an Enslaved Horror attempting to resolve - just so he could tap the Swede's last mana and bring the Spiketail back into play. The Giant Caterpillar could have been sacrificed instead to form a 1/1 Butterfly token, and the 3/3 could have come back into play. (i.e. Ed could have had 1 more creature as a result.) As it turns out, this oversight proves to be useful when he manages to counter a Ramosian Rally in his turn through saccing the Hatchling for the second time. The life totals at this stage are Ed: 18, Morgan: 8.

The Yank starts to get a bit hot under the collar when a Bog Elemental and an Oracles Attendants hit play, but a timely Airship with Bouncer backup sees the end of the game with no air opposition and a Withdraw to stall the ground beats. 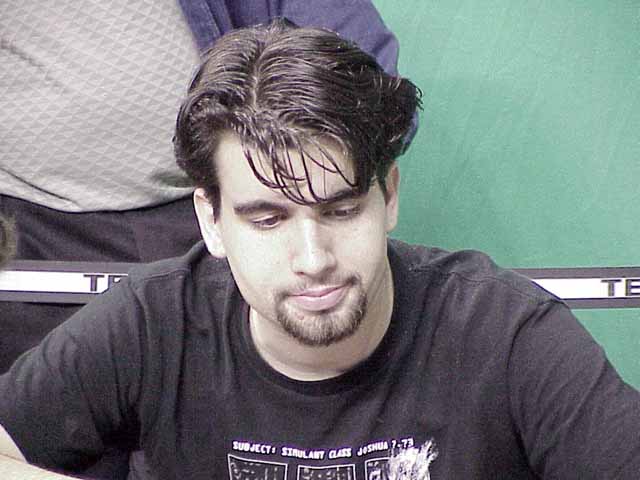 This time Morgan elects to play first and makes a turn 3 Chilling Apparition. Ed has drawn 3 consecutive land though, and can only make a Wandering Eye to block the Spectre. The only other permanent in play at this stage is a Seal of Removal and Fear is amused to see that his opponent has a Topple, 2 Gliders and a Sever Soul, whilst he has a Stinging Barrier and some land (the eye reveals all). Karlsson Topples the Eye and forces the American to discard a land. The Barrier then hits and is immediately Sever Souled but the Seal of Removal sends it back, but the Apparition serves again and another land is placed in the bin. The Barrier is recast, then the Swede makes the first of his two gliders confidently - Ed notices the confidence with which it is played and assumes (correctly) that Morgan has Mageta's Boon, so he starts Pinging to the dome instead - the Boon is placed on the Glider in response. The Glider gets to attack just once before a Windscouter hits the table and stabilises the game. It looks like there will be a stand off until Ed draws a Coastal Piracy and starts to serve with the 3/3 flyer (forgetting that it returns to his hand at the end of combat - but hey - he was excited).

Meanwhile the ground is starting to get ugly for Fear as a Bog Elemental and Silkenfist Order parade around the shop with an Oracles Attendants snooping around. However the American wins with exceptional playskill at the end. He manages to tap his opponent out, kill the Aparition with the barrier and then time an Alexi's Cloak very intelligently when the Oracles Attendants attempted to target the Thermal Glider with a Boon on it. The Glider subsequently could not survive and both 3/3 flyers die. When Ed then produces a Waterfront Bouncer the Swede concedes on 12 life knowing that his Bog Elemental (which was gradually eating his mana reserves) could not hold off the onslaught it was about to face.