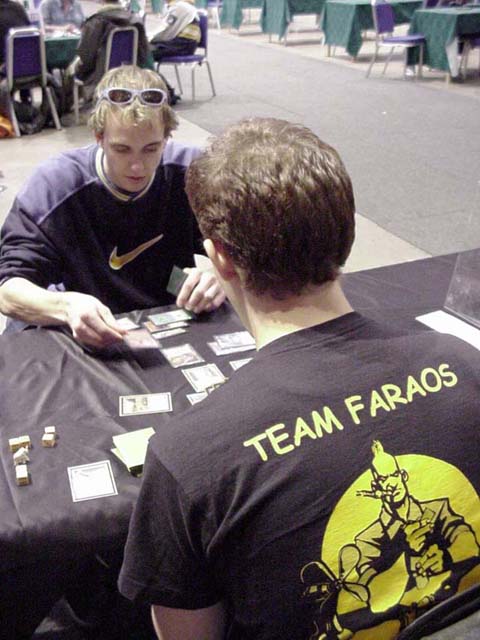 In the final round of the first day of 2001 Grand Prix Gothenburg, a Norwegian and a Dane faced each other to fight for a perfect 7-0 record. Norwegian bad boy Eivind Nitter had put together a "traditional" red, black and blue deck, while Geertsen was with the green, white and blue with a little splash of red.

Geertsen went first, and he had an opening hand consisting of a lot of lands - a plains, two islands, a mountain and a forest - along with an Aurora Griffin and a Vodalian Serpent. His first spell was a fourth turn Aurora Griffin. Meanwhile, Nitter had played a Shivan Zombie ("You're dead." "Yeah, I guess.") and then a Thornscape Familiar that all of a sudden got really Sinister and black and big, and Geertsen found himself at twelve. Nitter also played a Kavu Scout.

Already feeling the pressure, Geertsen then played a Pincer Spider without the kicker. He then put the Griffin in front of the Kavu Scout during the following attack. But Nitter kept playing creatures, he bust out a Thunderscape Battlemage with the black kicker and got Geertsen to discard an island and a plains.

Finally, Geertsen got a huge creature into play, he cast a Vodalian Serpent with kicker. The Serpent stopped Nitter's attack, but the Norwegian had a Nightscape Familiar and he also cast a Phyrexian Infiltrator that kind of scared the Dane. Geertsen slapped an Armadillo Cloak on the Serpent, and then it suddenly became a huge threat. So when the Serpent came over for a visit, he chose to triple-block it to kill it.

Nitter still had the Infiltrator and the Familiar in play, and he continued attacking. Then, he bust out his own Vodalian Serpent with kicker, and soon, Geertsen was low on life again. The Dane played a Faerie Squadron with kicker to try and stall for at turn, but Nitter top decked Rushing River and took the game.

"You're so lucky," Svend said after Nitter's topdecking. "You're so bad," the Norwegian replied, smiling though. The two players took a good while shuffling and sideboarding, and then Geertsen chose to have Nitter play first in the second game. 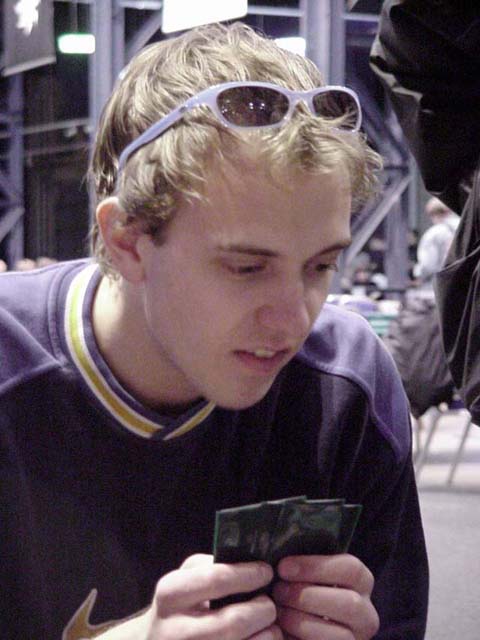 Svend had had a quick start, but he stalled on three lands and cast a Vodalian Serpent without kicker to get a creature in play. Nitter got to five lands, then he started stalling on land, which again meant that he couldn't play his Vodalian Serpent with kicker. Instead, he got out a Nightscape Familiar, but it was Repulsed by Geertsen. Nitter then played a Trench Wurm to put some pressure on the Dane.

Finally, Geertsen got some more mana. He cast Harrow, and then he played an Amphibious Kavu that Nitter strongly disliked. The Norwegian disliked it so much that he used a Raging River to send it back to Svend's hand, so that he could get some more damage through.

Geertsen played his Hunting Drake and returned the Hooded Kavu to the top of Nitter's library. Then he doubleblocked the Trench Wurm, putting the Drake and the Vodalian Serpent in front of it, but Nitter Terminated the Drake and both creatures died. So Geertsen couldn't do anything but re-cast the Amphibious Kavu, and Nitter re-cast his Hooded Kavu. Geertsen had a Treva's Charm ready for it when it attacked though - but then Nitter finally played his Vodalian Serpent with kicker.

Slightly annoyed when seeing the huge creature on the other side of the table, Geertsen drew a forest and played a Benalish Trapper and a Faerie Squadron with kicker. But Nitter was on a roll. He cast Probe with kicker, drawing a Rushing River - and Geertsen had to discard his hand that held an Armadillo Cloak. Nitter then used the Rushing River to return Amphibious Kavu and the Faerie Squadron to Geertsen's hand, and then he attacked to bring the Dane down to five measly life. 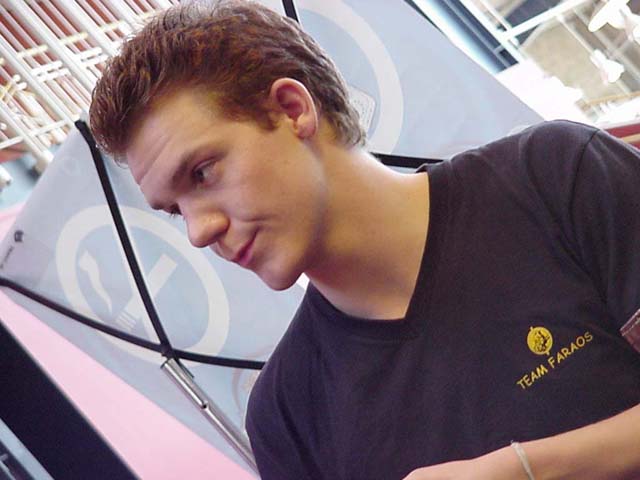 Nitter wasn't the only one who could top deck though. Geertsen drew, and then he played Teferi's Moat, calling blue. Unfortunately, Nitter had plenty of black creatures. He attacked with his Nightscape Familiar and the Trench Wurm, and then he cast a Phyrexian Bloodstock. Geertsen had to get blockers in play, so he cast his Amphibious Kavu and the Faerie Squadron without kicker. He also had a Hobble for the Phyrexian Bloodstock, and the two players had a few rounds trying to draw something.

The Norwegian knocked his deck and drew - and he then slapped a Sinister Strength on his Vodalian Serpent while the audience let out a little "oooh". Suddenly, the Serpent was black, neutralizing the Moat, and after chump-blocking for a turn, Geertsen scooped.