"We did not expect to be here, sitting atop the standings," said a cheerful David Tuite of Ireland as he sat down for his middle match against Chile's Roberto Castillo. "I mean, we started the day with a bye."

Chile surely understood how they felt. Other than their captain, Rookie of the Year Felipe Tapia Becerra, none of the players on the Chilean national team have any Pro Tour experience. But as we've learned here over the past two years of the World Magic Cup, experience isn't everything. Sitting at 5-1, Chile's only loss had come at the hands of a Mexican team whose only loss in the tournament thus far was Chile's Irish opponents. 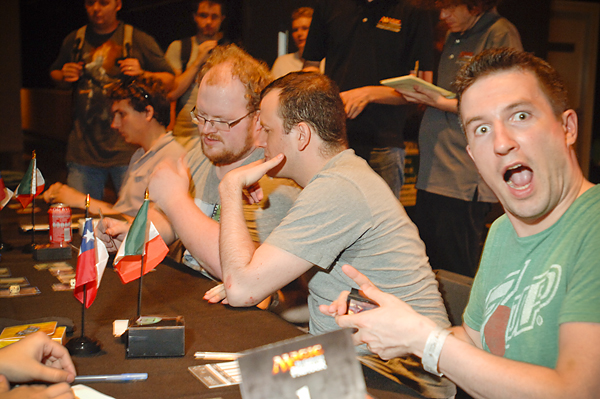 Ireland has been full of surprises all day, as they seek to head into the second day at the top of the mountain.

Just as their appearance at the Top table was a surprise to them, these matches were absolutely littered with surprises for both teams. Between Falkenrath Aristocrat, Craterhoof Behemoth, and Golgari Charm, the player in control in these matches often switched in an instant, and it made for some compelling Magic.

In the A seat, Ireland's captain Sean FitzGerald's Jund Midrange deck took on Rodrigo Lopez's UWR Flash deck. An archetypical matchup of Standard, this matchup is one of the more evenly matched matchups Standard has to offer. Unfortunately, things began on a very imbalanced note. FitzGerald's steady rock did exactly what it was supposed to do, utterly dominating the mana screwed Lopez. Lopez's draw held a number of good cards, but no number of draw steps or cycled Azorius Charms were able to give him a third land, instead simply paving the way to a quick beginning to Game 2.

The second game was much more interesting. Though he stopped an attempt at an early Rakdos's Return, Lopez soon found himself on the receiving end of an even more devastating spell: Slaughter Games. There was nothing Lopez could do but watch helplessly as FitzGerald thumbed through his deck and relieved him of his copies of Sphinx's Revelation, a powerhouse in this format. Yet despite losing his trump card, Lopez looked calm and collected. What was his secret? The Assemble the Legion that he had resolved on the previous turn. With the powerful enchantment on the table, there were only three cards in FitzGerald's list that could remove it, and Lopez started to quickly take over the game. FitzGerald tried to keep going with Huntmaster of the Fells, but it was no match for the ever-increasing swarm of tokens. Three became six became eight (two got blocked by the Huntmaster and his Wolf), and it didn't take much past that for Lopez to take the second game cleanly. 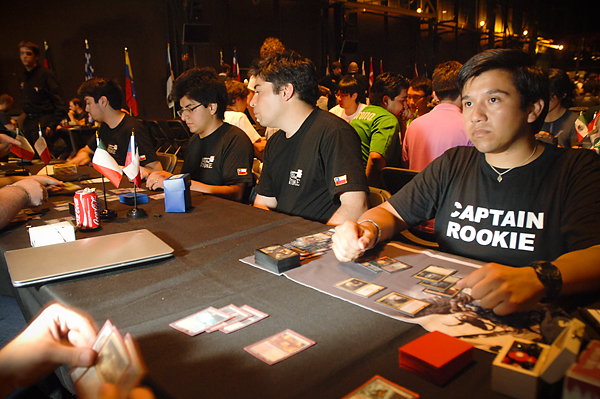 Chile is another team that has impressed all day, with their decks packing some solid plays and a few surprises.

The final game featured the first of the surprises in this match, and it came at a crucial time. FitzGerald had a very good draw to begin the final game of this first match, powering himself into the midgame ahead of schedule with a second-turn Farseek. This allowed him to fill up his side with creatures before Lopez could get his own defenses set up. With enough offense set up, FitzGerald decided to sit back and just smash face. Lopez had what appeared to be the perfect answer, with Supreme Verdict backed up by an Azorius Charm in hand to deal with the resulting Thragtusk Beast token. On his own fifth turn, after having taken a big hit from FitzGerald's team, Lopez blew up the world.

Or he tried to. A sideboarded Golgari Charm quickly hit the stack, regenerating all of FitzGerald's creatures, keeping them alive through the board-clearing sorcery. It was crushing. The Charm served double duty as a potential answer to Assemble the Legion, but it was the regeneration that just crushed this matchup. With Lopez tapped almost completely out, all FitzGerald had to do was untap and attack once and he had sealed the match.

On the other end of the table, the Chilean Rookie of the Year and his aggressive Jund list were embroiled in their own match against UWR Flash, this time piloted by the Irishman Stefano Rampini. This match was not quite as compelling as the previous one, mostly due to an incredibly one-sided second game, where Rampini fell afoul of mana troubles and just got steamrolled by Tapia Becerra. The first game had the chance to be a reasonable match, but Tapia Becerra simply ripped like the Rookie of the Year he is, drawing the perfect cards at the perfect times to absolutely dominate Rampini. 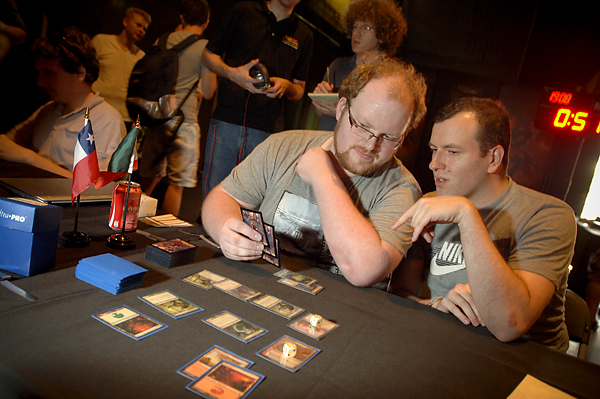 Sean FitzGerald and Dave Tuite discuss some potential plays that the Domri Gruul player can take in his tense game against Rodrigo Lopez.

First came the early start of Diregraf Ghoul and Lotleth Troll. To this already aggressive opening, Tapia Becerra added a Blood Artist, which would give him some reach if things managed to stabilize for Rampini. Instead, what happened was Tapia Becerra ripping a Falkenrath Aristocrat for a massive spike in damage. It also gave him a large, evasive, resilient threat, perfect when your opponent untaps and plays Supreme Verdict. Though he was tapped out and couldn't save his Lotleth Troll, Tapia Becerra could just sacrifice his team to trigger the Blood Artist and make his Aristocrat indestructible, giving him the win he needed for the first game.

After the unfortunate second game, the team match score was tied at one match apiece. It all came down to the middle match: Dave Tuite and his Elfball deck against Roberto Castillo and his Gruul Aggro deck. And this match did not disappoint.

Playing two of the most explosive decks in the format, this entire match was nothing but haymakers and clutch defenses. The first game saw Tuite do what Elfball does best: spit out a boatload of mana critters and use them to do something bonkers. In this game, his bonkers play of choice was cast a third-turn Wolfir Silverheart, pair it to an Elvish Mystic, and stomp on Castillo's face. Tuite honestly thought the game was over on the spot, but Castillo had other plans. Having had a fairly quick start himself, Castillo and his Domri Rade found enough creatures that he was able to stay even with the Silverheart and his buddy. He was still losing one of his creatures a turn beyond the one drawn off of his Domri Rade, but he was able to make an incredible turnaround.

Using his own mana critters, Castillo was able to drop a pair of Scavenging Oozes into play and eat the creatures he'd been forced to chump with, padding his dwindling life total. Drawing a Strangleroot Geist to serve as a two-turn blocker, he afforded himself a chance to play a Thundermaw Hellkite. Now equipped with his own set of attackers, he was able to eventually set up a turn where a Hellrider joined the team, allowing him to have Domri fight one of the two remaining blockers on Tuite's side for a lethal attack. It was an incredible comeback against a stupidly good start from Tuite.

The second game was just as incredible, this time for Tuite. Rather than blow up his board with a Silverheart in the second game, Tuite simply built his board with mana critters and Elvish Archdruids. Castillo dealt with some of them, delaying Tuite's progress, the whole while attacking with a giant Thundermaw Hellkite. Tuite simply wasn't doing anything but adding more and more mana critters to his side to fill the places of the ones that Castillo was killing. On his last turn before succumbing to the Hellkite, Tuite made his move, tapping his Archdruids and his lands to drop a Craterhoof Behemoth into play. Combined with the four other creatures on his side of the board, Tuite's Craterhoof grew his army +5/+5, making them exactly lethal. It came from literally nothing but mana critters, and it sent the match into an even more exciting Game 3.

Castillo was a little upset about having lost the second game in that manner, but he perked right up upon seeing his opening draw for the last game. Starting with an Arbor Elf, Castillo found himself able to attack with a Flinthoof Boar for 3 on the second turn, followed by a Ghor-Clan Rampager and Hellrider on the next turns. It was a brutal opening, and it seemed that the game was his. All Tuite had done to begin his game was play a trio of mana critters. Things looked bad for him, even after he resolved a fourth-turn Garruk, Caller of Beasts, and drew a whopping five creatures off of his ability. While there were a bunch of little guys in that bunch, the only really impressive body was that of a Kalonian Hydra, but even it paled compared to Castillo's aggressive position. Castillo sent his whole team. Tuite had a single Elf back to block and had to drop it in front of the Rampager, surviving at four life. He looked to be dead unless something drastic happened.

And then something drastic happened. Tapping seven mana, Tuite dropped an Elderscale Wurm onto his side of the board, adjusted his life total up to 7, and smiled, knowing that there was no way that it was going to go below that against Castillo's Gruul Aggro deck. Castillo had one draw to pluck his only answer from his list, a Zealous Consripts, from the top of his deck to steal the Wurm and allow him to attack for lethal. He swiped his card onto the table, rubbed it, and lifted it to meet his gaze.

He flipped it onto the table and Ireland erupted in cheers. From a bye in the first round to undefeated at the end of Day 1, Ireland's journey had been full of surprises. At least now, they have all night to let it sink in that they are the team to beat come morning.