Both at 5-1, Ishida and Higashino are in a favorable position to reach Top 8. Higashino has drafted an aggressive red-black deck with a splash of white for support. Among the more notable cards in his deck are the 2 Arcane Teachings and Jeska, Warrior Adept he picked up in . Although the consensus is that red is weak in the environment, Higashino has been able to pick up the best cards and put them together into a powerful deck. His opponent Ishida has put together a green-blue deck with a touch of black for Patriarch's Desire, Morgue Theft, and to pump his Balshan Collaborator. 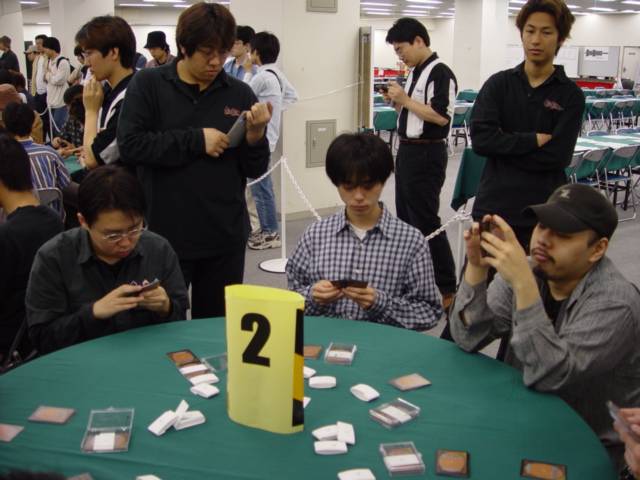 After shaking hands, the match began with Higashino going first. Both players spent several turns quietly playing lands. Ishida made the first move, playing a Nullmage Advocate. Higashino responded with a Petravark, taking out Ishida's single Forest. When Ishida passed, Higashino upped the pressure by bringing out Filth. Unable to block the swampwalker, Ishida was now on a 10-turn clock. At the end of that turn, Ishida used AEther Burst on the Petravark to get his Forest back. With four lands on the table again, he brought out Balshan Collaborator, attempting to take back tempo from Higashino. Higashino had other plans, though. Knowing he needn't fear AEther Burst, he slapped Arcane Teachings on Filth, and attacked, then eliminated the Collaborator with a Sonic Seizure. On the ropes, Ishida tried to stabilize by using the Advocate's ability to remove the Arcane Teachings, returning the Sonic Seizure to Higashino's hand, then using Patriarch's Desire to take out the Filth. Still, although the immediate threat had been dealt with, Ishida made all of Higashino's creatures unblockable. Higashino quickly took advantage of the situation, playing a number of small creatures and attacking every turn. Ishida was unable to mount a counteroffensive quick enough and soon went down.

Ishida's solution for Filth in the second game was to side out all his black. The second game started with Ishida playing conservatively, dealing with Higashino's creatures rather than playing any of his own. Eventually, the board stabilized with a Rabid Elephant, Hydromorph Gull, and Balshan Collaborator on Ishida's side facing down Pardic Firecat, Dwarven Scorcher, and a Petravark hiding a Forest on Higashino's side. Leaving the Elephant back to hold the line, Ishida began attacking with his fliers, but lost the Gull to a Ghastly Demise. Firming up his ground defense with Acorn Harvest, he passed to Higashino. Going for broke, Higashino attacked with all his creatures. When Ishida blocked the Firecat with the Elephant, Higashino unleashed a barrage of fire at it, using the Dwarven Scorcher's ability, followed by Engulfing Flames. Holding onto AEther Burst, Ishida chose to trade. At the end of this exchange, Ishida's life total dropped to 10, while Higashino remained at a comparatively high 16. Trying to win the damage race before the fliers got him, Higashino brought out Filth and played Arcane Teachings on it--which is exactly what Ishida had been waiting for. With a smile, he played AEther Burst in response to the Teachings, causing Higashino's shoulders to slump. Regrouping, Higashino made a Goretusk Firebeast, only to have Ishida respond by increasing his air force, putting Ghostly Wings on a Cartographer. Higashino put up a valiant fight, knocking Ishida's life down to 1, but in the end couldn't deal with the fliers. 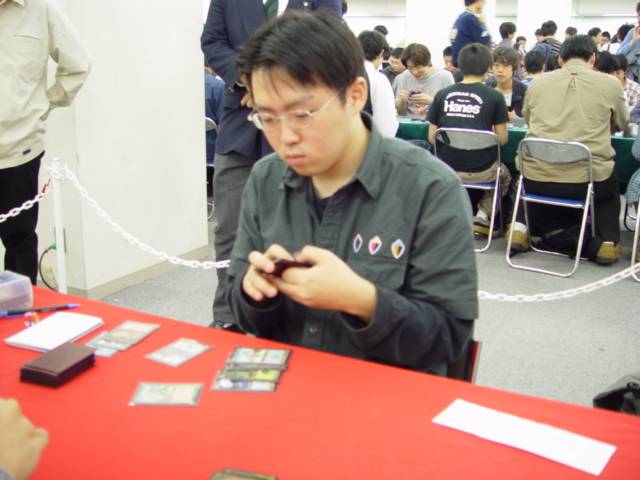 Higashino started game with a strong hand, following a Cabal Torturer with a fourth-turn Whispering Shade. Ishida's first play was to bring forth the Collaborator. Higashino responded by powering up the Torturer with Arcane Teachings and swinging. Seeking to slow down Higashino's offensive, Ishida used Ghostly Wings to bounce the Torturer, then counter it with Liquify. While this left Higashino with only one creature, it also drained Ishida's hand. Unfortunately for Ishida, Higashino had been holding onto another Arcane Teachings. Ishida bought time by creating chump blockers with Chatter of the Squirrel, and also producing a Hydromorph Gull hoping to bring the fight to Higashino. That hope was shattered when, after playing a Pardic Firecat, Higashino fried the Gull with Sonic Seizure and attacked for the win.