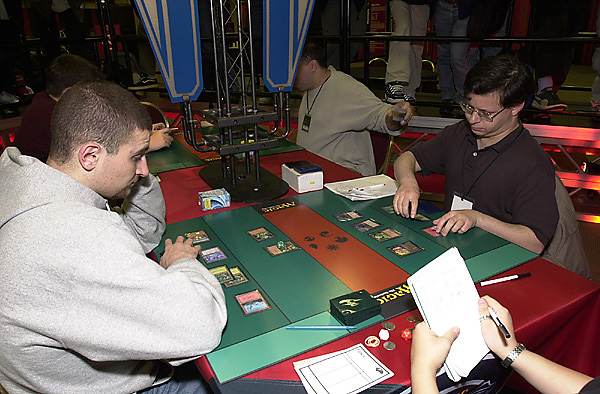 Pustilnik won the die roll and chose to play first. His opening hand had two lands, and a couple of creatures and a Ghitu Fire, and he kept it. Jon's hand was much slower. He had five lands and two pretty expensive spells, but he chose to keep as well.

Mike got off to a pretty fast start. He cast a turn one Llanowar Elves, turn two and three Chimeric Idols and a turn four River Boa. Jon cast a turn two River Boa, but already at turn four he found himself at 13 life in spite of him blocking one of the Chimeric Idols. He was holding a Kavu Chameleon and a Saproling Burst in his hand, unable to play them though as he had no mana accelerators.

However, Pustilnik ran into mana problems. He had missed his fourth land drop, and he failed to draw that all-important fourth land he needed to be able to play his rather important five casting cost spells. Instead, he had to put regeneration shields on his Boas and attack with his creatures, and he got Finkel down to eight life before a Finkel dropped a Saproling Burst. 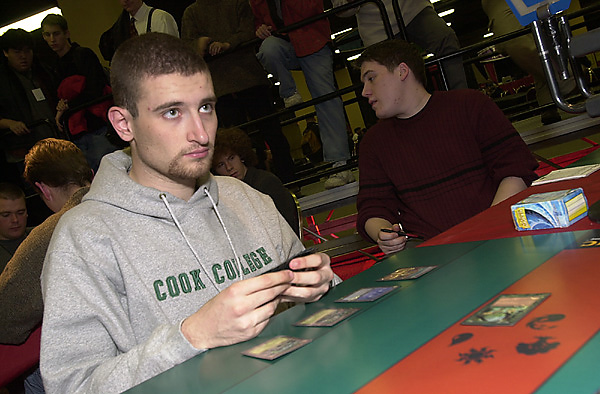 Finally, Pustilnik drew something that he could actually play, and he summoned a Blastoderm. But during his end of turn step, Finkel made a token that became 5/5 during his own turn. He then attacked, Pustilnik triple blocked with two Chimeric Idols and the Blastoderm, and the Blastoderm went to the graveyard. Finkel then cast Ancient Hydra and shot Pustilnik's Llanowar Elves, putting him even further away from the crucial five mana.

In order to shoot the Elves, Finkel had to tap out, so Pustilnik took the opportunity to get rid of both the Hydra and the River Boa. He put a regeneration shield on his own Boa, and then he cast Earthquake for one. Finkel made another token though, and attacked with it to reduce Pustilnik's life total to 14. He then cast a Kavu Chameleon, and passed priority before using his Rishadan Port to tap down Pustilnik's Mountain.

Pustilnik, now on the defensive, drew a Llanowar Elves and played it. He then passed priority to Finkel, who untapped and played Fires of Yavimaya and then a Saproling Burst. Removing three counters, he made three 4/4 tokens before attacking with the tokens, the other 2/2 token and the Kavu Chameleon. Pustilnik put a regeneration shield on his Boa, and then he activated his two Chimeric Idols and blocked the Chameleon and two tokens. Before damage, Finkel sacrificed his Fires of Yavimaya to save the 2/2 token and to kill the Idol blocking it. Still, Pustilnik was down to six life, and things looked bad for him. 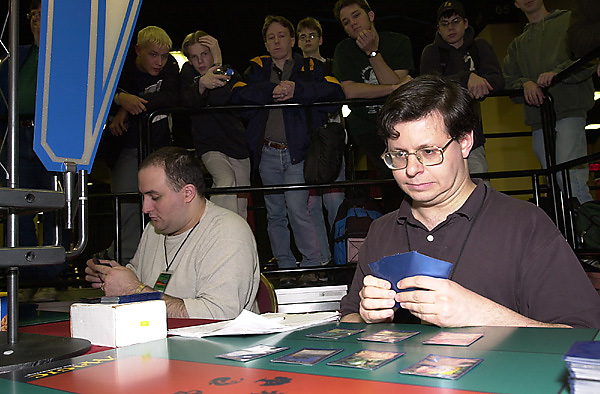 But during his ninth turn, Pustilnik drew a fourth land. He immediately played it and dropped a Saproling Burst, which effectively saved him from Finkel's attack. Finkel just cast a River Boa and passed priority. Pustilnik then drew a fifth land, a Brushland, and he cast a River Boa before giving Finkel another turn.

Finkel didn't do anything though, and during his end of turn step, Pustilnik cast an Aura Mutation on the Saproling Burst that still had counters on it, killing Finkel's three creatures and giving himself five Saproling tokens. He then removed three counters from his own Saproling Burst to make three more tokens, and Finkel scooped.

Finkel chose to sideboard in a Rith, the Awakener, Aura Mutations and Tangles. Pustilnik also did some sideboarding, although he kept whatever he did a secret. Then the two players went on to shuffle, and Finkel chose to play first. His opening hand was pretty good, he had a Karplusan Forest, a Rishadan Port, a Birds of Paradise, a Saproling Burst, an Aura Mutation, a Chimeric Idol and a Fires of Yavimaya. Pustilnik's hand was also decent, although he lacked mana acceleration. He held a Karplusan Forest, a mountain, a Rishadan Port, a Fires of Yavimaya, a Chimeric Idol and two Kavu Titans.

Finkel cast a turn one Birds of Paradise, and then he got out the turn two Fires of Yavimaya. Pustilnik's start was much slower. He played a turn two River Boa, but Finkel then cast Chimeric Idol and thanks to the Fires, he could start attacking right away. Pustilnik then got out an Idol of his own. But Finkel dropped a Llanowar Elves and another Idol, and in spite of the two players trading Idols, Pustilnik was down to 13 life after the attack.

Pustilnik played a Rishadan Port during his fourth turn, and he used the Port to tap down Finkel's Port during his upkeep. Finkel had stalled on three lands, and missed another land drop. So all he could do was to attack with his Idol, and Pustilnik blocked it with his Boa which he regenerated. Then, Pustilnik cast a Kavu Titan with kicker.

Finally, Finkel drew a fourth land, and with five mana available, he cast Saproling Burst. After thinking for a little while, he made three tokens, and Pustilnik scooped. 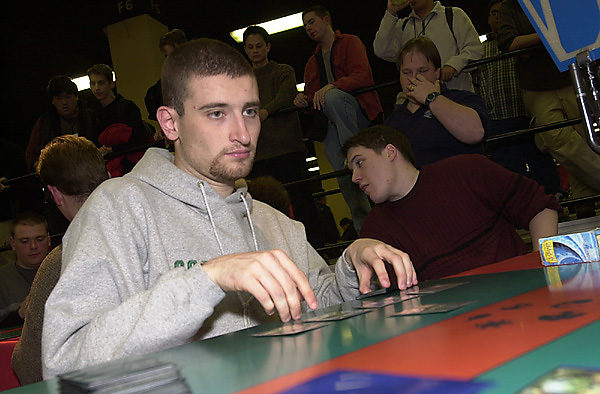 Mike got to play first in the third game, and he kept a hand consisting of a Rishadan Port, a Forest, a Mountain, a Brushland, an Aura Mutation, a Kavu Titan and a Saproling Burst. Jon kept his hand as well, which consisted of a forest, a mountain, a Birds of Paradise, a River Boa, a Fires of Yavimaya, a Saproling Burst and a Tangle.

Again, Pustilnik got a pretty slow start. He played Mountain, Rishadan Port, forest and then a turn three Llanowar Elves. Meanwhile, Finkel got out a turn one Birds of Paradise, and although Pustilnik used his Rishadan Port to tap down Finkel's forest, he got out both turn two and turn three River Boas.

During his turn four, Pustilnik played a Kavu Titan with kicker, and he seemed to stabilize the game. Finkel, who still hadn't drawn a fourth land, attacked with his two River Boas to get some damage through. Mike blocked one of them and went down to 16.

Finkel's following attack took Pustilnik down to twelve, and then Finkel got out a Chimeric Idol that joined the two River Boas. Pustilnik then tried to cast a Saproling Burst, only to see it Aura Mutated by Finkel. Finkel then attacked with his Idol and the Boas to reduce Pustilnik's life total to five.

Facing one Idol, two Boas and five Saproling tokens, Pustilnik desperately tried to survive. He Ghitu Fired one of the Saproling tokens, and then he played a River Boa so that he would be able to block Finkel's three biggest creatures and go down to one life only. But Finkel played a Fires of Yavimaya and attacked for the victory.