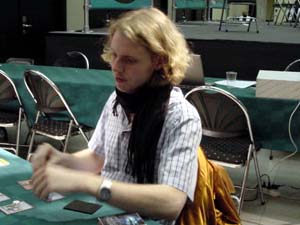 seven and both of these experienced players find themselves heavily ensconced in the draw bracket. Scheurs has managed to pick up two draws so far - "Because I have to read every card." - while Lippert has one. Schreurs is an old school Dutch player and won a GP back in the early mists of time. Lippert hasn't matched that feat but has found himself in the final eight on a number of occasions.

Lippert won the roll and elected to start. He got the non-broken Affinity start - only a Frogmite and Worker in play at the end of turn 2. A Disciple of the Vault with the help of a Chromatic Sphere made things look a little better. Unfortunately Schreurs, running Elf and Nail, had got the amazing bouncing Shaman start and Lippert was losing a land a turn. By this time he had two Disciples in play so the game was not actually going too badly for him. A Myr Enforcer dropped out to leave the game poised.

A Chrome Mox got Schreurs up to 6 mana and a Triskelion came out. It was the real old-fashioned dustbin head as well, not one of those trashy Mirrodin imitations. I said Schreurs was old school.

With both of Lippert's Disciples heading to the bin with arms through their heads the German was not in good shape. The rest of the game was pretty much: Boing, kill a land until Lippert decided he'd had enough and packed in his cards.

Lippert opened Game 2 with an Arcbound Worker and Ravager. Meanwhile Schreurs deck rocketed up to five mana available on turn 3 with a Bird of Paradise and Wood Elves. A Symbiote topped off a powerful second turn.

Not to be outdone Lippert replied with a fairly ludicrous third turn that saw him cast two Thoughtcast and drop a Worker.

Both decks seemed to be fizzing along as Schreurs found a Fierce Empath for more silliness with the Symbiote. Lippert cast a third Thoughtcast and dropped a Skullclamp.

Schruer's turns were getting ludicrous now. A Vernal Bloom then a bouncing Wood Elf and finally an appearance from the walking dustbin. A bolt took out the Trike and it machined gun down the Worker and forced the Ravager to eat the 'clamp as a passing shot. The Symbiote heroically dived in the way of a 6/6 Ravager and suddenly Lippert was starting to look good as he added a Hoverguard to the mix.

The Empath came back and fetched out another Triskelion. Schruers seemed to have an endless stream of available blockers as the Wood Elves returned with a Vine Trellis. The Trike shot down the Hoverguard and a Skullclamp started rifling through Schreur's deck.

A second Skullclamp from Lippert started to do the same thing.

"That helps," Schreur said, drawing the Tooth and Nail and casting it with Entwine. 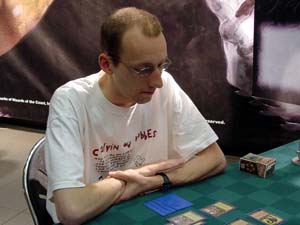 He went for Akroma and a Symbiote, dropping the Angel of unfeasibly many abilities and a Herald. The Herald dropped to the clamp and dug out a Shaman as all kinds of hell were unleashed upon Lippert. He had two blasts in hand, but Schreurs was at 13. A second Shaman opened a big trapdoor beneath the German and he had no other option to concede in the face of the craziness erupting from the Dutch player's deck.