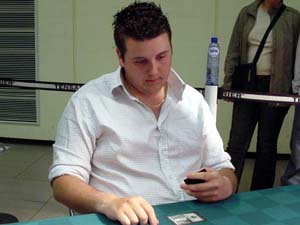 players come into this round with perfect 6-0 records and are already sure of a place in tomorrow's competition. Mario is playing the Italian Elf and Nail deck and Bas is running the Dutch Goblin deck; a real battle between countries.

Mario plays first and has the all important Skullclamp turn 1 with a nice follow up in Vine Trellis and Vernal Bloom. Bas also has a Skullclamp. Some Goblins die in order to draw him some more cards but all he has is a Clickslither.

Mario puts his Skullclamp in better use as he starts to look for a Tooth and Nail. A couple of Wood Elves and Birds of Paradise later he has found it. On the next turn he fetches Darksteel Collossus and Triskelion and puts them right into play.

That's end of game as Mario was still on 15 life and Bas has nothing but 2 Clickslithers.

"That draw was perfect" Mario Pascoli.

Bas has to mulligan his opening 7 but seems happy with his next 6. No turn 1 or 2 plays though for Bas.

Mario on the other hand starts off just fine again with a turn 3 Vernal Bloom. This makes him play a Triskelion on turn 4. The Triskelion takes out a Warchief and a Sharpshooter and Mario plays a Skullclamp and a Wood Elves. 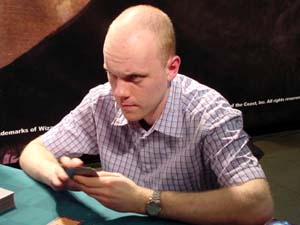 Things look very bad once again for Bas, especially when Mario plays a Tooth and Nail next turn to put a Duplicant, targeting Clickslither, and yet another Triskelion into play. Bas still tries to put up a fight but it's useless as Mario's draws have just been too good this match.

Mario admits this is his worst matchup but with these draws Bas was never really part of the match.