Both German players were unbeaten going into round 7. Rene Kraft made top 8 at GP London last year. Jensen is another local Hamburg player who benefited from a trial with 3 byes. 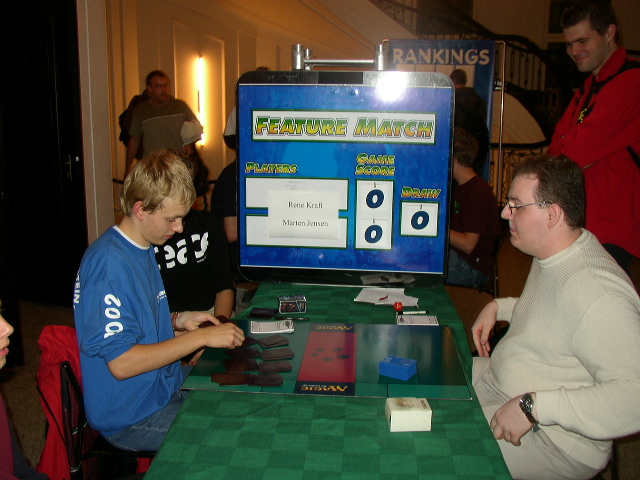 Jensen went first and busted out a Mongrel and then used Quiet Speculation to put two Roars and an Acorn Harvest into the graveyard. Kraft summoned a turn two Millikin, which accelerated him to a Fiend (taking second Mongrel) and Nantuko Shade. A Faceless Butcher took care of the first Wurm token and the second Wurm met the same fate.

Jensen was running out of creatures, his sole Mongrel against Kraft’s double Butcher, Nantuko Shade and Mesmeric Fiend. A Second Mongrel leant some support and the Acorn Harvest was flashed back to shore up the defences.

Kraft’s Millikin had been doing sterling work though, turning over an Ichorid, a black creature to feed and an Aether Burst to make the one in his hand all the more effective as both dogs went yelping back into Jensens hand. The squirrels chumped and Jensen was down to a precarious 4 life.

Upheaval was on hand to reset the game and Jensen relaid an island and then Careful Studied into a Rootwalla. He only had 3 life so Kraft’s Ichorid was potentially a big problem. That problem was doubled as a second Ichorid was discarded with enough food for both. A third Aether Burst to clear the road and it was time for game 2.

Jensen opened again with a turn two Mongrel. Kraft Aether Bursted it and then tried to snipe out Jensen’s forest with a Rancid Earth. Jensen had plenty of forests (he’d already thrown one to Careful Study), but then Braids appeared to give him a choice of keeping the Mongrel or getting up to four mana to flashback the Roar in his graveyard. Jensen chose to keep the Mongrel only for it to vanish beneath a Faceless Butcher. He had a backup Mongrel, but Kraft had a backup Butcher and when Jensen failed to lay a land the following turn that was all she wrote.