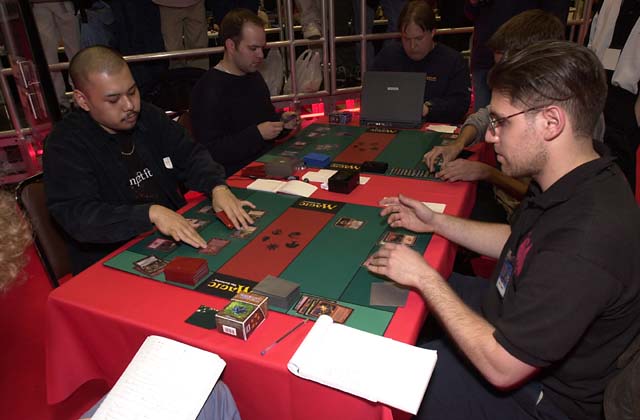 Now that the policy for advancement to Day 2 has been changed, players who stand at 3-3 after six rounds still have something to play for. This round, Mark Rosewater chose the most exciting of these make-or-break matches to take place in the Feature Match Area.

Danny Mandel is no stranger to this situation. At Pro Tour-Los Angeles, he had to play out his last round to make Day 2. He then went on to post a spectacular record, ending up twelfth overall. Standing in the way of his repeat performance was Grand Prix Hiroshima Champion Masayuki Higashino, one of Japan's superstars.

The match got underway with a vengeance and Higashino's Nightscape Familiar. Mandel answered with a Thornscape Familiar. Higashino played out another Familiar of his own, then removed Mandel's with an Urza's Rage that masqueraded as a Lightning Bolt.

Mandel had no play at three land. Higashino hit him for two and played a Pyre Zombie. Mandel dropped Raging Kavu at end of turn, then untapped and dropped Overabundance, his remaining land powering a Ghitu Fire on the Zombie. Higashino took three blowing up the Zombie with Urza's Rage 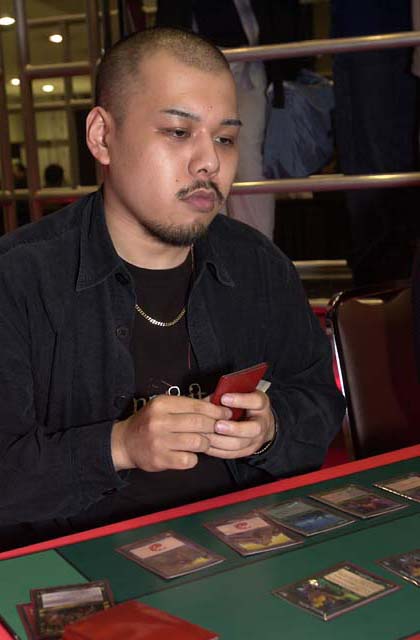 Higashino attacked for two and passed the turn. Mandel thought for awhile before taking four to Ghitu Fire Higashino for seven. Both players stood at ten life. Higashino kicked up a Skizzik and dropped Mandel to seven. Caught under his own Overabundance, he conceded.

Higashino kept a two-land hand for Game Two. He Addled for red, catching a Flametongue Kavu, but seeing another and a Thornscape Battlemage in his future. He was already under pressure from Mandel's Thornscape Familiar. To make matters worse, he stalled at three land. Mandel sent two to the face with the Battlemage. Higashino played Ravenous Rats, but that only opened the door for the second Flametongue. It was over in moments.

Mandel mulliganed for the crucial Game Three. An Addle for Red forced him to discard a Flametongue Kavu, but showed that he had four two-drops and just enough land to get them rolling.

Higashino's Ravenous Rats removed a Skizzik, then stripped Mandel's hand of Thornscape Familiars with a pair of Addles. Unfortunately for him, Mandel already had two unkicked Kavu Titans on the table and was beating down.

Higashino made a Nightscape Familiar that could double-up with the Rats to remove a Titan. When Mandel passed the turn back to him, he made a second Familiar and a Flametongue to ice the other. Mandel drew his fourth land just in time to kill the Flametongue.

Higashino played out Pyre Zombie. Mandel removed it with another Flametongue and traded his Battlemage for one of the Familiars. Higashino Voided four, destroying the Kavu. Mandel's lone card was Urza's Rage. He topdecked Overabundance. 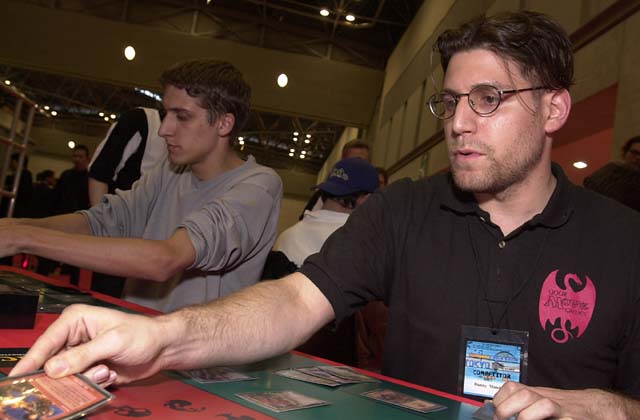 Higashino took two to Void away the Rage. Mandel drew and passed the turn. He was at sixteen life. Higashino was at ten. Mandel took another hit from the Familiar, then tapped three lands to make another Overabundance and Raging Kavu.

This left Higashino in a bind. He eventually chose to take four and Terminate the Kavu. He soaked the excess mana making regeneration shields on his Familiar. Then he put it all on the line, dropping to one for Blazing Specter. Mandel calmly drew Ghitu Fire and won the match.