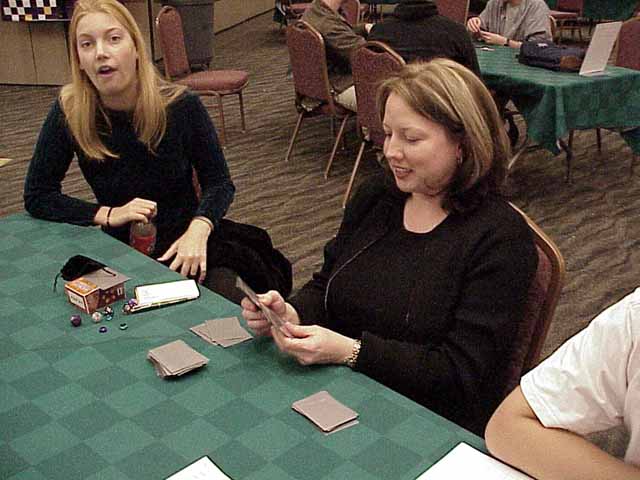 Round 7 matched both of these female competitors against each other with the winner going on to Day 2 and the loser relegated to sitting on the sidelines. Both players played the most popular deck of Grand Prix Phoenix, Necro-Donate. This match was sure to be an attention grabber given the situation. Unfortunately, this match was both brutal and short

Michelle Bush won the roll and started off by mulliganning. Equipped with a 6 card hand, she played a swamp and a mox diamond discarding an Underground Sea. Lauren answered on her turn by laying an Underground Sea and a Mox Diamond discarding a swamp. Michelle proceeded to Duress Lauren on the next turn getting to choose between a Donate, Firestorm, 2 Vampiric Tutors and an Illusions of Grandeur. Michelle claimed one of the tutors, put down an Underground Sea and passed the turn. Lauren Vampiric Tutored for a Peat bog going to 18 during Michelle's end step and then placed it down on her turn.

Michelle laid a badlands during her next turn and passed her turn. Lauren then proceeded to hardcast an Illusions of Grandeur going to 38 and laid a swamp. At Lauren's end step, Michelle then Vampiric Tutored for a Necro. On her turn, she cast it, necroing for 15, looking for an answer to the illusions. She discarded, ending her turn at 3 life.

Lauren let the donate go, going back down to 18 and firestormed Michelle for 1. Michelle conceded being effectively locked down under her own Necropotence. 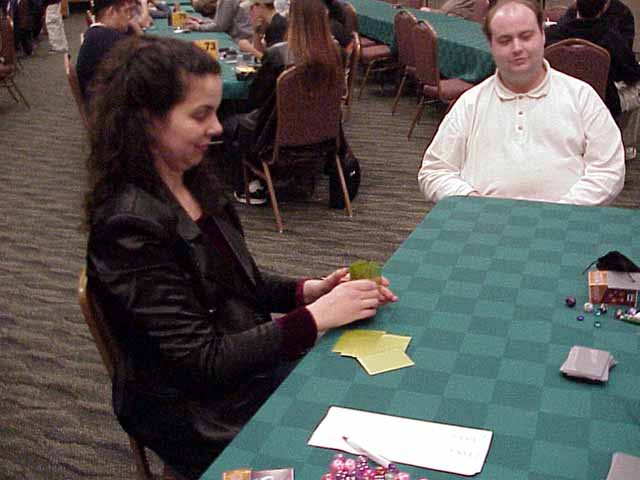 After some heavy sideboarding by both players, Michelle went first again. She played a swamp and duressed Lauren. Lauren showed a Force of Will, 2 Demonic Consultation, a Mox Diamond, a Swamp and 2 Gemstone Mine. Michelle took the Force of Will and passed the turn. Lauren drew, laid her swamp and mox diamond discarding a gemstone mine and ended her turn.

Michelle laid a badlands and said go, with Lauren consulting for a necro during her end step. She blasted through a lot of land during her consult but got her necro about 20 cards into her library. She then played a mox diamond, discarding a gemstone mine and cast her necro. She necroed for 5 and ended her turn.

Michelle answered right back by laying a swamp and cast her own Necro, Necroing for 10. She discarded land, 3 vampiric tutors, and a duress. Lauren consulted for an illusions during her main step which was only about 10 cards down, cast a mox diamond and laid a badlands. She cast her Illusions of Grandeur and necroed for the rest of her deck which only had 14 cards left. 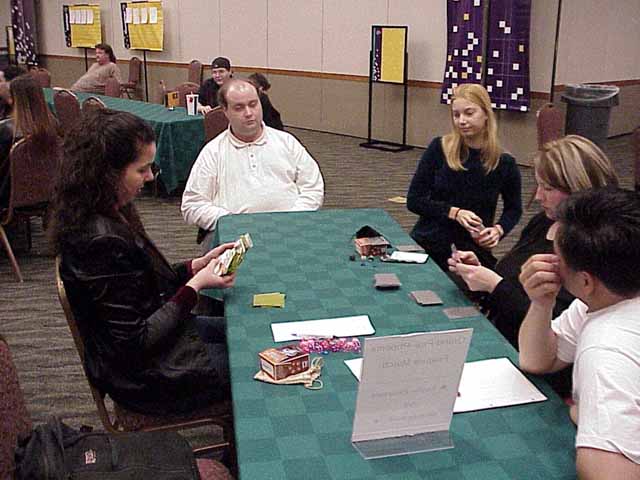 Michelle laid a swamp and duressed Lauren, which was Force of Willed. After looking through the out of game pile, Michelle necroed for 7 going down to 3 life. Lauren donated the illusions during her own turn. In response, Michelle consulted for a Force of Will and alternatively cast it pitching another Force of Will. Lauren answered right back with her own Force of Will. With no other options available, Michelle conceded.