The last round of the first day started around half past twelve at night. Mike Pustilnik and Luis Sousa were both undefeated, and they were both looking for a perfect 7-0 record. Both of them had three byes, Sousa had actually won a Grand Prix Trial tournament to earn the byes. 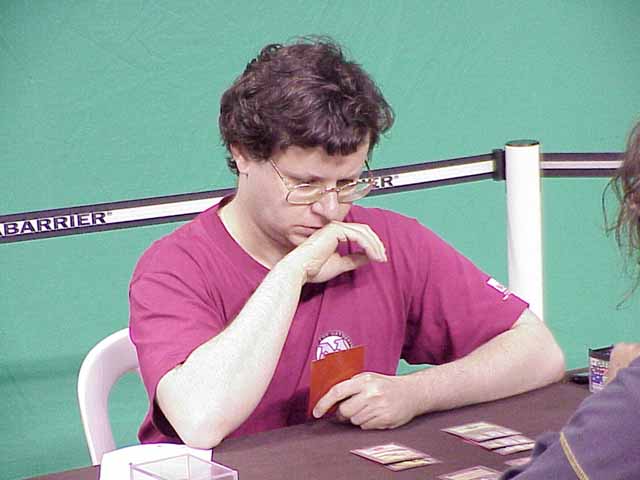 Sosa won the die roll, and he wanted Pustilnik to play first. Pustilnik was quite happy with that. He cast a second turn Deepwood Drummer, a third turn Silt Crawler and a fourth turn Wild Jhovall and started the beatdown. Sousa got out a turn two Agent of Shauku and then a turn four Shield Dancer, and he also took care of the Deepwood Drummer by using a Steal Strength.

Still, the assault continued. Pustilnik played a Spur Grappler, and as Sousa didn't do anything, he dropped a Warmonger during his next turn, declared his attack phase, floated mana to make the Grappler bigger and finally activated the Monger for one. Finding himself at one life, Sousa conceded.

In the second game, Sousa changed tactics and chose to play first. He dropped two lands and a Shield Dancer, so Pustilnik was happy to play a Spidersilk Armor before casting his Wild Jhovall. But alas, the Armor was Abolished and Sousa then played a Giant Caterpillar, a Boa Constrictor and a Defiant Vanguard.

Since Sousa frequently tapped out so that he was unable to activate the Shield Dancer, Mike slapped a Treetop Bracers on the Jhovall and started attacking back. Three attacks later, Sousa was at eight life while Pustilnik was at twelve after trading a Spur Grappler for the Boa. Pustilnik then cast a Living Terrain, setting up for the final kill.

Sousa, blissfully unaware of what was to come, summoned a Rathi Intimidator and said go. Pustilnik happily untapped. Then he blew away three of Sousa's creatures with a Volcanic Wind for six... Sousa sighed, and scooped.