Round 7 Feature Match: A Morbid Battle

Talking to Reid Duke shortly before this match, he was already feeling pretty pumped. Having locked up his first Pro Tour Day Two, he's loving life here in Hawaii. Having tested in a house with Finkel, Jelger Wiegersma, Patrick Chapin, and Gerry Thompson among others, he was well prepared for the event in spite of not having his usual weapon of choice for testing: Magic Online. The Magic Online Championship winner would be facing down Christian Calcano, who having just heard about the New York Knicks result, was feeling even better than he was simply by being at 5-1 on the day. 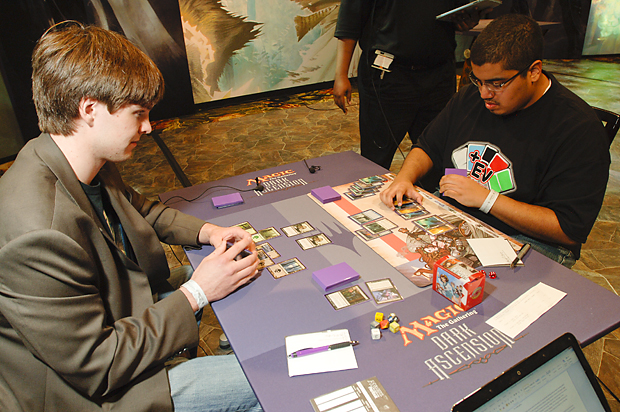 Both Christian Calcano and Reid Duke are doing well today, and both seek to improve their records for a possible Top 8 finish.

Calcano won the roll and started with a Delver of Secrets. Duke had just a Swamp for his first turn, and smiled as he took his upkeep peek to Delver. "Just because I like you," he smiled as he drew for the turn without flipping his creature.

Duke didn't have any play before turn four, while Calcano was busily equipping his Delver with a Blazing Torch, and drawing extra cards with Divination. Duke's first play was a Rotting Fensnake, which looked a little underpowered in the face of an active Blazing Torch. It looked even worse when Calcano played a Silverclaw Griffin and passed. Duke was unconcerned, casting a second snake.

Duke was a little stuck on lands, taking a while to get past four mana. He cast a Brain Weevil, and upon sacrificing it, found that Calcano had quite the opposite issue, watching two Islands get unceremoniously consigned to the grumper. Calcano played a Selhoff Occultist, and looked on as his Delver of Secrets got hit by a Corpse Lunge. He milled himself of a land, and went on to cast Dungeon Geists to lock down a Fensnake. 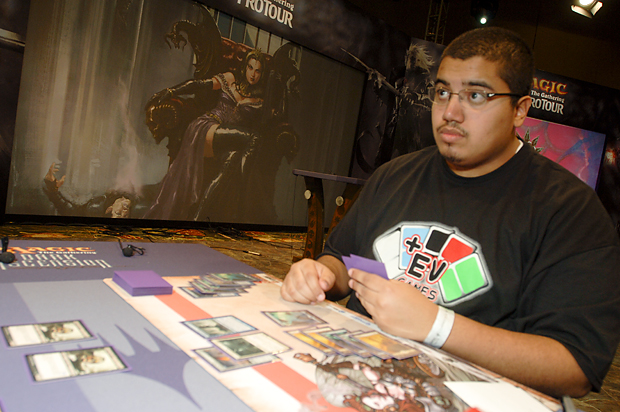 Calcano comes out with both guns – or torches – blazing.

While Duke's Fensnakes had not exactly been doing much, he didn't seem keen to have one tapped down forever, sacrificing it to an Altar's Reap. On his turn he cast a Caravan Vigil to find a Mountain, and used it to cast Harvest Pyre on Dungeon Geists. Villagers of Estwald finished things off for Duke's big turn. The life totals were 15 to 10 in Calcano's favor, he was keen to press the advantage. Bonds of Faith on Selhoff Occultist meant that Calcano's attacks warranted a block from Villagers of Estwald. Even with this Silverclaw Griffin got through for 3. A crack back from Duke made the life totals 10 to 7. Duke played a Lumberknot and Skirsdag High Priest. It seemed unlikely that the High Priest would have time to start cranking out demon tokens, but it would be able to block as well as anything else.

Attacks from the Griffin put Duke to 4 life. One Griffin attack and a Blazing Torch activation would end things unless Duke could do something to change the pace of things. He swung with his team of Lumberknot, Skirsdag High Priest and Rotting Fensnake. He represented 7 damage to Calcano's 10 life. Calcano thought a little, then blocked the snake with Occultist, wary of a pump or burn spell. What he actually faced was a Morkrut Banshee, which cleared Calcano's board. While Christian drew a Stitched Drake, it would be too little to pull back from such a swing, and Reid Duke took a close first game.

Calcano shook his head ruefully as he shuffled up his deck for the next game. His decision to block had cost him, but had he not blocked he would have been open to Brimstone Volley and assorted pump spells to take him out of the game. It would be one that he'd think about again later, but for the time being it was important that he focus on what he needed to do at that moment: move on and win the next two games.

"I think I should have played the turns before that last block better. I had to block, but I'm sure there's something I could have done..." Calcano didn't finish his sentence, as he had done his shuffling following a mulligan and was eager to win two on the bounce to take the match. 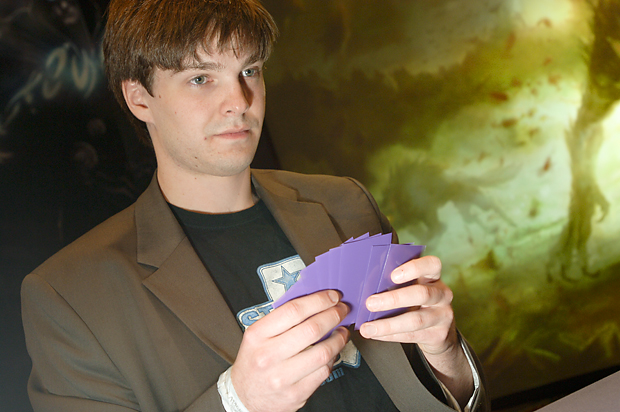 Duke gets a little morbid in his match.

Calcano had just a Voiceless Spirit, and dropped to 14 when he chose not to block Villagers of Estwald. Duke elected not to play any spells, and in Calcano's upkeep his werewolf squad turned to the dark side like so many bored humans. Calcano was not low on life, but that wouldn't last long if he kept taking werewolf hits. A Bonds of Faith on Silverpelt Werewolf (formerly Lambholt Elder) stopped some of the bleeding, but Calcano seemed a little dejected as he had to cast a Niblis of the Mist, which would flip the werewolf back, and allow it to attack.

Duke attacked Calcano to 8, and while Calcano had a Murder of Crows, Duke had the Harvest Pyre to clear a path and end the game.

"One day I'll beat you. I hope it's on Sunday," smiled Calcano as he extended his hand.