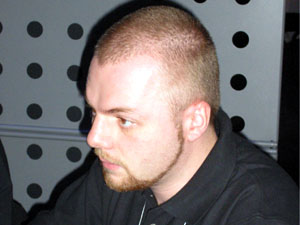 Game 1 was a slugfest from the start. Herzog was on the play and looked very good, opening with a turn 3 , followed by Abyssal Specter on his next turn. Interestingly, Herzog ended up playing Arena in three different formats at this year's Invitational including two limited formats (plus the upcoming Online Extended format). Baberowski also came out well, dropping out a turn 3 Serpent Warrior for strong pressure, followed by a turn 4 Giant Spider to hold back the Specter. Unfortunately for Baberowski, a main-deck meant card advantage city for Herzog, who gained a card this turn from Arena, then , and then took a card with Specter.

Amazingly however, Dirk was still in this. Herzog's next turn brought a Hunted Wumpus into play, which allowed Dirk to drop a Craw Wurm from the bargain bin. Dirk untapped and added an Unholy Strength to his Serpent Warrior, Dark Banished the Wumpus, and sent his team in for a very impressive smashing. Just like that the game had swung 180 and Herzog needed an answer right now. Despite the extra card from Arena he couldn't find anything to hold back that kind of tide and after just 5 minutes of play it was off to game 2.

Nicolai got right into defense mode from the start for this one, playing out turn 2 Drudge Skeletons, turn 3 Coercion (for Dark Banishing) and then a freshly drawn for turn 5. Baberowski was right there with him again though, using a pair of Wood Elves to develop his mana followed by Horned Troll + a Severed Legion and hoping to play a nice fat Spined Wurm the turn after. Nicolai had the Arena-fueled gas to put most of this down though, playing out a Gluttonous Zombie for offense then killing the Imp with Vicious Hunger and playing Mind Rot to strip Dirk of his last two cards, Spined Wurm and Severed Legion.

Dirk somehow again managed to claw his way back into the game, this time Naturalizing the Arena and playing out a Call of the Wild that hit a staggering number of creatures, many of them Craw Wurm-sized. But just as things were getting beyond Herzog's grasp a timely Eastern Paladin meant he had his own card advantage engine. It was down to racing and it wasn't entirely clear who held the advantage. Then disaster struck for Dirk; after reaping so much bounty from Call of the Wild he flipped over a Serpent Warrior that he definitely didn't want on his team at that point in the race. The resulting loss of 3 life didn't kill him outright, but he knew he was done for next turn and conceded the game with a chuckle at this turn of luck. 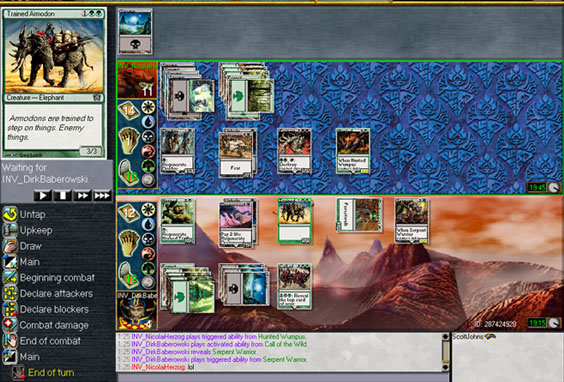 This one started decidedly badly for Nicolai as he got stuck at 2 Forest/1 Swamp and had a hell of a time trying to get out of there. Meanwhile Dirk was summoning an endless stream of monsters that included a Maro, Two Wood Elves, and then an to really make Herzog frown. Even worse (well, for Herzog anyway), just as it looked like he might pull out of his mana problems Baberowski punched him below the belt with a Mind Sludge for 4. When the smoke cleared Herzog had Craw Wurm+Eastern Paladin in hand but only 5 mana and no double black. He howled as the last card came off and his mana still hadn't improved, and he symbolically conceded by casting Mind Rot on himself for the two creatures stranded in his hand.

Baberowski wins a dramatic one 2-1.