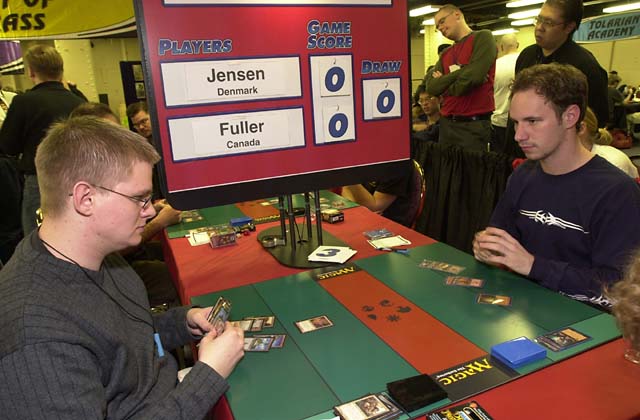 Ryan Fuller is the reigning Canadian National Champion, and competed at the most recent Magic Invitational. His opponent, Niels Jensen (no relation to William Jensen) enjoyed his first championship last year, winning Grand Prix Copenhagen. Jensen's deck boasts multiples of the stock U/W creatures, as well as an unlikely pair of Blind Seers. Fuller's deck is a very solid R/B, with a number of power rares of his own.

Fuller seemed to have an advantage early, when his Reckless Spite destroyed Jensen's Tower Drake and Galina's Knight, making way for his own Rogue Kavu. Jensen used Fact or Fiction to speed his recovery, turning over Faerie Squadron, Benalish Lancer, Benalish Trapper, and two Islands. He received the two white cards, and traded the unkicked Lancer for the Kavu, his Trapper the only creature on the board.

Fuller undid his opponent's advances with a Hypnotic Cloud that caught Wash Out, Benalish Trapper and Angelic Shield, and left Jensen with one card in hand. It was the berries: Angel of Mercy. Fuller's deck finally began producing threats, in the form of Shivan Zombie and Kavu Monarch, but Jensen was getting exactly what he needed. Distorting Wake undid his opponent.

Fuller had the ten mana needed to table his entire army on his next turn. Jensen drew the third Lancer like it was nothing at all, and with the ground stalled out, his tapper and Angel led to victory in short order.

Game two began with Fuller on the horns of a dilemma. Having mulliganed once, he now stared at a one-land hand, and he was going first. He decided to keep, and was exposed when he missed his second land drop. His deck started cooperating, though, giving him first a Mountain to Lightning Dart Jensen's Tower Drake, and then a Swamp to go on the offensive with Urborg Phantom. Maniacal Rage meant Jensen's Razorfoot Griffin wouldn't be blocking, except in desperation. 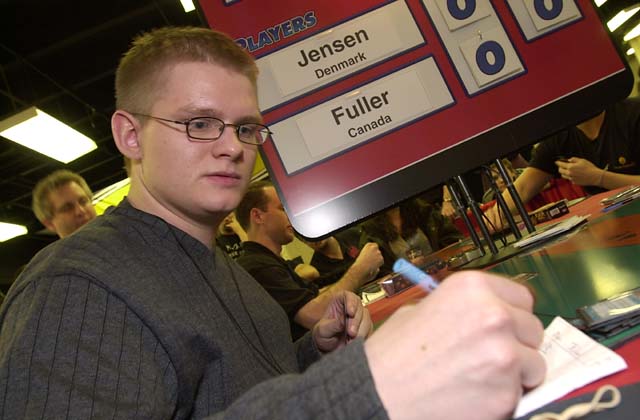 Jensen bounced the monster with an Angelic Shield. Fuller's deck delivered Swamp number two, and he cast Tsabo's Assassin. Jensen drew and passed the turn. The Assassin deep-sixed the Griffin, and Fuller thought hard before bringing out a Shivan Zombie. This color imbalance enabled Jensen to summon a Blind Seer, and to follow it up with a kicked Lancer and enough mana to keep the color-switching ability online.

Now Jensen could bring the noise. Fuller played more creatures, but couldn't find a satisfactory blocking strategy, even after Tsabo's Decree: Legends got the Seer and another in hand. The fact that it was past midnight may have compounded his difficulties. Asking the judge for the time, he was startled by the response.

"Sixteen minutes left in the round? I've been thinking too much!" - Ryan Fuller

He decided not to block, falling to five. Jensen cast a Samite Archer. Fuller attacked with his whole team, and now it was Jensen's turn to think. He had the move figured for a desperate ploy, so he took the lot. Fuller played the Swamp he just drew, his seventh land, which allowed his Soul Burn to reduce Jensen to zero exactly.

Early in game three, Jensen had a Trapper and an unkicked Lancer to Fuller's four land. Fuller played a fifth and summoned a Pouncing Kavu, and then a Kavu Monarch while Jensen stalled at four Plains. Plague Spores reduced that number to three, and freed Fuller's creatures from the Trapper. 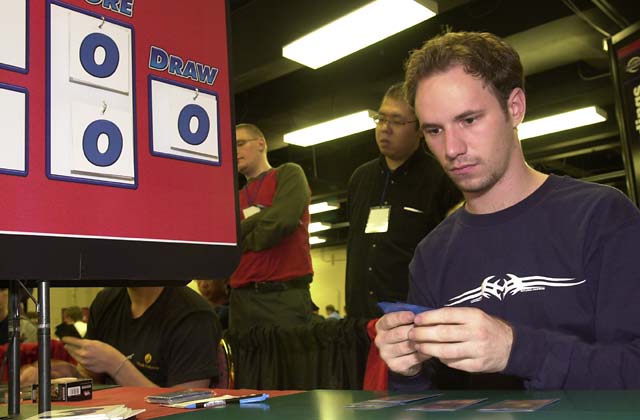 Jensen finally found an Island to go with his hand of blue cards and made a Galina's Knight. Fuller untapped and cast Tsabo's Decree: Knights, removing the Merfolk and the Lancer. Maniacal Rage on his Monarch knocked Jensen to three.

Time was called on Jensen's turn. He had some meager defenses. Fuller had the Soul Burn.