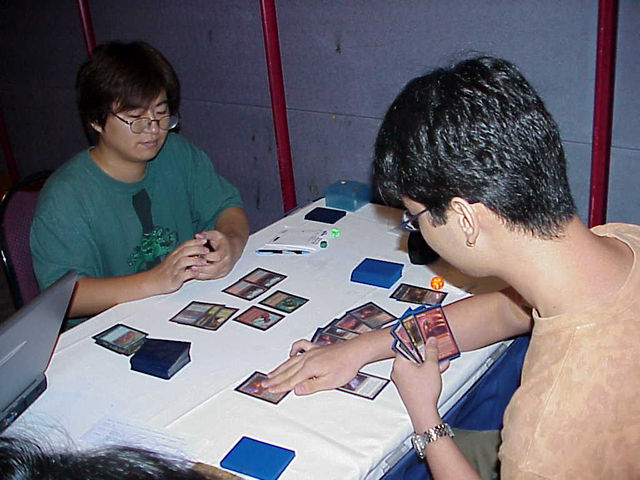 Okamoto is the current reigning APAC Champion, while Wong is an ex-national Champion, having won the Singapore National Championships last year. Both players are 5-1 coming into this round. The winner will be able to sleep well tonight, knowing that 6-1 will usually be enough to bring oneself to the Top 8. The loser will end up 5-2, and may have to sweat his tiebreakers in order to make the next day.

Okamoto is playing the much noticed 'Monkey, May I?' deck. He played it yesterday at the last minute Trials, and nobody believed that he would take the same deck to the Grand Prix.

Well, he did...and he's only lost once today.

He also managed to draw a perfectly good hand to keep for the first game. On the other hand, Wong stared at six lands and a Blazing Specter. While many people complain about the tendency to manascrew in Invasion Block Constructed, people often forget its infamous counterpart: manaflood. Wong quickly went back for a second hand, and was rewarded with four lands and a pair of Legionnaires. Playing first, Okamoto opened up with one of the well recognized 'Monkey, May I?' openings: second turn Blurred Mongoose with a Shivan Reef in play.

On Wong's turn, the bears began to come into play. A freshly drawn Shivan Zombie threatened to block the Mongoose, but Okamoto decided to Urza's Rage it away and attack for 2. Wong replaced it with a Goblin Legionnaire. Not willing to trade with the Goblin, Okamoto held back the Mongoose. Refusing to play around Mystic Snake, Wong played another Shivan Zombie, whereby Okamoto responded with a Mystic Snake. Then, Wong played a Goblin Legionnaire with his remaining mana.

Okamoto's slow, meticulous and careful play revealed nothing about his game state, and he decided to attempt to race Wong's efforts by attacking with both creatures, and Urza's Raging one Legionnaire while Wong had no mana available to use either ability. Come Wong's turn, it was his turn to decide to hold back, as the Legionnaire could block the Mongoose, and throw itself into the Mystic Snake. So, of course, Okamoto attacked with the Snake and Wong declined to block.

At this point, both players seemed to draw lots and lots of land. Unfortunately, that's where the parity ends. With cards such as Prophetic Bolt to make good use of land, Okamoto had no problems in finding the Urza's Rage needed to finish off Wong. 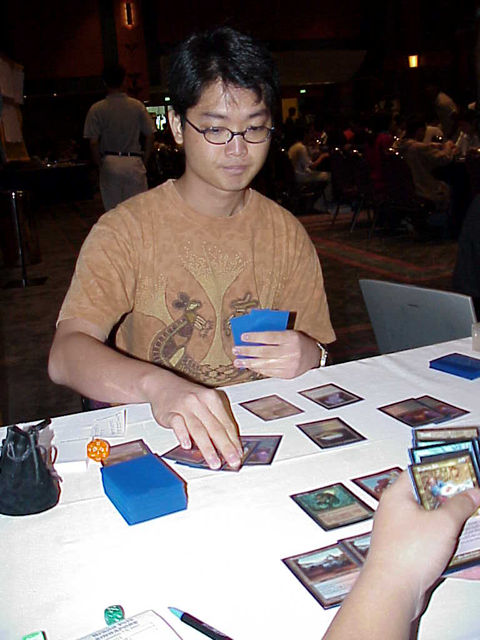 Wong chose to play first in the second game, but before that he switched an Obliterate and two Night/Days in favor of a Slay, a Goblin Trenches and a Flametongue Kavu from his sideboard. Okamoto brought in four Jungle Barriers and four Flametongue Kavus, which replaced the Mystic Snakes and Urza's Rages.

Again, the ever-persistent Specter came in to eat away at Okamoto's hand. Wong still had a Spectral Lynx and a Goblin Legionnaire in his hand, but chose to play around Exclude and not cast any of them. Indeed, Okamoto had the Exclude, along with both Gaea's Skyfolk and a second Prophetic Bolt that was ready to take out the Specter. The Spectral Lynx that had been pestering Okamoto for so long met with a Repulse, and the Kavu Titan and Flametongue Kavu finally had a chance to exit the red zone alive. 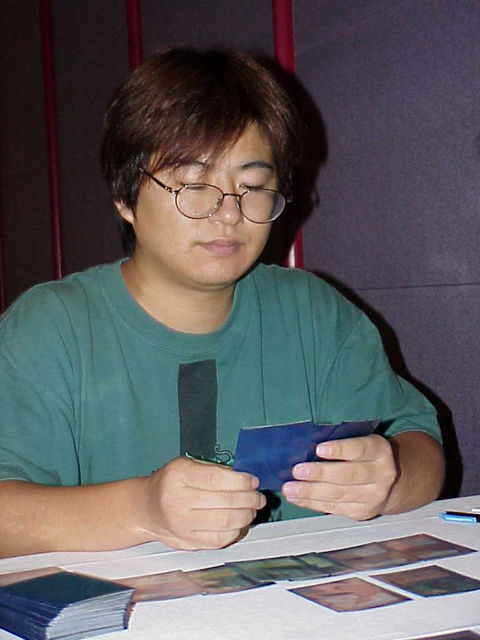