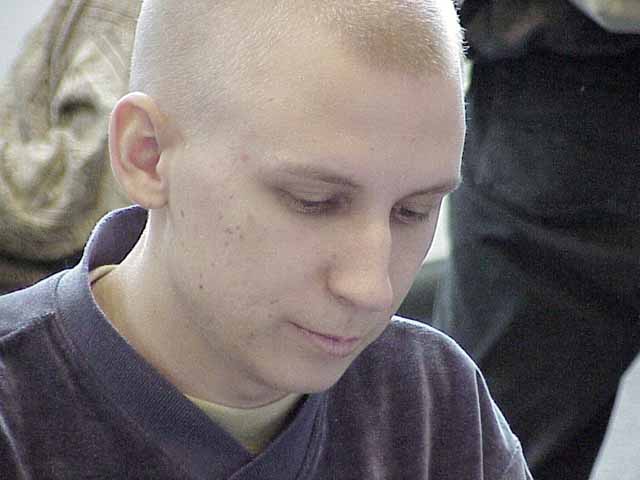 In the last round of the Sealed Deck portion of Grand Prix Helsinki, the old-timer Olle Råde faced the unknown Norwegian player Ole Christian Fjeld. They were both at 3-3 and had no way of making the cut to the second day, however, Ole didn't want to draw and so the match was played out - on the feature match table.

Olle Råde got to play first, and he cast a turn one Thornscape Apprentice and started attacking. Ole got out a Dream Thrush that he tRåded for the Apprentice, and he then cast a Razorfoot Griffin to stop a Hooded Kavu that had come into play on Olle's side of the table. Olle dropped a Kavu Scout as well, but Ole had yet another flyer, an Angel of Mercy. The flyers got Olle down to 13 life, and when Ole cast an Ardent Soldier with kicker, things looked good for him.

But Olle had a plan - during his next turn he cast Rout, forgetting though to attack first, a fact that he commented on later in the game. Regardless, the tables were turned, and the Swede started building up his offense by playing an Ancient Kavu. Ole cast Fact or Fiction to re-fill his hand, and he chose a pile with an Ardent Soldier, a Repulse and two islands over a Glimmering Angel. The Ardent Soldier then came into play with kicker, and Olle's Ancient Kavu was Repulsed.

When the Ancient Kavu came into play again, and when a Benalish Lancer with kicker was killed by an Agonizing Demise with kicker, Ole started to feel the pressure. He even started regretting that he didn't take the Angel. But he played a Traveler's Cloak on the Ardent Soldier so that he could attack for two each turn, and after Olle added a Sparring Golem to his offense, the Norwegian cast Probe with kicker to improve the quality of his hand.

Olle continued to attack and got the Norwegian down to five life, and he also cast an Urborg Shambler that joined into the attacks. A Shoreline Raider and another Benalish Lancer with kicker wanted to stop the offense, but the Lancer inhaled some Plague Spores and Ole found himself at three.

Needing a way to stabilise, Ole summoned a Benalish Heralds that started blocking, and he also Recoiled the Urborg Shambler just to see it back on the table that same turn. Another Probe with kicker gave the Norwegian a Prison Barricades which helped. However, Olle dropped a Pyre Zombie during his next turn, and Ole scooped.

In the second game, Ole had to mulligan twice, and the game was far from exciting. During the whole game, Ole played one island and one swamp, that was it. Olle, on the other hand, played a turn three Kavu Aggressor, a turn four Phyrexian Slayer and a turn five Angel of Mercy - to which Ole simply conceded.