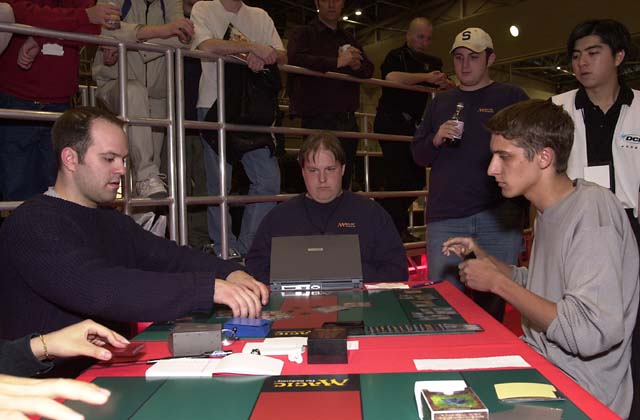 It was do-or-die time in round 7. All the players with 3-3 records knew they had to win if they wanted to keep playing tomorrow. Among those players were Pat Chapin and Mike Long, two of the most entertaining talkers on Tour. They started by commiserating about being forced to play on the Feature Match mats. Long nearly got a game loss in L.A. for refusing to play along with the zones and Mark Rosewater was indeed forced to come over again and berate him some more.

Chapin is running a blue/black/red control because, as he explained it to me on Thursday, "rock is strong." It's expected and he knows it's expected, but it's still quite good. Long is playing a black/red deck with more removal and more aggressive creatures, but fewer card advantage cards. The first real action came on turn 4 when Chapin used Lobotomy to deprive Long of all his Skizziks. Next, Chapin played Fact or Fiction revealing Yawgmoth's Agenda, Swamp, Fact or Fiction, Undermine, and Crosis. Chapin took the Agenda plus the Swamp. Chapin's next Fact or Fiction revealed Void, Opt, Agenda, Salt Marsh, and yet another Fact or Fiction. Chapin took the Opt and the Void, using Void to send Long's entire offense - three Thunderscape Apprentices - 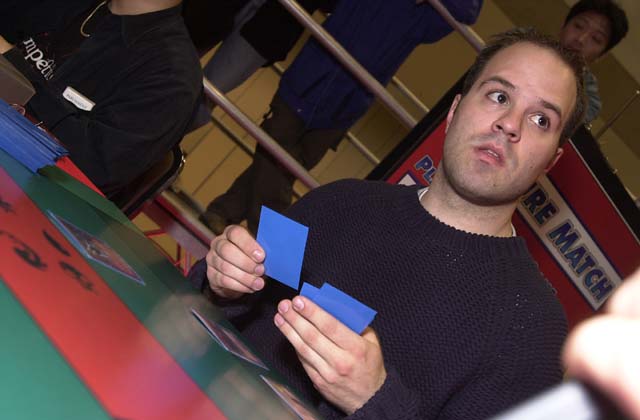 Mike Long to the graveyard. Long's board position at that point consisted of five lands and three Terminates in hand. Chapin used a second Void and said "two." Long informed Pat that he (Long) might not be winning this game. There was one card in Chapin's graveyard when he finally played Yawgmoth's Agenda. Chapin seemed unusually quiet and his hands were shaking a bit even though Long had no non-land permanents and no cards in his hand. Long has that effect on people, especially people he has successfully mind gamed in the past. Chapin had no trouble finishing Long off this time, though. Two Urza's Rages later, they moved on to game two with Chapin up a game.

Game 2 was similar. Long didn't have a very aggressive draw and Chapin was under no pressure when he played Fact or Fiction. He got a Lobotomy, an Undermine and a land while Fact or Fiction and Opt went to his graveyard. When Chapin played that Lobotomy, he took Long's only spell (a Terminate) and got to see how Long had sideboarded. It turned out that Long's deck was incredibly aggressive, including Shivan Zombies, Vicious Kavus, and Skittish Kavus. However, after one mulligan, he had no real choice but to keep a 6-card, 5-land hand. When he then 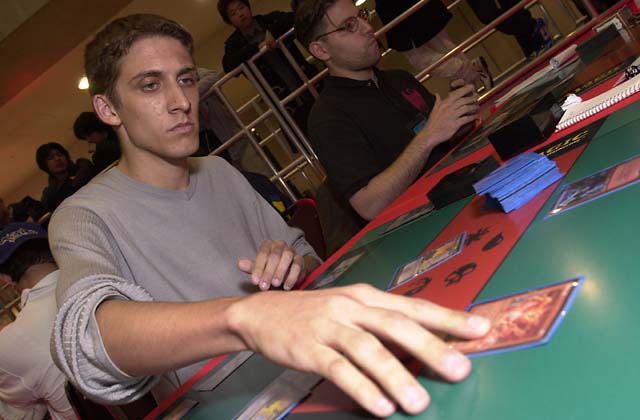 Pat Chapindrew more land, he had no chance. A couple of Crosis hits later, Chapin was on to Day 2 and Long wasn't.

After the match, the players lamented the fact that they didn't get to try out the matchup with a real game. Chapin felt he was happy to get paired against a black/red deck but Long felt after sideboarding that it was actually he (Long) who had the advantage. They wound up playing a couple more games after the real match just to find out who was actually right. Chapin declined Long's offer to play for ante and they instead played just for glory. The glory was Pat's.