The first feature match of the Standard portion of Japan Nationals 2001 pitted 12th-place Satoshi Nakamura, a familiar face to readers of the Sideboard, against 16th-place Reiji Ando, who vaulted into the spotlight at Tokyo Masters as a member of Panzer Hunters. Both Ando and Nakamura are looking for a win to allow them to move up in the rankings and put them in range of the Top 8. 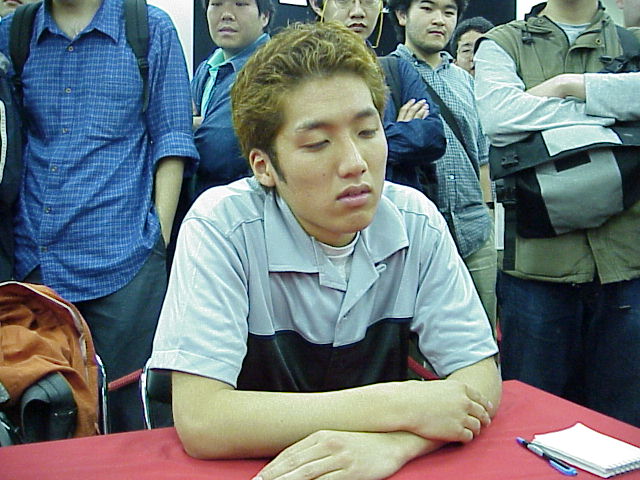 Reiji Ando catches up on his rest before his feature match beginsNakamura has chosen to play the popular Opposition-Orb deck, using green for creature generation with Saproling Burst. Ando is playing Fires. In game one, Nakamura responded to Ando's Chimeric Idol by putting put the game on his terms with a third turn Tangle Wire, giving him time to build up his mana base while slowing Ando's offense. Nakamura was able to get his combo together quickly, following a fourth turn Opposition with a fifth turn Saproling Burst, quickly taking control. However, Ando's deck provided him with an immediate threat in the form of Blastoderm, whose untargetability makes it untouchable by Opposition. Ando chose not to attack for a few turns, waiting for the counters on Nakamura's Burst to dwindle before playing one himself. Nakamura was able to keep the pressure on Ando with an Air Elemental and Chimeric Idol of his own. By the tenth turn, the Red Zone was getting crowded, with multiple Saproling tokens, Elves, a Blastoderm, the Elemental, and Chimeric Idols getting jiggy with it. 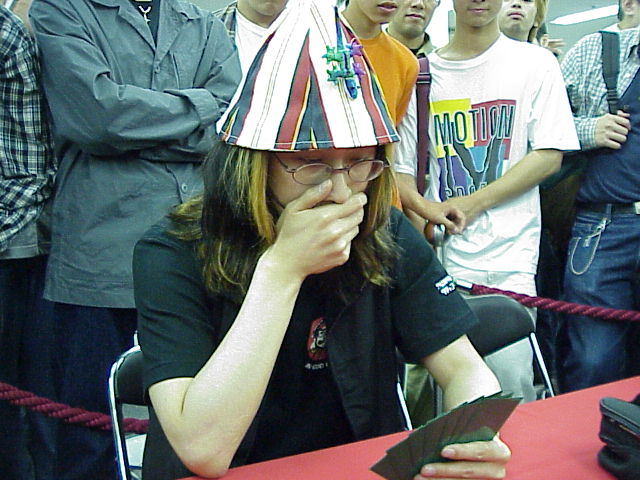 Satoshi NakamuraWhen the dust settled, Nakamura was left with an Idol and the Elemental, while Ando had two Elves and a counterless Blastoderm. Ando evoked a strong reaction from the sizable crowd by playing a second Burst, but it was nothing compared to the reaction Nakamura got when he too played another Burst. Ando upped the ante by putting out Fires of Yavimaya, forcing Nakamura to use up his Burst to generate blockers. Running low on life after multiple sorties by Ando's creatures, Nakamura was careful to lock down Ando's red mana, preventing him from playing Flametongues or any direct damage. Finally drawing into the last piece of his combo--Static Orb-Nakamura locked down Ando with his remaining tokens, leaving the Air Elemental and Chimeric Idol ready to swing. However, he was unable to draw another Burst, and was forced to leave the Idol and Elemental back for defense, tapping Ando's creatures. He was able to buy time with a Tangle Wire, but was reduced to one life by a pair of Assaults from Ando. Realizing he needed to take the offensive, Nakamura played a second Elemental, in response to which Ando conceded. 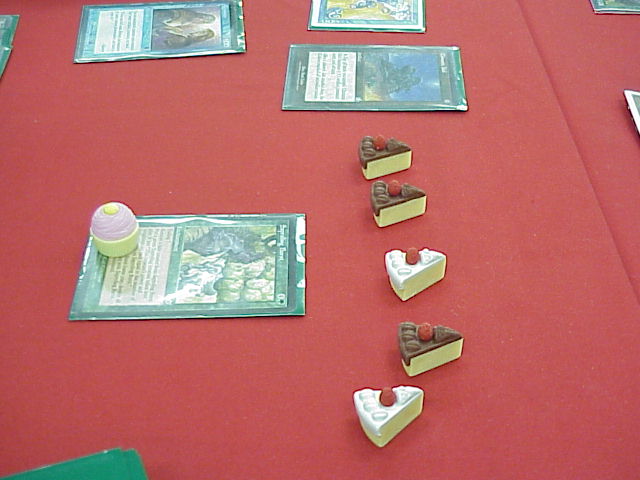 Saprolings--they can attack, block, and also serve as a desert topping!As the first game took over 35 minutes to complete, both players began sideboarding and shuffling quickly. Ando played defensively the second game, taking out the Birds and Elves Nakamura played with direct damage and using Ports to lock out his green mana. Nakamura was finally able to get out a Chimeric Idol and Tangle Wire, blunting Ando's momentum. The game ended in quick fashion when Nakamura was able to play an Opposition followed by a Saproling Burst. Ando waited for his next draw, hoping to get a Hull Breach, but conceded after drawing a land. Compared to the first game, the second seemed to last only second, and indeed was over only 5 minutes after the first ended.