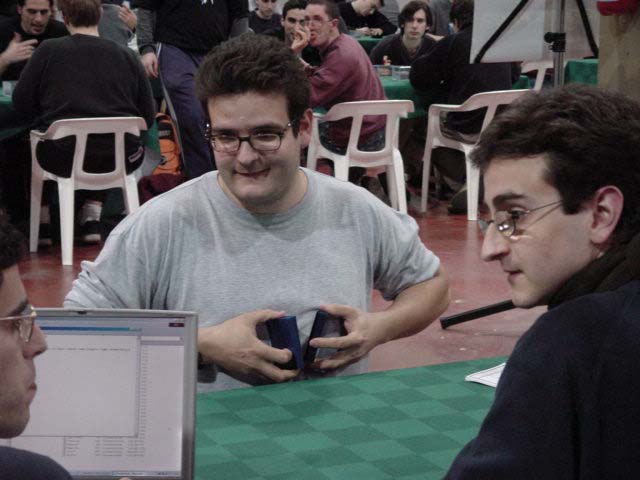 While at other tables some players fought desperately for a spot in the second day, two very quiet - for a change - Spanish players sat down for a feature match in the final round of day one.

The game started off with a Mulligan from Roc. Sergi dropped a Nightscape Familiar and gave it a cushy Sleeper's Robe while Roc played an Stalking Assassin. The Robe worked only once before Roc Repulsed the Familiar.

Sergi felt the Assassin was a threat strong enough to warrant an unkicked Breath of Darigaaz. Roc took the time to cast a Worldly Counsel, for two, looking for some extra help while his opponent played a Shoreline Raider. Pont then took a few moments to consider what spell to play. He ended up choosing to drop his Sea Snidd first, instead of the Urborg Emissary, which was probably a good option since the Snidd's Soul was promptly burned away.

With a hand full of six mana spells (if you included kicker costs) Roc needed to find another land but he could still play his Urborg Emissary. Sergi played a Lord of the Undead and replayed his bounced Raider burning for one since he forgot that the cost was reduced due to the Familiar he already had in play.

The arrival of Roc's Halam Djinn was so scary that Sergi used the Raider for a very random chump block. If that sounds strange wait until you hear about the next play: during his turn Sergi sacrificed his Familiar to cast a Death Bomb targeting the Djinn!

After this awkward situation Roc showed another threat. A smaller, yet scarier threat: Doomsday Specter! But his low life total still forced him to find immediate solutions for troublesome spells like the Vodalian Serpent (with kicker). He used a Rushing River to bounce both a Lord of the Undead and the Serpent. He then ripped the Lord away with the Specter.

Sergi still found a Lava Zombie, to go along with his Nightscape Familiar but Roc found a Cinder Shade, which led to another strange play. Roc used the Shade to block the Zombie, pumped it, and used it to shoot the Familiar. Unexpectedly Sergi decided not to regenerate the Familiar, which raised several eyebrows (especially Roc's). A Zap finished the Lava Zombie after Sergi's Vodalian Serpent returned to play.

The kicker of Agonizing Demise targeting the Serpent put a huge dent on Vidal's life total which an Urborg Emissary and the Doomsday Specter quickly reduced to zero.

Sergi opened with a Ravenous Rats and Roc responded with a Urborg Emissary. The two creatures ignored each other since Sergi, for some reason, refused to let the Rat sit back in defense. He even bounced the Emissary with a Rushing River and then kicked up a Probe to slow Roc down but to no avail. Pont's hand just kept following, including the return of the dreaded Doomsday Specter.

This time the Specter did not hang around for long. He was taken down by a Soul Burn. The next ideal play for Roc would be the Duskwalker but he couldn't find the second black source. He had to settle with replaying his Urborg Emissary bouncing Vidal's second swamp. Next turn Vidal cleaned the table with a Breath of Darigaaz (no kicker) and dropped his own Emissary.

Roc played a Dromar's Attendant and when Sergi blocked with his freshly cast Hunting Drake it looked as if the late hour and the exhaustion had finally caught up. However he did have a plan: he tried to Singe the Attendant but Roc Repulsed his own creature to save it. This massive card advantage turn spelled the end for Sergi.

Pont went on a rampage: Zapped an Emissary, dropped a Firescreamer, played Probe with kicker while Vidal could only look on in despair. In the end Sergi was left with no cards in hand and only lands in play while Roc's hand was so good he discarded a Dromar's Attendant and an Agonizing Demise to the Probe. That is simply how good is hand was. 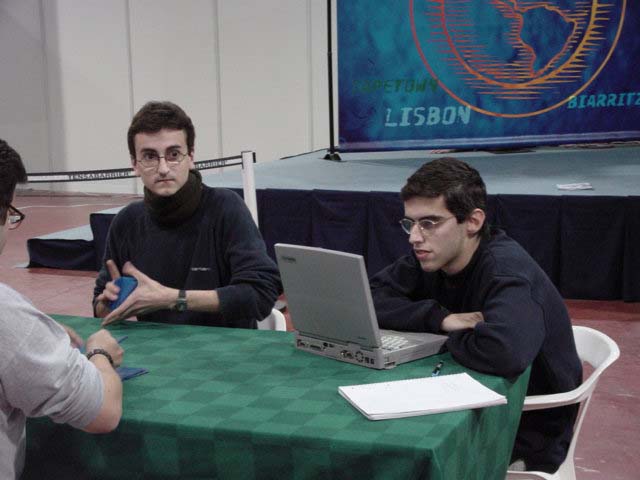 From then on it looked purely academic but they still had a small surprise in store for us. Sergi dropped a Vodalian Zombie to block the Firescreamer to which Roc responded with an Halam Djinn and a Terminate for the Zombie.

Sergi had one draw phase to save himself. While he didn't achieved this, he managed to get everyone, apart from a few judges, around the table completely confused. To explain the situation I've recruited the invaluable help of Friedrich Rademacher:

The situation:
Halam Djinn gets -2/-2 as long as he shares the most common color or is tied for it. In play were one Firescreamer (black) and one Halam Djinn (red). The Exotic Curse is played on the Djinn. Exotic Curse reads: enchanted creature gets -1/-1 for each basic land among lands you control.

The explanation:
Both these effects are continuous effects. When Exotic Curse comes into play, both the Djinn and the Curse's effect start working. Therefore they start working at the same time, so that the Djinn doesn't get -2/-2 (from its innate ability) anymore and gets -3/-3 (from the Exotic Curse) instead. The Djinn never dies and becomes a 3/2 creature.

As soon as the ruling was cleared, Sergi promptly conceded. He knew he had no way to save the game.