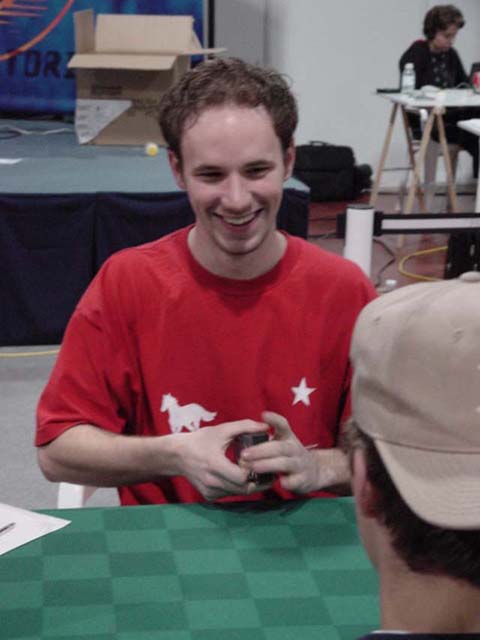 There is a lot in common between these two players, both of whom were on 6 - 0 and hoping for a perfect record going into the draft day tomorrow. The two are firm friends, both resident in Amsterdam, although Ryan is originally from Burnaby in Canada. Also they are both members of the same team, "AlphaBetaUnlimited.com" along with Chris Benafel, the winner of the previous European Grand Prix in Amsterdam.

Ryan opted to go first in game one after winning the toss, and allowed Noah to sit facing the clock to make it fair. Ryan had to mulligan in the first game and kept a one land hand. He didn't draw a second land by turn two, but did draw one turn three. Noah cast a Ravenous Rat and a Vicious Kavu, while Fuller missed another land drop.

The creatures dropped Ryan to fourteen lives, and Noah used his Cavern Harpy to replay his Rats - forcing Ryan to discard Zanam Djinn. Fuller played a Lashknife Barrier, and a Shoreline Kavu, enabling him to hold off at least some of the damage, although the Cavern Harpy did reduce him to ten life.

Noah was really making Ryan pay for his mulligan as a Thunderscape Battlemage forced him to discard another two cards - his fourth enforced discard of the game. With Ryan reduced to only two cards in hand, and Noah holding Fact or Fiction, things were looking bad for the American. 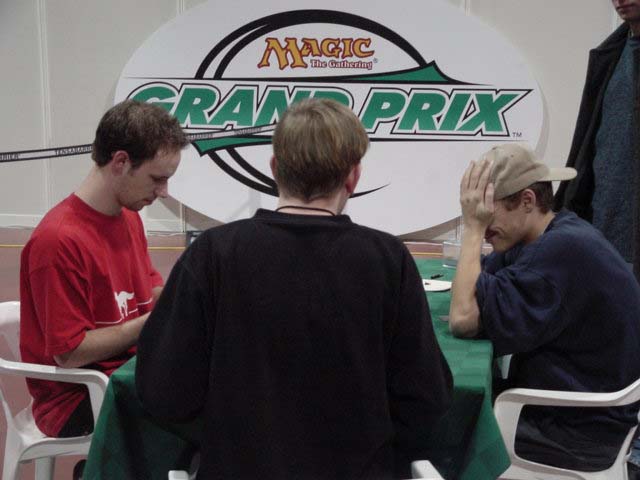 However, he had a try at turning things around when Ryan drew and cast a Crosis the Purger, although Noah could quite easily hold it at bay with the Cavern Harpy anyway. Boeken used a Fact or Fiction to fetch a Reckless Assault since he was so far ahead on life that he could simply kill Ryan with it, which is exactly what he did on the next turn.

Both players were happy with their hands in the second game, and dropped early creatures, with a Galina's Knight from Ryan and a Shivan Zombie from Noah. The protected creatures traded blows for a couple of turns until more monsters were cast by both players.

Ryan played a Benalish Trapper and a Faerie Squadron, and Noah played Mire Kavu, Ravenous Rats, and Kavu Scout. No further damage was exchanged until Ryan found an Ertai the Corrupted, at which point he started attacking with the Faerie Squadron.

Fuller's entire hand was discarded to a Probe with kicker, which prompted Ryan to immediately go on the offensive, attacking with Ertai the Corrupted, Faerie Squadron, and Galina's Knight. The Ertai was killed by Kavu Scout and Ravenous Rats, and Noah took five, going down to six.

But this was the point where it seemed Noah was gaining control, with his extra cards in hand showing as he cast Exotic Curse on the Faerie Squadron, leaving Ryan with just the Knight and the Trapper. He managed to find a great card on his next turn, Zanam Djinn.

The Djinn was killed by Death Bomb, but Ryan topdecked again on his next draw phase - probably the best card for this situation with Ordered Migration. This meant that the Rushing River in Noah's hand was insufficient to remove all of Ryan's blockers, and it looked like the Galina's Knight would finish Boeken if Ryan got one more turn. Noah cast Fact or Fiction after his attack to try and find an answer, but he was one mana short of being able to cast Recoil, and conceded the game.

It was Noah's turn to go first in the third game, and his opening draw had only two of his three colors of land. He could not find a Swamp for the first few turns, whereas Ryan wasn't doing much either, only playing a Lashknife Barrier in the first four turns. He did play a Waterspout Elemental on the fifth turn though, and with Noah still not having drawn a Swamp, things were looking good for the American.

He attacked with the Elemental, and played an Ertai the Corrupted as well, commenting "My opening draw was full of fat, I just needed to draw some land, and I did."

Noah finally drew a Swamp, and cast Exotic Curse on the Waterspout Elemental, turning it into Counterspell fodder for Ertai. Ryan certainly wasn't out of great creatures at this point, summoning a Voice of All. 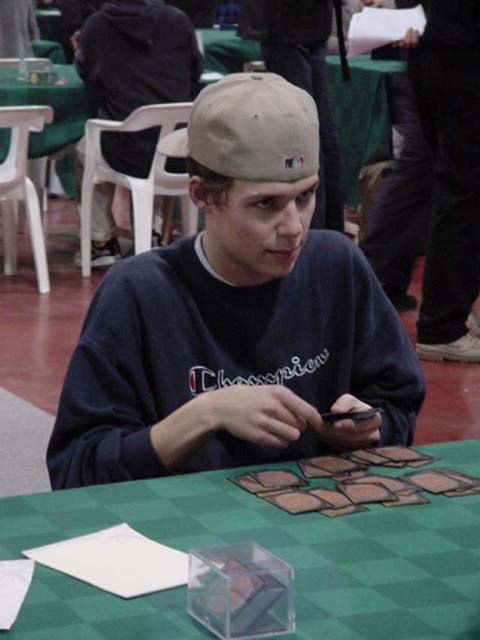 Boeken couldn't find any creatures big enough to deal with the Ertai, and when Noah cast Thunderscape Battlemage, the cards that Ryan discarded - including Urborg Emissary - suggested that Noah was in trouble.

Ryan cast Deliver to return the Exotic Curse to Noah's hand and attacked to reduce him to six. Noah had a good hand though, with the possibility to cast Rushing River and other spells because of the Nightscape Familiar he had cast.

Ryan tried to Confound the Rushing River, but Noah cast Prohibit on the Confound, and attacked for four himself. Ryan replayed the Waterspout Elemental and also a Samite Pilgrim, and Noah then cast Exotic Curse on the Elemental and attacked to bring Ryan down to nine.

Noah was hoping for an opportunity to use Death Bomb and sneak through two more damage, but it was difficult with Ertai the Corrupted there to counter anything dangerous. Ryan replayed the Voice of All, and a Faerie Squadron, and Noah had a last-ditch effort to cast Death Bomb on the Ertai, but Ryan countered it and Noah extended the hand.