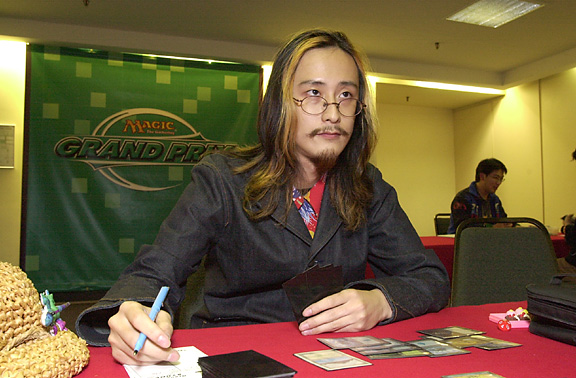 With both of the Japanese players on the record 5-1 they have to feel a little unlucky. Flying all the way from Japan after GP Kyoto to play GP Sydney and being paired together in the final round of Day 1probably isn't what they had in mind. Before the match the two players inform me that the exact same situation occurred in GP Kyoto where they where paired together in the final round of Day 1. At least the two players knew that the loser would still make Day 2, having won the die roll Yamakawa chose to play first.

Electing to keep a one land, Mox Diamond hand and Vampiricing for a Swamp seemed a little dangerous but it was paying off for Yamakawa. Nakamura had an explosive start with his Turbo-Land deck playing turn one Exploration, Island, turn two Horn of Greed. When Yamakawa drew a Swamp off the top on his turn 3 to cast his Necro everything seemed to be going to plan for him. After paying 6 life, he sent the turn to Nakamura who played another land, drew and dropped a Scroll Rack. As a consequence, Yamakawa was forced to wait another turn to get more protection for his combo and Necroed for another 9 cards. After Impulsing during Yamakawa's end phase, Nakamura then had his second Exploration Annulled, played a Wasteland, and removed Yamakawa's Gemstone Mine from play. Quickly running out of time to go off because of the Scroll Rack, Exploration, Horn of Greed combo that was netting Nakamura a fist full of cards, Yamakawa Consulted for a Duress. When Nakamura Arcane Denied the Duress, Yamakawa forced through the Illusions, Necroing down to 13 life. Nakamura then floated UG and Gushed which Yamakawa Forced, he then summoned a Feeder, which made it into play uncontested. Almost unable to go off twice because of the Consult, Yamakawa had no choice but Donate the Illusions and to try and Firestorm the Feeder and Nakamura, and when it was countered he conceded. 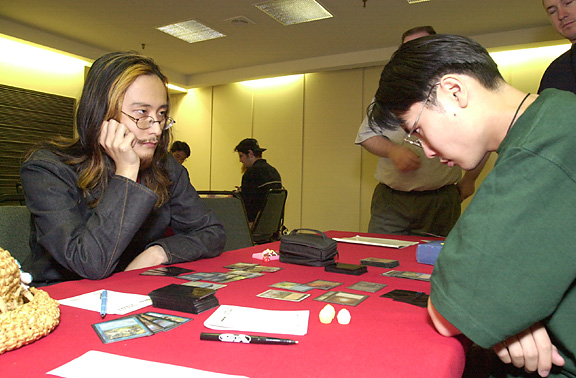 Siding out his combo for the Negators, Yamakawa chose to go first again in game two, and started out with a first turn Duress. Nakamura had a great hand with Gush, Impulse , Forest, Island, Island, Exploration and Feeder. Yamakawa seemed happy with this and chose the Exploration, but Yamakawa drew another off the top and cast it. On turn 3 the advantaged seemed to sway Yamakawa's way when he summoned a Negator. Satoshi Gushed for an answer floating UU in his main phase, and an answer he found. He cast a Hunted Wumpus, which is rarely seen in this Extended format and even when Yamakawa dumped another Negator from the Wumus effect, he was in major trouble. With 2 cards in hand Yamakawa Consulted for Perish and lost about 3/4 of his deck, and when the Perish was Force of Willed, Yamakawa gave it up.