Round 7 Feature Match: Shining Bright on the Nationals Stage

Patnik, a former Team CMU prodigy who holds a 0-1 lifetime record against me in Prereleases, comes in 4-2, with Craig Krempels, former U.S. National Champ and TOGIT property through and through, at 5-1, so Day Two implications and a good night's sleep hang heavy in the air - especially for Patnik. If he wants to repeat his 2005 alternate-on-Team-USA performance, he'll have to negotiate the dangerous curves that are Krempelsville.

Patnik dropped the bomb on turn four: Fertile Imagination for creatures, which netted six individual Pro Player tokens. Craig answered with Streetbreaker Wurm, which met an immediate Faith's Fetters, nuthin' to it but to do it. 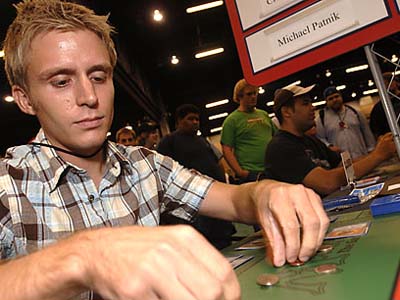 With that minor problem solved, Patnik sent his li'l guys into the fray, and tattooed Craig's dome with a big, fat "get a move on it, dawg."

"Crime for zero" from Craig ended so much noise for two mana that it should be a rare, and not only made Krempels immediately awesome at Magic, but a Zeppelid came down to make him even better. What looked like a blowout still looked that way, but now for a different guy.

Patnik sent in his team, which prompted a "man, what do you have!?" from Krempels. After combat came the answer: Aquastrand Spider, a bit anticlimactic, though Patnik always had a flair for the dramatic.

It's stalemate city for a few turns until Patnik recruited Minister of Impediments. Craig added another Zeppelid and stole some graft while he's was at it - finally, his air force threatened to grow too large for one tapper and a spider to contain. Patnik took a long look at the board, seemingly with an answer in hand, and he did guard his hand rather jealously, but his answer was not yet to be revealed.

His Supply for six further clogged up the board, but without a definitive answer (sans the spider eventually dying) to at least one Zeppelid, Craig maintained the upper hand.

Patnik asked to see the Plaxmanta in Craig's hand, apparently, holding some sort of something… eventually. "What the hell is the bomb in your hand?" was the question of the day; inquiring minds wanted to know. Now! 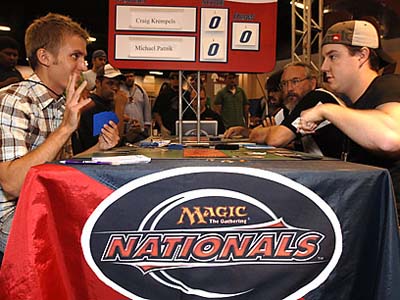 Both players were at ease on the Nationals stage.

Down to nine, Patnik's answer (or lack thereof) happened right now: he began to tap all his guys, thought better of it and thought some more. Then each and every clown went in, and they wore a face of determination. Complicated declare blockers step much? Six tokens made it through and we all awaited the game breaker…

Patnik put the D on the S, Seed Sparked his Signet, and grafted a counter onto each fresh body. With eleven creatures, four untapped plus Minister, Patnik appeared set to overrun for the win next turn.

Plaxmanta hit and Krempels dug in and prepared for the worst. At six life and outnumbered ten plus a tapper to six, the end was nigh. But for whom tolls the bell? And what the hell was this game-winning bomb?

Patnik tapped a flyer end-of-turn, drew his card, counted up the creatures (twice), tapped Kudzu, and then sent in the entire team, which elicited a scoop.

Apparently, Patnik's "bomb" answer was simply this: make more guys than you and beat you in the head, neck, chest and breast area until you are indeed quite dead. Seemed like a good play, though not quite as exciting as a bomb rare.

The boys accelerated for a few turns, Craig with a Signet, Mike with Farseek, each anxious to get the early action. Krempels went one further with Civic Wayfinder, who wayfound a land and planted two points of love on Mike's grill. Streetbreaker Wurm joined in the fun and put a serious clock on Patnik. Shockingly, it met a Fetters because Mike is not only very good at Magic, but pretty damned handsome as well.

Kudzu and Starfletcher joined Craig's side and kept on the pressure. Patnik, with no creatures, answered with Nullmage Shepherd, who single-handedly held off Krempels's team. But his guys did do an excellent job of convoking out Siege Wurm.

"One-sided" might describe the board at this point, with Craig enjoying a 4-1 creature advantage, but Patnik took five from the Wurm, Scattered his way to three fresh bodies, and equalized the board in one fell swoop. Sorta.

Mike's Gruul Nodorog further complicated matters, but the tide appeared to be shifting ever so slightly to his advantage. However, the Wurm ain't tryin' to hear 'dat, and into the zone went the fatbody. Mike took another five (down to 10), and Craig dropped another Streetbreaker into the mix, which apparently shifted the momentum his way again.

Ulasht, the Hate Seed hit as a 5/5 for Patnik, and guess what: momentum swing. 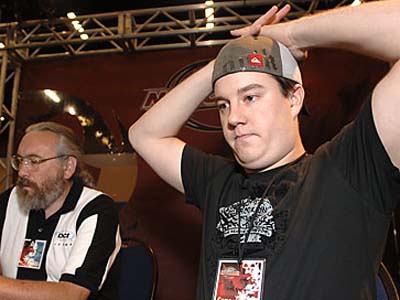 No easy answers came to Krempels in Game 2.

Craig sent his fat asses into battle, and with only two untapped mana, Patnik had a complex blocking path to negotiate. When the dust settled and the blood had dried, four of Mike's guys died to take out Siege Wurm. Craig dropped Plaxmanta, not ready to let up, while Mike appeared slightly vulnerable again, for the tenth time this match.

Minister and Transluminant came down to stem the bleeding, and it certainly slowed the pace, as only Streetbreaker went ninety. A double-team later and that 6/4 problem got solved. All Craig could bring was Tin Street Hooligan.

Patnik dropped Primordial Sage, which put a hurtin' on Craig's entire team and might, if unchecked, allow Mike to draw cards like he was the love child of Matt Cavotta and Greg Raymer. Advantage shift again, but wait: Craig cast his own Scatter and who the hell wants to win this game more?

Borborygmos hit the table, drew Patnik a card and gave him the title of "the guy who dropped more fat than Oprah at a Kirstie Alley contest."

Golgari Guildmage hit for Krempels, and indicated that he had some long game his own damned self. However, Patnik tapped a guy and cast Kindle the Carnage with one card in hand…

The board was completely reset, well, um, except for Patnik, who kept Borborygmos and Primordial Sage to Krempels' complete and utter and absolute nothing. One turn later, facing enough lethal damage to kill any player within a 20-foot range, Krempels scooped them up.