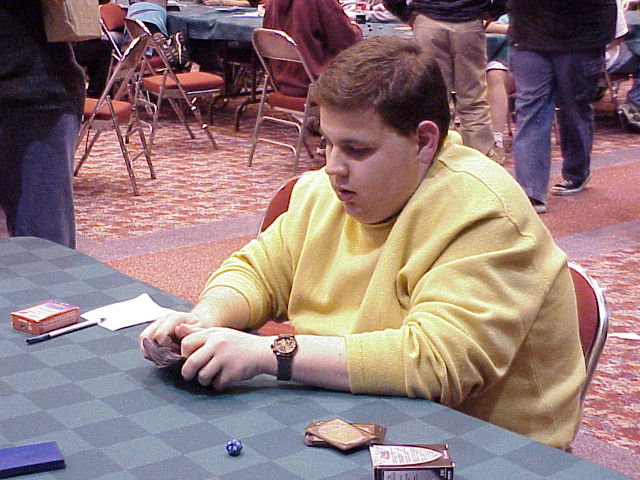 Round Seven of Grand Prix New Orleans saw quite a number of draws amongst the higher ranked players. It's odd that in such a competitive sport, the friendly fraternity of Pro players isn't interested in trying to defeat their opponent at the end of the day, but rather to retire early, get some rest, and enjoy the beautiful scenery of the jewel of the Mississippi. This made picking feature matches quite torturous, as the first two picks both decided to draw their ways into Day 2. Finally, a match where both players were guaranteed Day 2 was located, and they were invited to the center of the room for some mortal combat.

Steve's deck was a green/white/red deck full of beasts and removal, featuring Rith - an elder dragon that has the best ability of any of the dragons. Koby's deck was black/white/blue, and featured a good mix of spells and creatures, with no breakout spells like Rith. Steve played first, and his early plays were dropping land, and using removal on Koby's tappers and fliers. He Tribal Flamed Koby's Rainbow Crow, Lightning Darted a Benalish Trapper, but he was sitting on three land, and no white mana. Eventually, faced with a kicked Faerie Squadron and an Urborg Drake, he had no choice but to blow a cantrip to try and draw the imperative white mana source that he needed to cast his own tappers. He Aggressively Urged the Faerie Squadron, breathed a sigh of relief as he drew the Plains he needed, and then used Tribal Flames for 3 on the kicked up Faerie Squadron. Both Koby and Steve missed the misplay, and the Faerie Squadron made it's way to the graveyard. A judge was called, and the situation was rectified. This play basically blew the game for OMS, as even though he was somewhat able to stabilize, even with the playing of Rith, a Wings of Hoped Obsidian Acolyte, that very same Faerie Squadron, and the Urborg Drake were able to get by for the win. 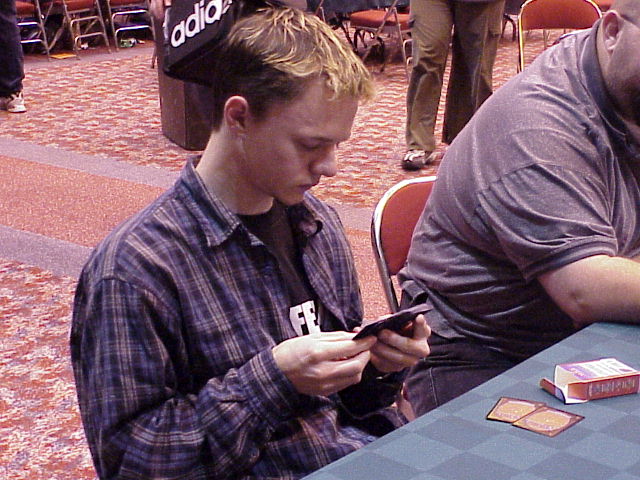 Game 2 was anticlimactic compared to the drama of game 1. Steve mana stalled again, and suffered through some early blows by Kennison, but eventually he played out Rith, a card which Kennison could draw no answer for, even after Probing.

Game 3 was similar to game 2, as it drew down to the wire on time. The board was covered with creatures, but it was dominated by Rith, and none of Kennison's creatures could trade with the mighty beast, especially with a pesky Obsidian Acolyte helping out the OMS team. Eventually, Rith sealed the victory for Steve, sending him into an extremely good position for day 2.